Live at CPA: Workforce tactics in a tight labor market

Tom Landry, Allegiance Staffing, illustrates simple but effective tactics to get more throughput out of your workforce, limit overstaffing, and reduce overtime. 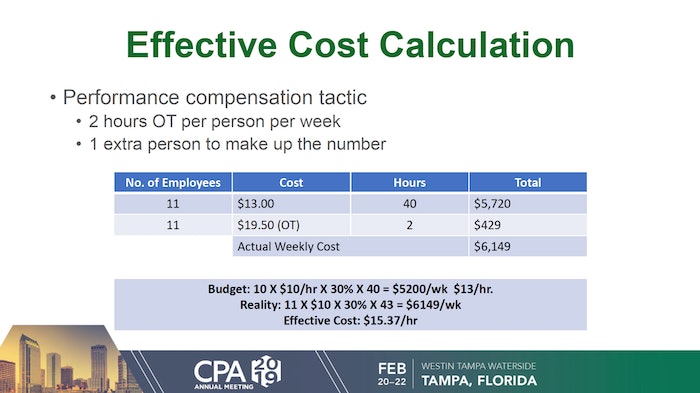 Tom Landry, president of Allegiance Staffing, delivered the bad news first: the labor market is tight and getting tighter with a national, seasonally adjusted unemployment rate at 3.9%.

“Unless you’re in West Virginia or Alaska, thinks are pretty tight,” Landry says. “And that isn’t going to change anytime soon.

And the 2018 elections seem to be shifting some of the balance of power toward labor.

Landry illustrates some compensation tactics that contract packagers and brand owners have used over recent years to navigate the small labor force waters.

“Engineered labor standards say it’s supposed to take X number of people to generate Y amount of product or throughput, but we’ve learned to accept less than that, and to compensate for it,” Landry says. “That means there are opportunities there that we’re missing, and if we go back to square one, we can realize those gains again.”

The good news, he says, is there are ways to combat this slippage. In the case of added personnel and overtime, consider a situation (See graphic 1) where a contract packagers adds an extra person, and adds 2 hours of overtime per week. While this doesn’t sound drastic – 11 employees instead of 10, and 2 hours of overtime. But the budget reflects 10 people on a 40-hour work week. The effective costs then grow from $13/hour/person to $15.37/hour/person.

“Instead of hiring more people and doing overtime, identify the guys out of the original 10, who the most critical guys are, guys that the line can’t function without. And ID the less efficient guys, the ones who are likely to be turnover anyhow,” Landry says. “Instead, let’s take care of the people who are critical and deal with mitigating the effects of those that aren’t critical. Promote two of your critical guys, pay less for your non-critical guys, and avoid overtime and extra employees.” (See graphic 2)

Landry also suggested looking for talent among convicted felons on work-release style programs, saying they can be reliable since they’re legally bound to be at work reliably.