If shoppers don’t see your product, they won’t buy it. Makes sense, right? But did you know that your product can be invisible even if it’s on store shelves?

It’s an obvious concept: Warehouse goods unseen by the public aren’t purchased. If an item isn’t on the retail shelf, a consumer can’t buy it. Simple enough.

But did you know that your product can be invisible (i.g., not purchased) even if it’s on store shelves?

How can that be?

Our research team decided to investigate; the subject was pasta. The group conducted a consumer research project to test the quantitative and qualitative aspects of boxed macaroni and cheese dinners (yum!). A total of 227 participants were given a shopping list of five items and asked to shop as they normally would. They were unaware of which item was being studied.

Before entering the test store, participants put on eye-tracking glasses that were calibrated to their eye movements. The glasses capture eye movement at 50 times per second, providing highly accurate results. As participating shoppers made their selections, they wrote down the special code associated with the product of their choice. When they were done, they turned in their list, completed a survey, and received an incentive for their participation.

The pasta planogram featured 31 different SKUs that included national brands like Kraft, Velveeta, and Cracker Barrel, and store brands from several regional grocery stores. There were a variety of flavor options represented, as well as some organic choices. 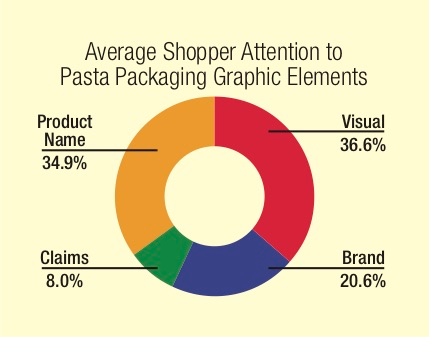 At this point, you might be asking: What did they look at? How did that impact their decision? And how can this impact your own product’s packaging?

While attention to SKUs helped the researchers understand sales at a product level, a deeper dive into what was printed on the cartons provided even more interesting revelations. Obviously, there were significant graphical and visual differences among the 31 pasta cartons, but statistical analysis revealed that the graphic style of the product name combined with the presentation of the visuals drew more than 70% of the total attention on a package. The designer’s interpretation of the product captured participant attention more than the lure of name brands or marketing claims––and the packages that captured attention were the ones that were purchased.

See: Pain Brings Gain: Packaging Redesign is Worth the Risk

Granted, there’s more to consumer purchasing decisions than how a package looks, and this was a relatively small study. Despite that, the results are still valid: Consumers bought the package that captured their attention. After looking at a few choices, the majority of them bought one of the top three attention-getters. By and large, they didn’t even look at the remaining 28, essentially rendering them invisible. They bought what they saw, and they only looked at a few specific elements.

Making your product more visible can involve completely redesigning an entire line. An article in the September issue of Packaging World described how St. Louis-based Schnucks Markets redesigned their own-brand products. They started with their cheese, switching from generic white to eye-catching green packaging that stood out among the reds and blues of national brands. Conversely, for their carbonated beverages, they opted to keep similar colors as the national brands but added quirky illustrations to indicate the flavors.

Increasing product visibility can also be as simple as tweaking your current package design. Our team was approached by a company that had been told their allotted retail shelf space was about to be drastically reduced due to steadily declining sales. After a series of A/B studies, the design was tweaked to feature a smaller logo, a larger product picture, and a slightly different font for the flavor, and the next quarter saw a dramatic increase in sales and no reduction in shelf space.

Unseen is unsold. The packaging consumers look at is just as important as the product itself, maybe more so. It won’t matter how life-changing the product is if consumers aren’t buying it.  While myriad factors contribute to slow sales, one of the easiest to assess and test is package design. It’s not a blanket fix, and every market and product category is different. You should establish a hierarchy of what’s visually important to your market audience to make sure your product is seen because if consumers don’t see your product, they aren’t very likely to buy it.

Do you know which side of the equation your products are on?

To find out more about what we know about macaroni and cheese, see our interactive dataset here.

Dr. R. Andrew Hurley is an Associate Professor at Clemson University. Contact him at me@DrAndrewHurley.com

ProAmpac is partnering with the Clemson University Department of Food, Nutrition and Packaging Sciences to support its commitment to leading the industry in developing smart food packaging.
ProAmpac
Mar 1st, 2021

Auburn University’s College of Agriculture and its Department of Animal Sciences are teaming up with packaging manufacturer and distributor Winpak to focus on research to extend the shelf life of meat and food products.
Winpak
Feb 26th, 2021

D2C company Sundays Dog Food chooses cereal carton-style box for its air-dried pet food, leaning in to the nostalgia of the format with its graphics and brand strategy.
Anne Marie Mohan
Feb 25th, 2021

Throughout its history, corrugated board has been known more for brawn than beauty.
Sterling Anthony
Feb 23rd, 2021