This trio of new paper-based packaging applications might seem counterintuitive since the product is liquid. But when paired with a plastic liner or pouch to act as a barrier, paper as a base substrate can make sense for a lot of different reasons.

Hello, I’m Matt Reynolds, Editor of Packaging World, back with another edition of Take Five.

We’ve been monitoring a lot of material substrate changes lately, and it seems no incumbent package style is safe from scrutiny as brands’ R&D departments find out if there’s a more efficient or sustainable way to do it. Today I’m going to look at the recent rise of paper packaging in a trio of places you wouldn’t logically expect to see paper—all liquid or viscous product applications.

The first is a shampoo and conditioner sample pack application from Estee Lauder’s Aveda, another is a “Bag-in-paper-bottle” application replacing a traditional glass spirits bottle, and the third—completely new to the market—is a paper-based bottle cap and closure for glass bottles. All of these applications are paper, but rely on a thin, lightweight plastic liner or pouch for barrier properties.

Late last year, Aveda partnered with co-packer Xela Pack in the development of what the all stakeholders say is prestige beauty’s first-ever paper-based, locally recyclable sachet or packet. Also involved in the partnership is Gentile Packaging Machinery (GPM), the OEM responsible for the form/fill/seal-style machinery built to run this proprietary package format.

Aveda says the new pack design, is a superior solution for sampling applications. They’re curbside recyclable in European and the U.K. at the end of the sample pack’s life, and the brand and suppliers are working and iterating on the concept to achieve a similar certification here in the U.S. –they say they’re not far off.

The sachet itself is a proprietary foil-free lamination of paper and EVOH. The paper is a 10-point C1S paperboard format, flexographically printed on one side, and coated on the other with 2.5 mil of EVOH. It’s actually a multi-poly lamination that uses EVOH for the barrier, but details on the tie layer remain proprietary.

The packs were studied in detail through a peer-reviewed life-cycle assessment, which calculated a reduction of 36% to 68% in water consumption and 37% to 64% in emissions, measured in CO2 equivalent, when compared to multi-layer laminated sachet structures commonly used in the industry. Such sachets, which this paper packet replaces, are typically made by combining layers of polyester, polyethylene, and aluminum, and they are not commonly curbside recyclable due to their laminated multi-layer construction, flexible nature, and small size.

A new paper bottle, maybe better described as a “Bag-in-paper bottle,” is being commercialized this month in Sweden. The brand is Buen Vato, a Jalisco, Mexico-distilled tequila that’s the result of looking to reduce the environmental impact of transporting heavy, filled glass spirits bottles across the Atlantic to Sweden. In this model, the tequila is bulk shipped to the Netherlands, where it’s filled into a paper bottle with pouch interior.

The format is functionally bag-in-box. In this case, the “box” portion begins as a die-cut and geometrically creased blank of printed paperboard. Being printed paperboard, no additional labels—or labeling equipment—are necessary. The rigid bottle is formed from a blank made of one flat piece of paperboard, and water-based adhesive used as part of the assembly process. The paperboard is then molded around a mandrel-shaped, hollow mold that has already had the pouch inserted within.

The pouch could be several different materials, but in this case it’s a metalized polyethylene. The whole system is called Frugal Bottle, from UK-based supplier Frugalpac.

For the consumer in Sweden, it’s easy to recycle by separating the plastic food-grade pouch from the paper bottle, and putting them in their respective recycling bins. Or, consumers can put the whole bottle in their paper recycling bin and the pouch will be easily separated in the paper re-pulping process. Again, this is based on the Swedish recycling system.

You’re not talking about spirits in Sweden without mentioning Absolut. Sure enough, the Pernod Ricard brand is working on an interesting paper-based packaging concept that we’ve mentioned on Take Five in the past.

This is a press formed, paper-based cap and closure with easily separable, thin plastic liner for a barrier. The brand is still in the prototyping and iterating phase with supplier Blue Ocean Closures, but the two stakeholders expect a release of a commercialized product into the market next year. Importantly, the paper-based cap and closure is intended to work on existing glass bottles, and on existing capping equipment. These paper caps are intended to complement, not replace, the existing aluminum and plastic closures currently used by the brand.

It's important to note that all three of these paper-based packaging initiatives reduce plastic and replace it with what they say is a more renewable, more recyclable material, but they don’t eliminate it entirely. Plastic’s barrier properties when it comes to liquid and viscous substances are hard to understate.

That’s all the time we have for this edition of Take Five. 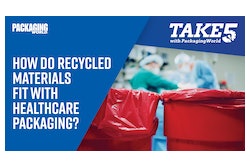 How Do Recycled Materials Fit with Healthcare Packaging? 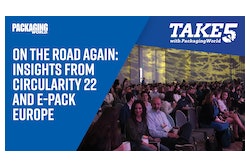