Random observations of interpack 2017 after a busy day one range from new thoughts on checkweighing of soft drinks in PET bottles to new initiatives involving Industry 4.0. 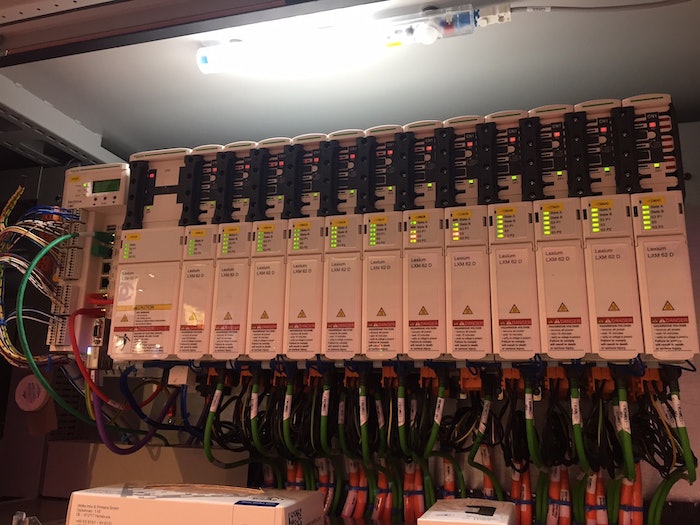 Servo drives are the secret to the Loesch Pack fold wrapper.

Checkweighing of filled packages has been a tried and true quality control step for decades. But in especially high-speed applications like filling PET bottles with soft drinks, the speeds are so high that checkweighing bottles becomes impractical. So Wipotec at interpack debuted an indexing star wheel system called the HC-A-IS-WD that lets a soft drink producer—or fillers of just about any high, slim containers—quickly check a desired number of bottles at a desired frequency right in the plant. Thanks to the open and easy-to-clean balcony construction and an IP69K rating, the system can be located right out on the plant floor rather than in a QC lab. A major soft drink company is said to be the first customer.

Interest in the Internet of Things / Industry 4.0 is still high, and plenty of exhibitors at interpack have strategies or initiatives that seek to capitalize on the benefits this hyper-connected concept can bring. At Optima the initiative goes by the name of TCAM: Total Care Asset Management. It consists of four interconnected modules, the first of which is the Total Care Asset Tool. This includes a 3D CAD model of the Optima equipment. The 3D viewer worn by the operator even includes a shopping cart function so that parts can be ordered quickly and simply. Meanwhile, Schubert Packaging Machines was presenting its new data box and possible applications of its GRIPS.world platform. A central component is a data box that analyzes important machine data. But rather than inundating users with so much Big Data that the data becomes overwhelming, the data box only delivers relevant information on various areas such as maintenance, control, and machine performance. Over the long term, through preventive maintenance and monitoring of machine functions, the data box allows overall system efficiency and production performance to be maintained at a high level throughout the entire lifecycle of the machine.

The remarkable functionality that servo motors bring to packaging machinery was on full display at interpack, and nowhere was it more forcefully demonstrated than at the Loesch Pack booth. On display was the RCB-HS, which wraps small chocolate products in a way that combines a hermetically sealed pack style with a traditional fold-wrap look. Olaf Piepenbrock, managing partner of parent company Piepenbrock, calls it “unique in this segment.” The magic behind the machine is in the control cabinet (photo shown here). That’s where 12 Lexium 62D servo drives and a PacDrive controller from Schneider Electric reside. Each of the 12 drives is a double-axis drive, so each one governs two servo motors out on the machine. The net result is a premium look and a hermetic seal at 600 bars/min.