The 3D gift box is inspired by medieval traveling theaters, as well as the much-loved pop-up books from the winemaker's youth.

Family-owned winery Chêne Bleu of Crestet, France, has created a special-edition 3D gift box inspired by the two famed medieval lovers—Abélard and Héloïse—after which their flagship wines are named. The French equivalent of Romeo and Juliet, Abélard and Héloïse’s remarkable true story in the 12th century epitomizes enduring love. The new, special-edition box opens to reveal their inspirational tale alongside exquisite illustrations.

One of the most famous couples in history, Abélard and Héloïse were scholars and philosophers, whose scandalous and lasting love affair has inspired centuries of poets, artists, and now winemakers. Chêne Bleu’s wines are produced at the La Verrière estate, located high up in a mountain saddle in the Dentelles de Montmirail range of the Mont Ventoux in Crestet, Provence. Xavier and Nicole Rolet and their family stewarded this small historic from an abandoned medieval estate and priory in the South of France to a state-of-the art winery.

“Wine is ‘Untouched by Light’”

“Flat Wine Bottle for E-Commerce is a Dow Diamond Finalist”

The limited-edition Chêne Bleu gift box can be personalized by inscribing a name on the a banner that hangs inside the box. The box was eight years in the making and was designed by packaging designer and engineer Claire Middleton in collaboration with Chêne Bleu’s principal Nicole Rolet. It is inspired by medieval traveling theaters, as well as the much-loved pop-up books from Rolet’s  youth. The box also contains a secret drawer that can be filled with a further keepsake or love letter, and can be lit from the interior by special request.

Every facet of the gift box is illustrated by woodcut artist Jane Randfield with whimsical medieval-meets-modern iconography. This is in keeping with the style of the ninth century priory at the heart of the wine estate and also with the edgy, maverick nature of the new winery growing on old roots. 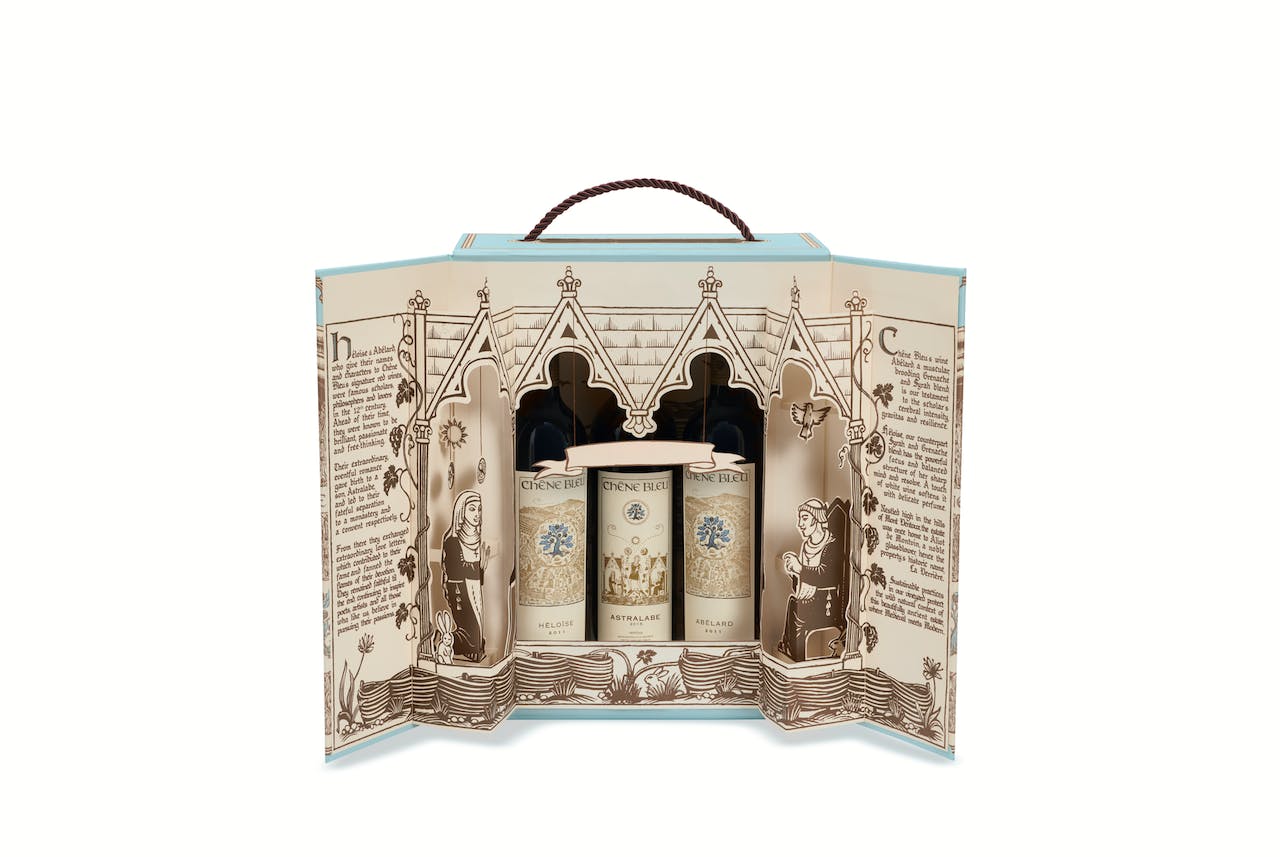 The limited-edition Chêne Bleu gift box can be personalized by inscribing a name on the a banner that hangs inside the box.The “chêne bleu” (blue oak tree) is illustrated on the front of the duck-egg blue box—at the estate, a blue oak presides regally over the vineyard, forest, and medieval priory. Its branches were treated with bouillie bordelaise, the blue-green solution used to protect organic vineyards during a drought in 2005. It stands as an artistic metaphor for the philosophy of the Rolets’ mission to highlight the integrity, beauty, and history of the site, enhancing and reinventing it without changing its essence.

Hidden rabbits on the box are a nod to the complex ecosystem that surrounds this remote, wild wine estate, and fantastical medieval-meets-modern characters adorn the package in reference to different aspects of the joys, journeys, and adventures that mark us and unite us as people.

Explains Rolet, “This gift box is very personal to me, as it seeks to illustrate some of the cornerstones of our family’s journey into the wild heart of winemaking. I wanted to showcase what is most important to us. The site has fantastical qualities that have the power to connect anyone who visits with greater truths about the meaning of life—a sense of place, a deep respect for the land and its history, but also the importance of making a commitment to never accepting the status quo, to push boundaries, to keep seeking improvement for the benefit of others.”