From overmolding to water testing in record time

Experience, creativity and cooperation were essential to developing the automated production process and machinery for a unique microbiological test vial that certifies water free of E. coli in hours instead of weeks. 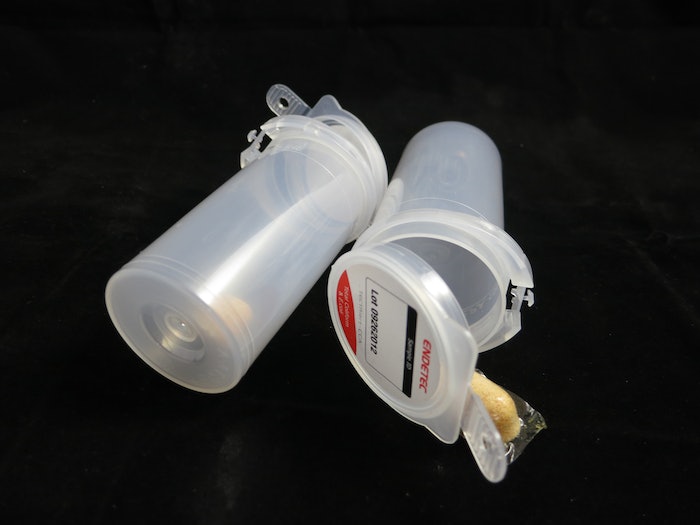 Verifying that drinking water is free of harmful E. coli and Total Coliform bacteria contamination is essential and often time-consuming. Typical water vial testing samples can take up to two weeks of processing to achieve a declaration of “clean water.” A new portable, single-use water test cartridge and automated test system from Endetec called Tecta reduces the process to 2 to 18 hours depending on the level of contamination. But Tecta might never have happened without three years of collaboration among three main entities: Endetec, its mold manufacturer and its injection-molding machine maker. Both the test vial and the process of producing it required extensive creativity and cooperation.

The Tecta system features an instrument with built-in incubation, a sophisticated optical system, integrated user interface with interpretive software, and a unique test cartridge. Key design specifications of the cartridge included a plastic vial with a living hinge and cap, coupled with an optically clear liquid silicone rubber (LSR) plug/nub at the bottom. The LSR nub holds a water-soluble patch of growth media and enables testing via the optical system.

Discussions between the three companies focused on determining what materials could be used for the product and what process would most efficiently produce it.  The materials had to be clear to see the fluid inside the cartridge and pass gamma sterilization processing. Also, there could be no inhibitors in the chosen plastic in order to get an optimal seal with the LSR. Lastly, the materials could not interfere with the microbiological growth that takes place during the test process.

Given these parameters, the plastic selected was a modified polypropylene and the LSR was an optically clear 1003-grade silicone. The materials were finalized by tweaking the thermoplastic process. The next vital decision in the early stages was whether to mold the materials separately and assemble them, or to overmold them.

“Roembke has been adapting and perfecting two-shot molding and overmolding in thermoplastic injection molding to produce finished products out of the press,” he says. “It’s one of the fastest growing sectors of LSR across multiple markets because it allows new formulas to bond to different substrates, such as silicone and plastic, most cost-effectively.”

The Tecta cartridge was particularly challenging because although LSR molds are heated to 320° to 400° F, the plastic has lower melting temperatures. Temperature also has direct impact on the cycle times, as well as the effectiveness of the seal between the plastic and LSR.

“We have developed a unique process for increasing the melting temperature of the plastic to prevent it from deforming as the LSR molds are heated,” says Roembke. "We're the only toolmaker in the U.S. that has completed a two-shot LSR project successfully.”

Roembke and Engel Machinery North America, York, Pa. worked together to develop the two-shot molding cell and LSR tooling prototypes. Testing of these prototypes was conducted at Roembke’s 3,600 sq. ft. application center, which has seven injection molding presses ranging from 35 tons to 200 tons. This allowed molds and production processes to be tested and validated on-site. On-site co-molding / injection molding machines were used to ensure the process worked before buying the actual co-molding press.

A series of prototype tools were modified for the plastic vial and LSR component to complete the two-shot mold/press process. One press was used to mold the plastic vials, which were then moved to the second press to apply the LSR tool. The primary machine used was Engel’s Victory 200H/80L/160 Combi. This is a 160-ton single-cavity machine equipped with two injection units, one for the thermoplastics and the other for LSR.

Endetec had determined that there could be no chemical bonding agent between materials, which was a reason for choosing the optical-grade LSR. But Roembke says that, during the prototyping, the team discovered that the bonding of the plastic to the mold steel distorted the product in certain areas. It also left a residue after extensive running, which didn’t allow the LSR to bond properly.

“These were the areas that required close communication with the materials people and the customer to correct this problem,” Roembke says.

Ultimately, the Roembke mold was a single drop cold deck with a standard LSR valve gate design featuring side injection (as opposed to back injection) for the plastic. “This addition helps maintain the ideal temperature to ensure an effective seal, all while maintaining an adequate cycle time,” says Roembke.

The final Engel machine was a standard two-component model that incorporated the smallest diameter screw possible (12 mm) on the injection units. Dedicated servo valves were used on both ejection units, with valve controls used for optimal speeds and pressures.

Once the prototyping was complete, Roembke built a one-cavity production mold for startup production, although the press and automation were all designed and built for a four-cavity mold. The initial prototype molds were built using two 55-ton Arburg presses: one to run the plastic mold and one to run the LSR mold.  “The machines were next to each other, and we personally transferred the plastic part to the LSR machine, acting as the robot,” says Roembke.

After prototyping, Pro Systems of Churubusco, Ind. developed a robot-transfer method. When the first injection mold opens, the robot transfers the molded plastic component to the LSR mold. Following the LSR injection, the unit is removed by the same robot and is staged in a turntable automation cell.

The six-axis robotic system also completes six processes outside of the molding area, including placement of the water-soluble pouch containing pre-measured amounts of growth media, and labeling.

The development of this production equipment not only resulted in an economical and automated microbiological testing system for E. coli, it proved that collaborative efforts between the moldmaker, the machine builder, the automation supplier and the customer could achieve what was once thought impossible. Ultimately, Endetec’s Tecta will improve public health and drinking water safety by providing earlier warnings in the case of a positive contamination event.

Which means it’s good that the production systems were designed for expansion. “The single cavity tool can be easily expanded to a four-cavity tool as sales ramp up to anticipated quadruple volume,” says Roembke.