“This is a moment where silos are being broken down, where those who make and those who package are talking together. It’s a great first step.” 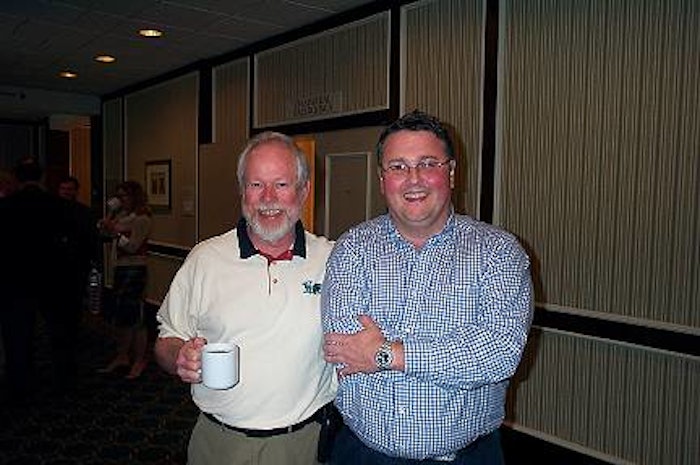 These were among the introductory comments delivered by David Chappell (shown on left), technology leader at Procter & Gamble, at the first working session held by the World Batch Forum and the OMAC Packaging Workgroup. The May 19 session, held immediately after the four-day WBF North American conference in Lincolnshire, IL, drew about 30 attendees representing both automation technology suppliers and end-users, including Procter & Gamble, SABMiller, Schering-Plough, Unilever, and Pfizer.

Participants at the session quickly reached consensus that it makes good sense to coordinate the development and implementation of the IEC/ISA S88 standard for batch control architecture with OMAC’s PackML state model. The WBF committee working on Part 5 of S88 seems especially well situated for engaging in joint activities with OMAC because Part 5 is focused on recipe/equipment interface. Consultant Lynn Craig of Manufacturing Automation Associates emphasized that the S88 Part 5 committee is just getting started, but basically their objective is to flesh out ways in which the handling of batch recipes and the handling of third-party equipment such as packaging machinery can share the same controls architecture. “The initial emphasis has been on reducing the pain as we try to integrate disparate equipment into a unified control system,” said Craig.

A key objective behind this first-time meeting of the two groups was to have each familiarize the other with what their work is all about. In describing OMAC to WBF members, Unilever’s Andy McDonald (shown on right) had this to say about OMAC’s orientation and objectives.

“OMAC is primarily end-user oriented, but we must link with suppliers, with the academic community, and with the [trade] press. We want to arrive at mutual business advantages for end users, OEMs, trade organizations, and technology providers. We’ve tried hard not to be geeks about discussing technology, which is an enabler, not a goal.”

Participants from both WBF and OMAC Packaging Workgroup agreed that when it came to setting common goals, they should aim high but take small steps. “Look at S88, for example,” said P&G’s Chappell. “We’ve been nibbling at pieces at a time.”

The ultimate goal for both groups, said Chappell, is to find meaningful ways of breaking down manufacturing silos wherever they impede efficiency and productivity.

“We don’t want separate companies inside the same plant,” said Chappell. “We want to pass data horizontally from CEO to continuous processing to batch processing to packaging.”

The meeting concluded with an agreement that phone connections and teleconferencing sessions between WBF and OMAC Packaging Workgroup should be used to explore areas of common activity. Also, two face-to-face gatherings are planned. The first will be June 30 at the conclusion of the Packaging Machinery Manufacturers Institute’s PackOps Conference at Chicago’s Westin O’Hare. (For more information, phone Matt Croson at PMMI, (703/243-8555.) The second is tentatively planned to coincide with PMMI’s Pack Expo International, scheduled November 7-11 at Chicago’s McCormick Place.