With help from Charlotte Warren from Equator Design’s Nottingham, England, studio, we examine how packaging designers can lead the change to save our oceans from plastics overuse. 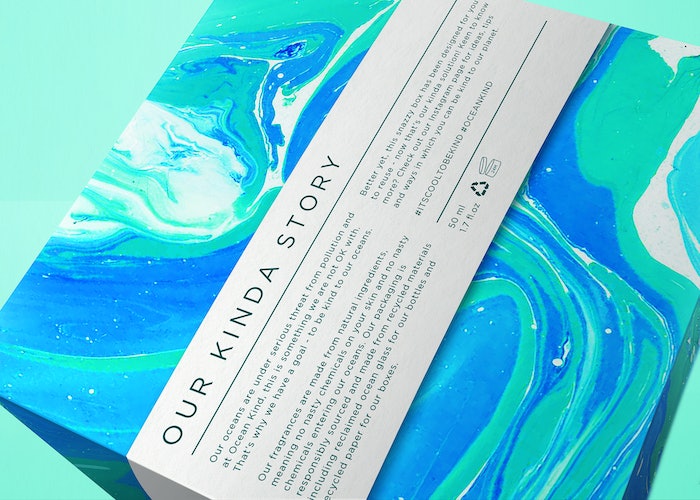 Packaging for suminagashi includes a story on the importance of buying eco-friendly products to reduce ocean pollution.

It was during a trip to Southeast Asia that Charlotte Warren gained a greater appreciation for the majestic beauty and power of the ocean. Later, when she learned of the scale of the damage being inflicted by human beings due to our addiction to plastics, that love developed into a fierce passion for sustainability.

“As a packaging designer, I began to feel a much larger responsibility for the damage being caused,” says Warren, who works at Equator Design’s Nottingham, England, office. At that point, she made a commitment to educate herself and others on the issue, while exploring potential solutions as part of her professional development.

Now is the time to explore alternatives to plastics

In Part 1, we discussed which materials are front-runners as a replacement for plastic as a packaging material. But why has this become such a large issue recently, with a surge in media and consumer attention? The culmination of years of momentum, including research by leading universities and commercial organizations, there is a growing voice lauding the benefits of using sustainable materials for businesses, shifting the focus away from the great expense that previously dominated the conversation.

Now, publications the likes of the Harvard Business Review herald sustainability as “a mother lode of organizational and technological innovations that yield both bottom-line and top-line returns.” It adds, “Becoming environment-friendly lowers costs because companies end up reducing the inputs they use.”

It is also emerging that eco-friendly packaging is:

According to Stanford University, 1 metric tonne of recycled plastic saves 5,774 kWh of energy, 16.3 barrels of oil, 98 million BTUs of energy, and 30 cubic yards of landfill space.

Meanwhile, in the public consciousness, television programs such as Blue Planet have brought vivid color and a compelling narrative to the devastation of marine habitats and coral reefs. The “Attenborough Effect” is in turn helping create a new and important variable in how brands promote themselves and position their products in crowded in-store and online marketplaces.

The momentum is building further as large-scale corporations adopt new sustainability targets and build them into their social responsibility agendas, and these are usually displayed on their websites for the reference of consumers.

Research has indicated that 73% of millennials are willing to spend more on sustainable goods, while 66% of general consumers would make the same choice. Similarly, 21% of respondents would “actively choose brands if they made their sustainability credentials clearer on their packaging and in their marketing,” while 78% of American consumers claim “they feel better when they buy products that are sustainably produced.”

McDonalds has committed to using completely renewable, recycled packaging by 2025. Deliveroo, an online food delivery service in the U.K., has been trialing an opt-in button for plastic cutlery as well as an e-bike scheme. U.K. supermarket chain Iceland has been leading the way on packaging change, vowing to use completely plastic-free packaging on private brand items by the end of 2023. Co-op, Waitrose, and Nestlé have made similar environmental commitments. And largely these have to do with packaging.

As we’ve always said at Equator, packaging is powerful. And since 80% of a product’s environmental impact is determined at the design stage and in production, concentrating on post-use recycling is not going to prove an effective long-term solution. Packaging affects the entire supply chain, including the material producer, the converter, the brand owner, the retailer, and finally the waste and recycling organizations. And then the cycle starts again with the material supplier.

Which brands are doing it right?

Through her research, Warren has compiled a list of brands that are making waves in the sustainability game. In addition to Kevin Murphy, which was featured in Part 1, she notes the following:

Where do we go from here?

Experts agree there are considerations that will give manufacturers pause when they seek to overhaul their supply chain. For example, some so-called sustainable and recyclable materials, such as biodegradable and bio-derived plastics, which packagers may look to as a means of transitioning away from fossil fuel-based plastics, are not in fact widely recycled, but instead collected as general waste. Other problems arise in the U.K. and other countries where waste collection and recycling is not coordinated centrally, but by local authorities, creating inconsistencies and hindering the closed-loop recycling of materials.

In answer to this problem, Unilever in Australia recently called for standardization of the waste management laws and regulations across three tiers of government, after it was concluded that differing recycling policies were slowing down progress in sustainability.

Using recycled and new materials is also, on average, more expensive than using virgin ones, as Dominic Cakebread, Director of Consulting for Packaging at Global Data, recently told Raconteur. He said, “Their cost is almost always higher because they don’t have the same scale of production, and additional research and development investment is needed to change the machinery line.”

The cost implications, he says, involve an initial investment; however when volumes increase, the original investment can be recovered.

Warren believes it’s key to consider the reusability and recyclability of a product and its packaging in the design phase. She advises to begin by designing products with recycling in mind and consider using upcycled or waste materials. Also, avoid using excess packaging and minimize empty space.

In terms of sustainable materials, Warren says to choose long-lasting materials that use lower amounts of energy to produce and wherever possible look for suppliers that use renewable energy. In your materials selection, avoid chemicals that may harm the environment, and where possible use natural inks and dyes. Also, use FSC-certified paper.

Warren used these points in a design project for a new fragrance called suminagashi. For this packaging, she selected a glass bottle, recycled and recyclable materials for the reusable outer box, and natural inks. To inform and educate buyers on the issues relating to ocean pollution, the packaging includes a story highlighting the importance of buying eco-friendly products.