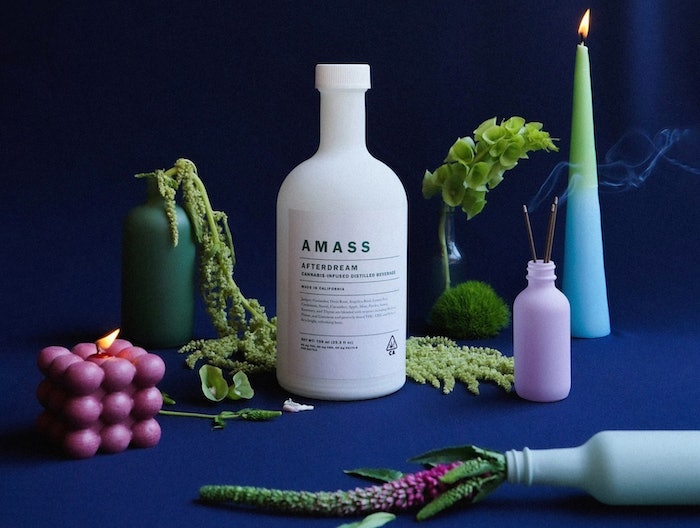 Spirits producer Amass has moved into cannabis with a THC- and CBD-infused non-alcoholic beverage.

Disruptions in supply chains, crop damage resulting from climate change, and a shift in consumer attitudes toward drinking are set to shape new trends and consumption habits in spirits and wine over the coming years, supporting steady growth. That’s according to GlobalData, which says it expects the market to increase at a CAGR of 1.2% by 2026.

Says Holly Inglis, Beverages Analyst at GlobalData, “Health consciousness and sustainability, sprinkled with a pinch of indulgence, are set to drive many innovations this year, as consumers look for products that align with their personal values without compromising on taste. In GlobalData’s Q2-21 consumer survey, 34% of global consumers stated they find sustainably/ethically sourced ingredients very appealing, highlighting an innovation opportunity for beverage producers.”

According to Inglis, five trends will shape the spirits and wine sector over 2021/2022.

1. Low/No ABV [alcohol by volume]: “Already established in the beer sector, low or no ABV are now taking shape in spirits and wine,” Inglis says. “Although hard seltzers benefited from this trend recently, Boston Beer reported that hard seltzer growth diminished, meaning the company had to revise its full-year growth forecasts—perhaps suggesting a slowdown in the previously booming category. That said, ‘moderation’ is still a winning trend, as consumers look for lower/no-ABV variations of their favorite drinks. Innovations witnessed so far in 2021 have included Street Hard Seltzer in Russia, Desperado’s virgin 0.0% mojito beer in France, and Svami Zero Proof non-alcoholic pink gin and tonic in India.”

2. CBD infusion: “Two companies have recently leveraged experimental and health trends in one unique launch. Spirits producer Amass has recently paired THC- and CBD-infused with zero-ABV spirit, highlighting a modern take on what was once considered a taboo,” Inglis shares. “In Poland, CBD beer launches from Browar Miejski Gloger Sp. Z o. O have also been witnessed, though in GlobalData’s Q2-21 consumer survey, only 15% of global consumers stated that novel/unusual flavors were opted for in alcoholic drinks, positioning this as more of an emerging trend.”

3. Better-for-you wine: “Consumers are increasingly demanding sustainable and healthier alternatives to traditional products, and often this is achieved via certifications such as organic,” Inglis says. “Regarding wine, this refers to organic, biodynamic, or sustainable, all of which have their own certification boards and regulations. GlobalData’s Q3-21 survey reveals that 55% and 40% of global consumers find natural and organic claims to be very appealing, respectively. In Chile, the Miguel Torres Las Mulas brand launched an organic sparkling wine, appealing to eco-conscious consumers, though launches of this nature also connote a premium.”

5. Portion-control cans: “The can format primarily came into play as part of the on-the-go trend. However, since the pandemic and subsequent slowdown of many people’s lives, canned wines and spirits have co-opted a different space—that of portion control. Cans provide an accessible and affordable way to both count calories and consumption of alcohol units,” Inglis says. “In GlobalData’s Q2-21 survey, 33% of global consumers stated that they are actively trying to reduce their consumption of calories, with a further 38% highlighting they are trying to reduce sugar consumption. This denotes not only a move away from high-ABV count, but other less-than-healthy ingredients too.”

It's unusual for PW to cover pre-commercialized projects. But at Smithers' Sustainability in Packaging US event today in Chicago, we saw a paper-based beverage cap application that's closer to in-market than we'd have thought.
Matt Reynolds
Mar 10th, 2022
More in Beverage

The U.K.’s ACTIPH Water brand differentiates itself among a sea of hydrating competitors with an electrolyte- and mineral-rich formula and ionization process. The tethered closure is robust for athletes, and meets upcoming regulations.
Matt Reynolds
Feb 28th, 2022

Cannabis Drinks Look for Their Place Among Users

Abuzz with excitement about the potential to transform the way that people are consuming cannabis, the drinks sector is appealing primarily to the high end of the market.
Aaron Hand
Feb 28th, 2022

Re:Water is First in the Market with a 100% PCR Aluminum Bottle

New U.K. brand Re:Water Spring Water comes in a refillable, recyclable aluminum bottle that is said to be the first in the market to use 100% PCR content.
Anne Marie Mohan
Feb 23rd, 2022

Believing that from grain to grass, there can be no conviviality in excess, the spirits giant commits to actions that move it toward a circular system for its packaging, with innovations around brands such as Absolut, Malibu, and Beefeater, among others.
Anne Marie Mohan
Feb 16th, 2022

The Coca-Cola Company today announced an industry-leading goal to significantly boost its use of reusable packaging.
Matt Reynolds
Feb 10th, 2022