Packaging professionals know this maxim: Perception is reality. Applied to the economy, the more relevant issue is not whether there’s a recession, but whether consumers believe there’s a recession. National polls indicate that they do; besides, the government’s economic stimulus package is indicative in and of itself.

A consumer packaged goods company that’s determined to thrive rather than just survive must assess opportunities inherent in a recession and exploit them. Successful, the company will emerge stronger in market share and brand strength. The person within the company who’s responsible for packaging should accept the challenge of demonstrating how the discipline is indispensable to those aims. A sluggish economy favors the opposite in actions.

It’s part of senior management’s DNA to think belt-tightening during downturns; therefore, the packaging manager must make the case for why the discipline should be spared cuts in personnel and resources. The best position is to be able to demonstrate that the company’s packaging already is lean and efficient and that further cuts would be into muscle. Short of that, it would behoove a packaging manager to present his own proposed measures, rather than simply accept those imposed.

In all instances, the pitch should be quantifiable, but, luckily, any well-run packaging department has had experience—especially recently—in communicating with numbers. That "recent" reference is for the quantifying of savings derived from sustainable packaging. Not that green is the only—or even main—contribution packaging makes to a company’s being in the black, for it has always had to provide function at the least systems cost.

The packaging manager’s case should be like an in-house Packaging Scorecard that addresses the company’s mission, objectives, and strategies. Packaging is often referred to as the silent salesman, but that’s not to say that the manager—in effect, the salesman for packaging—should be at all silent, when the discipline stands vulnerable to ill-advised cuts.

The packaging manager should aggressively advocate on behalf of projects that, in his opinion, can’t be scrapped or even tabled without impairing packaging's ability to contribute to brand strength and corporate competitiveness.

Senior management is not necessarily conversant with trends in packaging technology, machinery, materials, design, etc., nor the variety of ways they can be combined and interpreted for innovative and smart results. Hence, a senior manager might decide the fates of projects based on capital outlay, for example, favoring those deemed more affordable, when that subjective measure doesn’t provide the total picture.

Success in defending projects is based on numbers, but numbers that reflect the future. The characterization should be that of an investment, with the dividends quantified to the extent possible.

The packaging manager should look for ways to increase the incentive of the higher-ups. One possible opportunity afforded by depressed times is the willingness of suppliers involved in a project to make price concessions. They need not be major. Even a small concession sweetens a project originally attractive enough to have been approved without it.

Another possible win-win situation with suppliers involves a more favorable calendar. Clients who retrench in recessionary times allow a supplier to move clients of the opposite persuasion to the head of the line. Then, those latter clients can defend the project, not just on the basis that it's an investment, but additionally that it can be finished earlier, hence an earlier start of dividends.

How does a packaging manager know whether the aforementioned opportunities and others are available? He can’t know - at least not the full range - without ferreting them out. The manager has to take a proactive stance, initiate dialogue, and brainstorm possibilities. An added benefit: mutually beneficial relationships forged during difficult times tend to endure and only grow stronger.
Make the marketing alliance

Packaging won’t be the only discipline scrambling to hold its own; however, due to its inter-disciplinary nature, it’s well positioned to form strategic alliances, and the most important is with marketing. A recession is an apt time to inform and remind the company that packaging is a powerful marketing tool.

Maintaining (or increasing) marketing expenditures during a recession is not the whole of it; rather, the greater challenge is making sure that expenditures--of whatever levels--are best suited to opportunities presented by the circumstances. As for the possible contributions of packaging, it’s useful to frame them around its functions: protection, communication, and convenience or utility, as some prefer.

The specific reliance on each function depends on the marketing strategy, which then must reflect knowledge of how the target consumer has been changed by recessionary times:
* What’s the best way to emphasize protection so that it fosters a sense of security and motivates otherwise reluctant consumers to make the purchase?
* What’s the best way to communicate that the product is economical, while preserving the dignity of proud consumers?
* Likewise, what’s the best way to provide convenience that bespeaks value, but not penny-pinching?

The answers lend themselves to as much variety as there is across the categories of consumer packaged goods; still, certain possibilities are widely applicable. Larger, economy-size packages translates to fewer trips to the store, as do concentrated formulas in smaller packages. Typical promotional packages, such as greater quantity/same price and pack-ons, are nicely suited for recessionary duties, also.

The stratification of high-, middle-, and low-end product offerings, typical in most consumer packaged goods categories, adds another layer of complexity. A recession—contrary to what might seem intuitive—might steer some consumers to the high end (or a private brand), in substitute for pricier indulgences forsaken in other areas, for example. A surer prediction is that some consumers of more modest means will switch to the low end. Under either scenario, it’s likely to be at the expense of the middle ground.

High- and low-end products occupy their niches as the result of consistently targeted marketing, while the middle is the province of "me-too" entries, undifferentiated neither by product features nor by packaging. Nonetheless, during a recession, all three strata need reliable models of consumer behavior to guide marketing strategies and to interpret them through packaging.

Most consumer packaged goods are not supported by media advertising, relying on the package to serve that function in-store. A recession provides an added necessity for more effective coordination between these two marketing tools, whether the company is an old hand at media advertising or is venturing into it because it's become more affordable due to media concessions.

A television commercial should show the package at junctures, and for durations, that are purposeful; after all, one objective of the commercial is to give the viewer the knowledge of what to look for on the shelves. A radio ad should, if feasible, sign off with, “Look for ________in the _____ package in stores nationwide,” or something to that effect. A print ad should feature a package mock-up whereon brand name and product category are prominent, clean of secondary copy that usually doesn’t photograph legibly, anyway. The same goes for Internet ads.

Realize that change is constant

Recession and expansion: Both are types of change, differing in direction. Adaptability is the key to handling change, regardless of the times. Adaptability depends on flexibility and speed.

A recession, therefore, is a test of how flexible a company’s packaging operations are. With what ease and efficiency can the company react? How geared for quick changeover are the operations? How smoothly can special requirements be handled in-house without risking over-capacity or idleness later? In that same vein, how strategically are contract packagers utilized?

Speed-to-market is a competitive requirement. One manifestation is the parade of package design changes that some brand owners have launched. The recession will underscore further the value of speed; there will be instances of recessionary strategies undertaken too slowly to take advantage of the associated opportunities. Slow-footed companies also will be at a disadvantage during the recovery, lagging behind swifter competitors.

With so much national attention focused on the troubled economy, the packaging manager should turn an unblinking, analytical eye on how his discipline is structured—a necessary step in assuring that it stays in step with the times–or even better, ahead of the times. 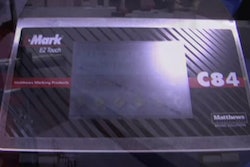 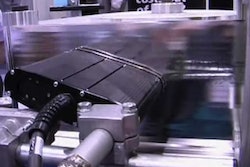 Small and large character ink-jet printer, perfect for in-line marking of 1 to 5 lines 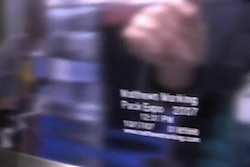 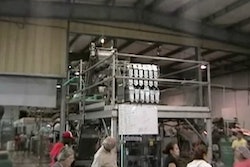