According to market research from MarketsandMarkets, the 3D printing market is expected to be worth $32.78 billion by 2023, which represents a Compound Annual Growth Rate of 25.76% between now and then.

Materials currently representing the largest share of this market are plastic and metal, though the market for other materials is expected to grow at the highest CAGR during the forecast period. This will be driven, says the research, by increasing demand for biomaterials used in the healthcare vertical and certain specialized materials—wood, wax, paper—in emerging applications.

As for which vertical markets are expected to lead during the forecast period, aerospace and defense will continue to hold great potential. But they’ll be joined by “emerging verticals” such as food, printed electronics, education, and energy.

“Packaging machines require relatively high customizations due to the large variety of products that are packaged,” says Nadav Sella, head of Stratasys’s Emerging Solutions business unit. “In many cases, the use of 3D printing can not only save time and cost in the manufacturing process of those machines but can also make them more efficient by reducing weight, simplifying design, and increasing functionality.”

Sella points to recent work done by 3D print expert Visual First for The Chocolate Factory, a Dutch confectionery manufacturer, as a good example of opportunities for 3D printing that exist in the packaging machinery sector. The Chocolate Factory wraps a lot of chocolate bars on one particular piece of equipment whose operation hinges on a hook-shaped metal part that lifts wrapped bars and moves them onto a conveyor belt. This component is prone to becoming stuck, which causes it to buckle. Consequently, it needs to be replaced on a regular basis. Visual First decided to look into the possibility of printing this component to save time and money.

Early tests produced parts that didn’t exhibit enough rigidity. But then Visual First came in contact with Stratasys and that firm’s new Nylon 12CF material, a thermoplastic filled with carbon fibers. When Stratasys printed one of the hook-shaped metal parts using this material and it was tested at The Chocolate Factory, it quickly became apparent that this was the solution for at least two reasons. First, it brings a 60% cost savings. Second, the part can either be printed in volume and kept in inventory without requiring huge amounts of capital, or it can be ordered on demand and delivered quickly. That lead time could, of course, be reduced even further, down to as little as a few hours, if The Chocolate Factory installed its own 3D printer on site.

Its experience with The Chocolate Factory has Stratasys keenly interested in 3D-printed parts for industrial machinery in general and for packaging machines in particular. According to Sella, Stratasys is also collaborating with Danish global transport and logistics provider DSV on that firm’s 3D Printing Exploration Lab. “Like its competitors,” says Sella, “DSV understands the disruption that 3D printing could bring to the supply chain. Think about it. If you are a Consumer Packaged Goods Company with a global footprint and you already have DSV routinely providing you with a wide variety of goods and services all over the world, why not have DSV print and deliver the spare parts you need for your machinery?” 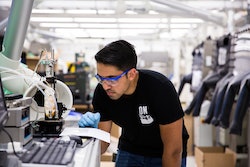 Dose printing shows promise at the University of Michigan 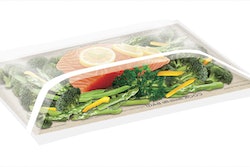 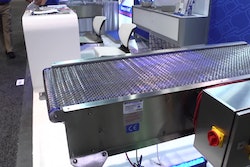