In the continuing saga of the development of government policies about nanotechonolgy, the biggest recent news comes out of Europe.

In the continuing saga of the development of government policies about nanotechonolgy, the biggest recent news comes out of Europe. The European food safety body announced a definition of “nanomaterials” that has caused the latest buzz.

Packaging applications have been early targets for nanomaterials, which can also be used to make foods, drugs, inks and other commercial products. When you intentionally make particles very small, they can perform differently than the same substance in traditional-sized particles. All masses being equal, there is more surface area on the nano particle than on the larger particle, which can affect chemical and physical properties.

Scientists are not yet able to say in advance which nano-versions of traditional chemicals will be more safe, less safe, or behave differently. For that reason, government regulators charged with protecting public safety have been puzzling over how to address nanotechnology.

So now, the European Food Safety Authority (EFSA) has defined nanomaterials as a “natural, incidental or manufactured material containing particles, in an unbound state or as an aggregate or as an agglomerate and where, for 50% or more of the particles in the number size distribution, one or more external dimensions is in the size range 1 nm-100 nm.”

This definition is part of EFSA’s development of procedures for obtaining approval for use of nanomaterials in food contact applications. European authorities have already said that clearance of nanomaterials will require extra data about whether they are persistent when ingested and about the substance’s toxicology if they might be persistent.

Note that it is, to use the technical term, a very big deal that the European definition encompasses both intentionally manufactured materials and naturally occurring materials that are nanoscale. After all, it can reasonably be argued that, if any nanomaterials should be singled out for any special scrutiny or testing, it should only be only the intentionally engineered ones. We have all been exposed to a number of natural nanos for a long time, without evident mishap. (The Food and Drug Administration has thus far said it will focus on intentionally made nanos.)

As nanomaterials have emerged in various technologies, including food contact materials, the question of how to define them has been addressed but not yet fully answered in all nations. Specifically, it was recognized long ago that if new restrictive public policies and safety requirements were going to apply to nanomaterials, it might make more sense to impose them only on intentionally engineered nanomaterials and not on naturally occurring nanomaterials.

For comparison, back earlier this year, when the FDA came out with a draft guidance document on its approach to nanoscale materials, there was no definition of nanomaterials. The FDA said the agency will examine whether a substance has at least one dimension that is 1-100 nm, or whether the substance otherwise exhibited properties related to its dimensions, even though its dimensions are bigger than 100 nm and might range up to 1,000 nm. But FDA hasn’t pinned itself to any strict definition.

FDA has said that while it wants industry to consider the implications for safety and other factors in FDA-regulated products of the inclusion of nanomaterials, the agency will take a case-by-case approach to such materials for now.

As for that new European definition, one longtime observer of nanotechnology in food contact materials, Nick Kernoghan, a director at PIRA International, Ltd., offers some thoughts. Kernoghan emphasizes that the European Union’s final EFSA definition encompasses “natural, incidental or manufactured” materials and has that flexible approach to judging particle size.

The draft definition from 2009 had included substances containing 1% or more of particles in the 1 to 100 nanometer range, but the final definition changed that to 50%. Kernoghan says this part of the definition “is the most significant change because raising the limit to 50% of the number size distribution will significantly reduce the number of unintentional ENMs [Engineered nanomaterials]” that fall within the definition.

The definition’s recognition of aggregates and agglomerates holds the promise to exclude some substances from the definition, since it places the emphasis on the actual size of the particles rather than the nanoparticles that make them up, he says.

Kernoghan considers it a negative, however, that both engineered and natural nanomaterials are encompassed in the definition. He notes that in another regulatory pathway underway in Europe, namely the EFSA draft scientific opinion on risk assessment of nanomaterials in food contact materials and elsewhere, regulators are evaluating food contact articles containing nanomaterials and only including intentionally produced nanomaterials, “not natural or accidental ones.”

“Most significantly for food contact, it draws an important distinction between persistent nanoforms that are ingested and ones that are not persistent because they are dissolved or otherwise degraded before being ingested.” The Europeans appear to be adding another important consideration to questions of safety evaluation. However, he notes that persistent nanoforms are the ones that require additional toxicological evaluation whilst non-persistent ones do not, “which sensibly puts the extra effort and cost in the right place”.

We can hope that distinctions like that will emerge as the scientific evaluation of nanomaterials becomes more sophisticated, with the result that burdensome new regulatory evaluations will not be placed onto products that don’t warrant them. 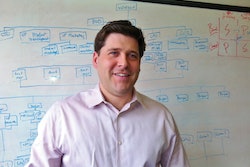 Turning the 'Channel' on counterfeiters 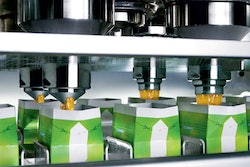 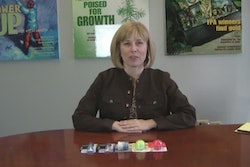 OFF THE SHELF: Lip balm packaging has really changed