Medterra has only been in business for four years, but this brand has been leading CBD sales in U.S. grocery for over 16 months and is expanding rapidly.

Jay Hartenbach has learned a few things about selling to retail since he left his job at IBM in 2017 and partnered with college friend J.P. Larsen to start CBD company Medterra. At the Natural Products Expo West conference, Hartenbach said he understood the technical side of CBD with his background in biomedical engineering and master’s in engineering management, and he understood e-commerce and direct-to-consumer marketing as he’d launched an online skincare company in grad-school. But selling to retail – including packaging requirements such as UPC codes, was a learning curve. 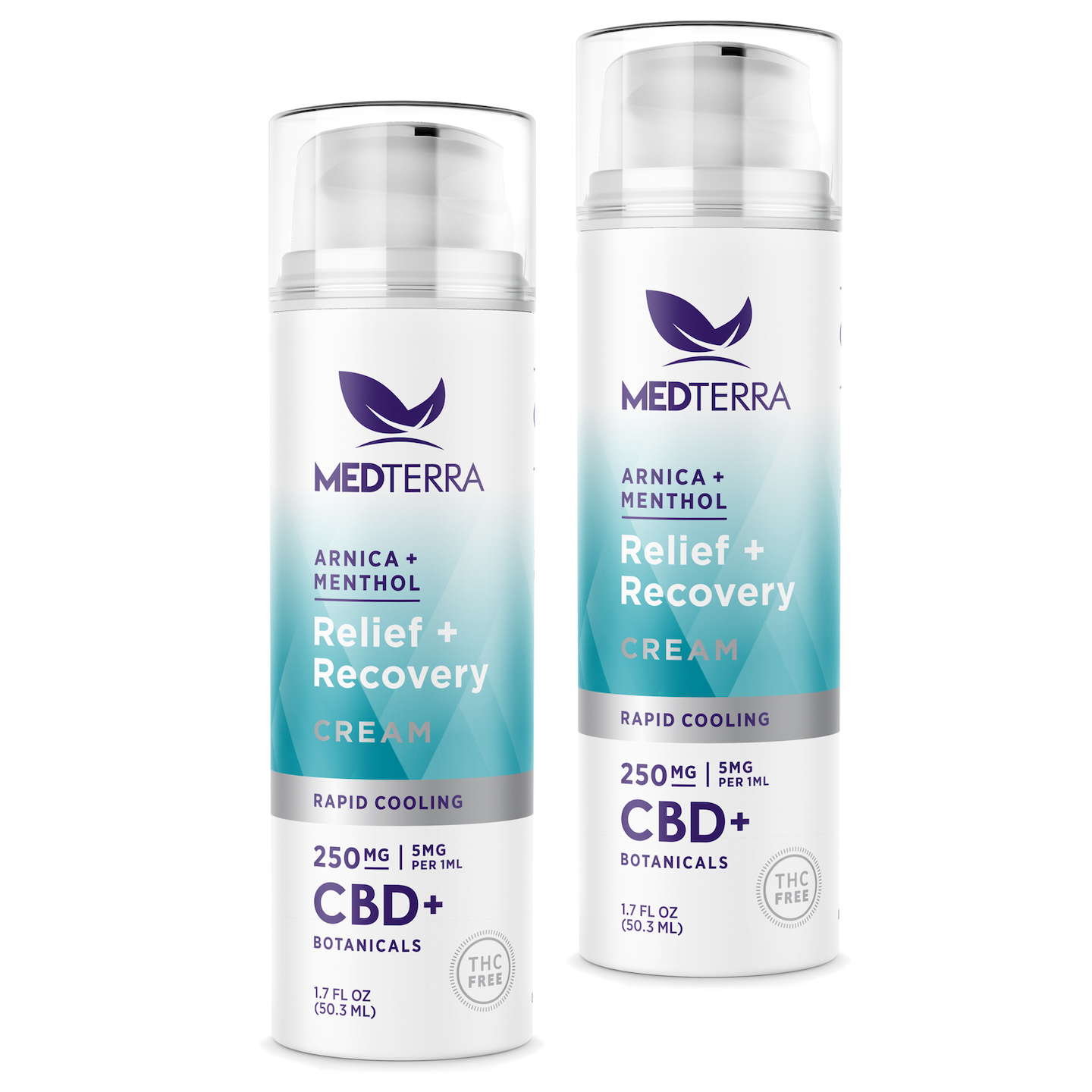 In the beginning, the pair was just trying to supply high-quality, verified CBD to other brands. “But shortly thereafter,” said Hartenbach, “we started looking at what people were doing with the CBD products that we were ultimately supplying CBD for, and we thought that people were charging too much money, and the consumer experience was miserable.” Dark packaging, no THC-free alternatives, and low potency, were other issues that Hartenbach saw with the offerings on the market, and he said they realized there was an opportunity to create their own CBD products.

Hartenbach said that he knew there are minimum thresholds for CBD to be effective, so the goal was to bundle a better customer experience, a more affordable product, and one that ultimately works better. Medterra was launched online, and within six weeks it had sold in all 50 states.

The retail sales component, however, was a “curve ball,” according to Hartenbach. “Our first product that we sold did not even have a UPC on it…and when we tried to sell it into wholesale, we thought a 20% discount off MSRP was going to be perfect, and we were kindly educated that that was not how you sell into wholesale.”

Hartenbach brought CRO Natasha Cuda into the company to grow the retail side. Said Cuda, “We had differentiation points from the very beginning. And that was what really led to our successes. I think number one was a lot of the other CBD brands in the space really weren't looking at retail quite yet.” One example of this differentiation, said Cuda, is when the brand started in the CBD space with two, 3.4-ounce topical creams, and had been accepted into CVS and Walgreens. At “the very last minute,” the retail stores requested a change to the price points on those products, and within four weeks, Medterra “created two new SKUs at the correct price point and the correct size to be able to really work with that CVS and Walgreens consumer, who was used to a typical price point coming into their stores. That SKU,” said Cuda, “is now the number one CBD cream in America. So, I think that's the beauty and the benefit of being with a startup company - we have that nimbleness, we have that flexibility, to be able to do what works best for you and what works best for the entire category.” 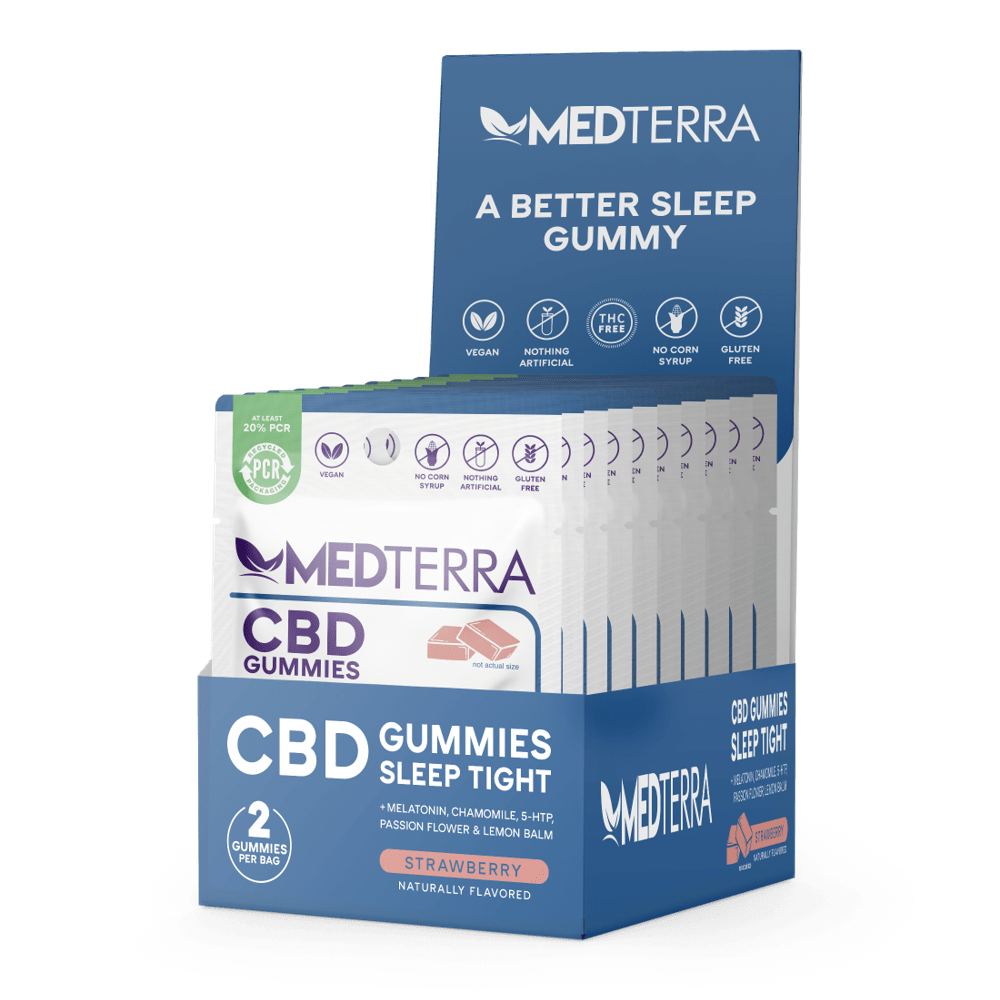 When the company was supplying CBD to other retailers in the early days, compliance was very important, said Hartenbach, “because we had to make sure that we could stand behind the product.” Careful sourcing of where the CBD came from is an approach the brand took with all the ingredients that were included in the products, but one problem with the industry at the time was that there wasn't a uniform standard. The U.S. Hemp Authority - a group of over 30 independent CBD manufacturers and retailers – was created to determine what the set standard could be. Hartenbach said there was quality testing to make sure companies were making appropriate marketing claims and putting the same amount of CBD in the product that was stated on the label. “And so,” he said, “because we were born in that world of having strict compliance as a wholesaler, that really was our differentiation.”

He said it’s important to recognize “if we do it in a correct manner, thinking about what we can make this industry, then CBD has got a lot more longevity. This isn't a fad; this is a product that's really helping people, so we've got to be good stewards of the industry.” And, he added, “the net of it is a CBD industry that the FDA can be more comfortable with, that consumers can be more comfortable with which I think is ultimately what we're trying to achieve. I think there's a misconception with CBD that we don't want regulation, that this is a cowboy industry. The leading CBD brands are demanding it. We are reaching out to the FDA saying, ‘you have to put these regulations in place because we're going to hold ourselves to the product quality that we just talked about, the marketing claims that we just talked about’ - because if you're doing it the right way, that's good for business and it's ultimately good for the consumer.”

“When we started in 2017,” said Hartenbach, “there was a fair amount of research internationally that supports CBD being used for a variety of conditions, but it was pretty sparse, and when Medterra got to the size and scale that we were able to afford our own testing, we established a partnership with the Baylor College of Medicine to do our own internal testing.”

Medterra is currently creating safety data, based on a suggestion by the FDA, and they send out monthly legal newsletters to all of their retailers, providing updates state-by-state, as well as sharing other studies that they’re participating in.

Hartenbach said there's been difficulty in the marketplace sharing consumer education because of the fine line between consumer education and what the FDA or legal departments will call a ‘claim.’  “We have to be very cautious of what we say on shelf and our packaging. In fact, one of the key things we've just started rolling out is QR codes. They have always been on our package, but now we're really trying to elevate the on-shelf experience by adding QR codes, and also guiding dosage on trays that are going into retail, as well as signage,” he said. 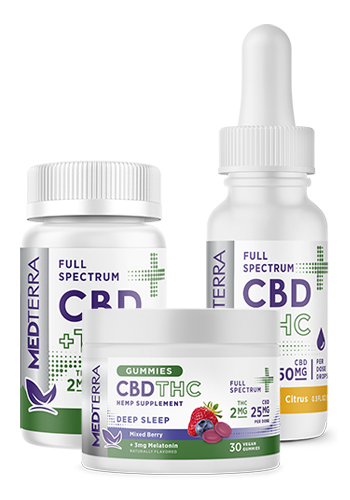 Full Spectrum ProductsMedterraMedterra launched 45 products in 2020. Said Velasquez, “The pandemic did not slow us down. We worked with our medical advisory board - we have five doctors that we work with developing products. We really develop a goal for the product: What problem are we trying to solve for the consumer? Then we work with the doctors, and we work with consumers, to test the products. We have a very robust quality process in place. Then we do some online consumer testing; we have different portals that we use for both quantified and qualified consumer discussions. We have, I would say, an innovation engine. In fact, I think Jay has put the brakes on for 2021. It's probably coming more from Natasha who's saying, "Can I have a moment to sell these 45 products before you keep bringing new products to shelf."

Medterra expanded its own brand with the addition of a full spectrum product line. (CBD 101: As Velasquez explained, “There's a hemp extract. You can extract the CBD and that would be called CBD isolate, at which point there's very low risk, if any, of there being any THC because you're separating out the CBD from the extract. Then you can create what we call a ‘broad spectrum’ where you're pulling out THC and only leaving CBD and the other minor cannabinoids; the CBNs, the CBVs, the CBAs, the CBGs, and these are becoming very interesting and exciting components of the hemp world. A full spectrum product has CBD, it should have a meaningful level of minor cannabinoids, but then also some THC.”)

Added Velasquez, “We have products that are isolate, we have a broad-spectrum line, and now we have this exciting full spectrum line. And we took it upon ourselves - because there is no FDA guidance over what those terms actually need to mean and what your formulation has to be in order to call it that. We really took a hard line and we said, "Look, we are not going to have a CBD product that has a fairy dusting of other minors in it and then some THC so that we can claim that. We are going to hold ourselves to a formulation requirement that we will have one to every five parts of CBD." 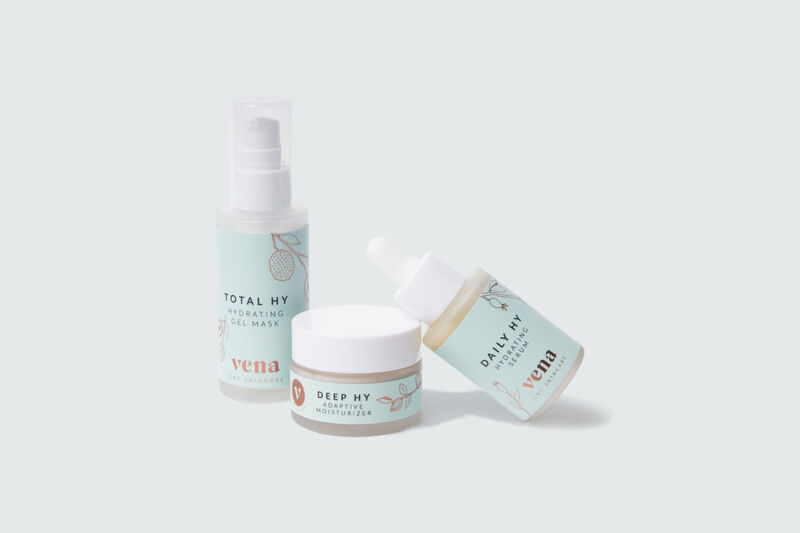 Medterra is also acting as an incubator for smaller brands with promise. There are currently two brands the company is working with: five CBD full spectrum line, and Vena, which is focused on the women's journey in CBD and is currently launching a skincare line.

Said Velasquez, “We know that different brands speak to different people and have different brand identities and different brand focuses. And just because you're a health and wellness consumer doesn't mean that you're only one type of consumer. So, we really look to partner with brands who are addressing different consumer segments in the market. There are consumers who are using CBD for aging, joints and muscles, and for their physical ills because they're maybe older, or they've played a lot of competitive sports, or whatever is going on with them physically. That consumer base has a different messaging and a different voice than the 20 years old’s who are worried about finals and wanting to take CBD to help them with their stress levels. So, we have brands that we think complement one another, but also don't compete with one another in terms of which consumers they're speaking to.”