Cloud computing -- it's quite a view

An ERP solution delivered over the Internet brings this aseptic juice manufacturer real-time visibility into processing, packaging, and the entire supply chain. 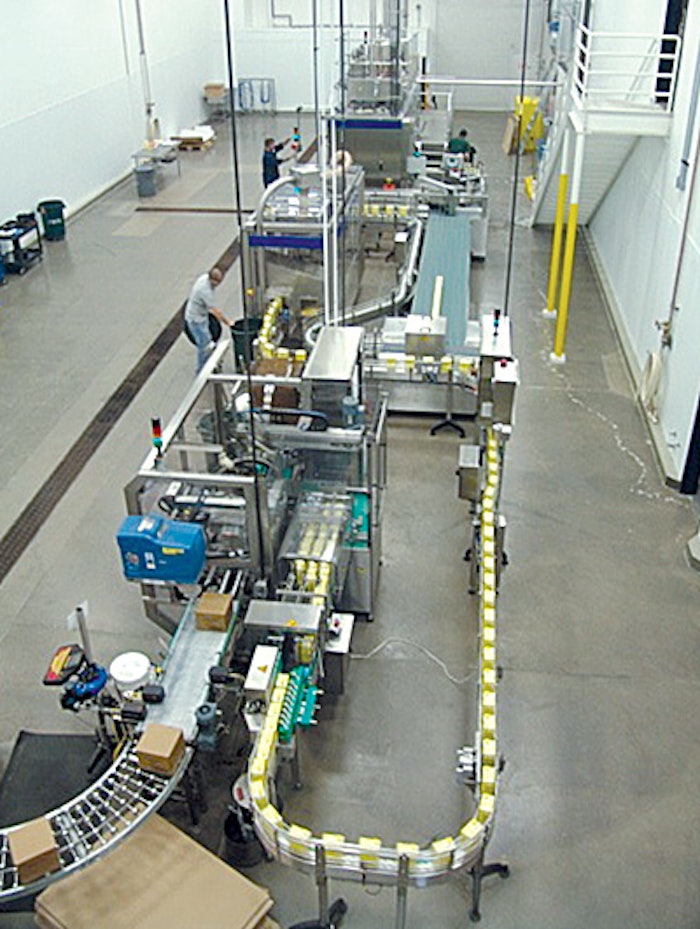 After the aseptic cartons emerge from the filling machine, they are collated and then sent through a case packaging system.

“Our strategy is to build a group of plants and integrate them together in a national footprint. The technologies we deploy are what will help us support that integration process.”

That’s how Dean McKay describes the philosophy behind a Minden, NV-based company called Q4 Integral Group. It processes and packages aseptic juice products in brick-style cartons sold under the brand names of Starbucks, Alaskan Airlines, and others. I haven’t met McKay yet, but his emphasis on the notion of integration is so relentless that when I do meet him in May, I expect him to be wearing a T-shirt with a neon blinking “I” splashed across the front.

The group of plants McKay refers to don’t exist yet, but Minden, NV-based Q4 is off to a great start with its first line. Operating commercially since April 2009, it consists of:

More intriguing than the hardware on the plant floor is the software that integrates it all together in one harmonious process-to-package whole. When McKay left the aerospace business he’d been in for many years and started researching aseptic processing and packaging systems, he assumed that the companies making the filling equipment would routinely provide the software that integrated their machines with the upstream processing equipment. That way, if a condition arose on one side of manufacturing that required the other side to modify its operation, this requirement would be communicated automatically. What he found instead is that the builders of the filling systems more or less assumed that things like temperature, flow, and pressure of liquid product exiting the processor would always be constant and optimized. Unfortunately, such constancy is never encountered in the real world. So in effect, McKay was entering a manufacturing sector where processing and packaging were not as integrated as he wanted.

But at Q4 they are integrated, thanks to an Enterprise Resource Planning system (ERP) from Plex Systems. It’s delivered over the Internet in a format known as Software as a Service, or SaaS. McKay thinks SaaS (which is sometimes referred to as “cloud computing”) has some distinct advantages over ERP products packaged in more traditional software formats.

“One big advantage is cost,” says McKay. “We looked at more traditional ERP software solutions and, in our case at least, they would have been astronomically more expensive to implement.”

The software doesn’t even reside anywhere at Q4. It’s accessed over the Internet for a monthly subscription fee. The fee is based on the size of the company. This gives it inherent advantages where scalability is concerned, says McKay.

“If you want to scale up by adding another plant, you don’t buy another expensive software suite,” says McKay. “You do pay a higher monthly subscription fee, but it’s still far less than a software suite.”

McKay values the extent to which the Plex Systems ERP solution treats processing and packaging as a continuous whole. He also credits IDD Process & Packaging Inc. with understanding the importance of that kind of integrated synchronization.

“Too many of the vendors we talked with weren’t willing to listen to what we wanted,” says McKay. “And what we wanted was to have the processing subsystems tightly integrated with the same information system that the packaging subsystems are tied into. We needed to have the PLCs throughout all of manufacturing communicating along the same network. Remember, downstream from the pasteurizer is a filler that wants product at a certain pressure and flow rate if it’s going to operate optimally. If processing and packaging aren’t communicating, if neither is capable of knowing in real time the status of the other, you wind up with pauses in production. And when you’re dealing with aseptics, pauses in production lead to either bad or rejected product. IDD did a good job of putting all of that together for us and then connecting it all to a central PLC that is the gateway to the Plex Systems software. We had the whole thing, processing to packaging, integrated in a few days.”

It helped, says McKay, that IDD already had considerable experience with processing systems that rely on a Rockwell  PLC, the PLC that governs Q4’s processing systems. “IDD had a lot of the algorithms worked out to control valves and pressures, and to keep flow of product through the processor synchronized with the needs of the downstream filler,” says McKay. “Plex Systems, on the other hand, already had the drivers developed for both Rockwell and Siemens PLCs, and it’s a Siemens PLC that’s on the Combibloc filler. Because Plex Systems already had developed an interface to both Rockwell and Siemens PLCs, they were uniquely suitable for extracting data out of both our processing and our packaging systems.”

According to Plex Systems’ Percy Gendreau, the comprehensiveness of this SaaS solution is perhaps its most distinguishing characteristic.

“We go right to the shop floor and talk to bar code machinery and do Quality Control checks, for example,” says Gendreau. “And all that functionality resides within the software. There’s no need to deal with a third party. It’s truly top floor to shop floor. We take orders, plan materials, schedule production, ship product out the door, and manage finances. There’s a CRM or Customer Relations Management component, too, as well as Quality Control, where we make certain quality checks throughout the process as the customer dictates. All of this is reinforced via the software. That’s not typically inherent in many ERP systems. Nor is the generation and tracking of unique bar codes that go on cases and pallets. Usually that requires add-on software."

Q4’s bar coding strategy provides a uniquely powerful track-and-trace capability. And again, because the firm is as dedicated to integration as it is, the bar coding doesn’t just begin at the packaging stage. Incoming raw materials are given a unique identification bar code. Take a box of sugar or a bulk container of juice concentrate, for example. In the case of sugar, every time sugar from that box is used, its use is entered into the system by a scan of the bar code. Any finished product out in the marketplace that has that sugar in it can be traced back to that box immediately.

McKay acknowledges that even without the Plex Systems software in place, the packaging machinery is reasonably well integrated. The filler, capper, and case packer each has its own PLC, and these PLCs exchange information among themselves reasonably well. But in his view, it’s not enough.

“Suppose that somehow the pH in the product is off,” he says. “The ladder logic programming in the Combi system won’t pick that up. In our case, we had IDD put pH sensors in the product flow and connect the sensors to the Plex system. The filler is connected to that same system, so if pH is off, that information doesn’t have to be detected in a QC lab hours after the fact before someone takes action. The filler is integrated with the processor, so the filler stops when there’s a problem with pH without even waiting for operator intervention.”

The four key processing parameters on which Q4 focuses the most are product temperature, pressure, pH, and flow rate. “If one of these gets out of whack and you’re managing them manually, it could be hours before anyone knows,” says McKay. “In the meantime, at 6,000 packages a minute, you’re putting a lot of bad product into the warehouse.” The odds of this happening are rare at Q4 because the filler is integrated with the upstream processor.

To no one’s surprise, the leading manufacturers of juice processing and packaging equipment are paying close attention to what Q4 is up to. “They have some very bright people, but when we describe to them the level of integration that we want implemented, they’re intrigued,” says McKay. “Because our view of integration isn’t just three or four PLCs connected in some kind of handshake arrangement. When we say integration we mean multiple plants all producing product to precisely the same spec. We mean real-time quality that rules out the possibility of the processing equipment sending out-of-spec product to the packaging equipment because the two systems are sharing so much information over the same integratged network that such a thing just can’t happen.

“If you’re from the fluid dynamics business you might think that level of integration is pretty simple. But in the food processing and packaging arena, as far as we have seen, we’re finding it to be pretty sophisticated.”