One of the great things about getting old is, as the old joke says, you’re still on the sunshine side of the grass.

Somehow, as we get older, some of us tend to place greater value on history, since individually, we have so much more of it than younger people. And that includes, at least in my case, a greater appreciation for antiques—especially for the craftsmanship that was employed in creating a hand-built piece of furniture or a hand-painted vase, a hand-made quilt, or the artistry displayed in a leaded-glass window.

One of the best experiences since we relocated to Northeastern Wisconsin was to see what a furniture restorer achieved with an old heavily painted mahogany chest found at a garage sale in Illinois, and now a prominent part of our bedroom. Of course, that’s only one side of the ledger, and there are entries on the other side that I’d rather forget. And don’t ask me about the dining room table on which at least one emergency appendectomy has been performed!

Nonetheless, I’m struck by an irony regarding packaging bar codes. As recently as two months ago, the cashier at a local store couldn’t get a bar code on a package to properly scan, so she had to enter the code by hand to get the proper price. Let’s be fair: it doesn’t happen often these days, and usually just a “hand-ironing” of a flexible package helps the scanner to read the code. But those of us who recall the early days of bar codes and scanners remember how often nonscans occurred then.

Well, now we have the Baldino factor. If you follow the news, a young man by that name stands accused of defrauding Target stores in Colorado by covering the bar code on a package for a personal electronics product with one he had made for a far-less-costly product. He was able to purchase a $150 product for $4.49, and another product that retailed for $249.99, using a code for a CD player that cost $24.99.

Now we have all kinds of scams at retailers these days. In our town, for example, we had a cashier working with friends who would scan a code for a package of bubble gum instead of the code for a CD that might cost several times more. And we all know about ‘backroom shrink,’ where employees remove products that have never been paid for by using the employee-only doors.

In the case of Baldino, however, we have a young man who learned of the scam from a friend. In the process, he downloaded a program from the Internet that allowed him to create a bar code onto a label that he could use to cover the existing bar code on the package. Although he says he didn’t have an accomplice at Target, he claims he looked for cashiers who might not know much about the electronic products so they wouldn’t recognize the switch.

In the overall scheme of things, this is small potatoes, except maybe for Baldino’s personal reputation. And you have to wonder how many others may be perpetrating the same scam using the tools suggested by the friend. Now, Baldino apparently tried just twice and was caught the second time.

As for me, I have to wonder how soon it will be before the bar codes become denizens of the antique stores I often wander through. I recall with particular poignancy my late father’s Weber grill that my sister and I had given him many years earlier. When we went to dispose of his possessions, I discovered that Weber grill was made before Weber used zip codes on its products. We were able to give it to a friend who personally had made Weber kettle castings in Manitowoc in the past. That seemed appropriate, and it made us feel good. And I’m happy to report the grill is still in use.

If trafficking in illegal bar-code markings has become commonplace, then it’s obvious we’re ready for a leap in technology, whether it’s to two-dimensional bar codes or to radio-frequency identification or some other more sophisticated identifier.

Are bar codes ready for the antique shop? Maybe not quite. But if this exposition proves anything, it’s the vulnerability of the existing technology and the importance of developing a new unique marker that won’t be so easily copied. 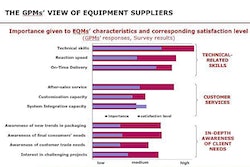 The relationship between buyers and builders of packaging machinery 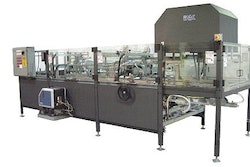 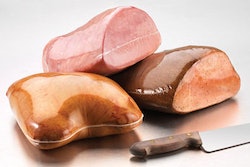 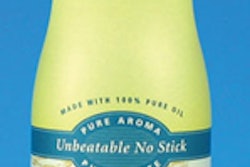