Allen & Cowley redesigns its cookie trays to cut down on size without reducing the number of cookies per tray. 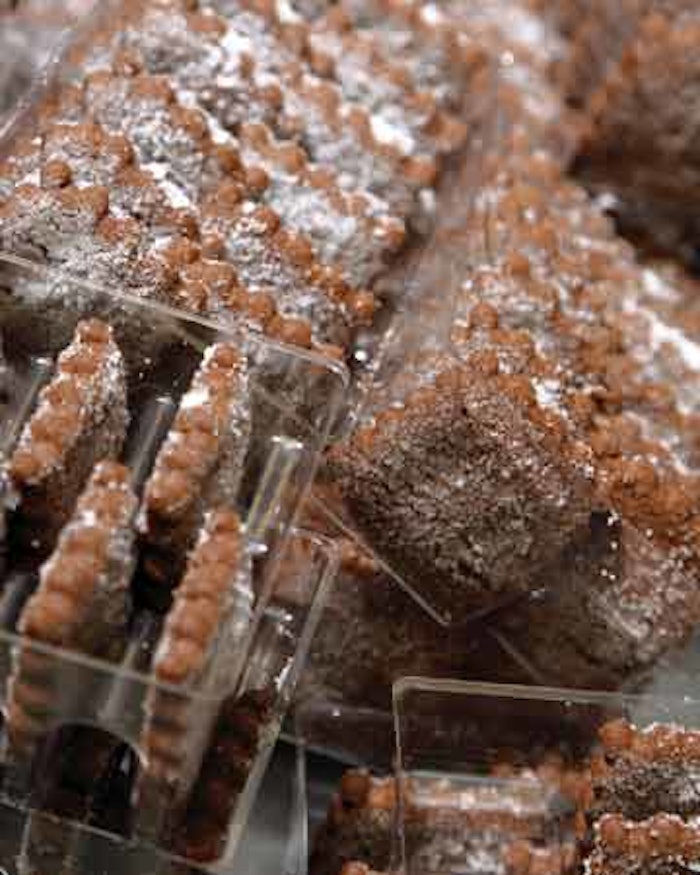 Allen & Cowley's Starr Ridge shortbread cookies debuted in February '05 in a tray thermoformed of polyvinyl chloride. But customers commented that the tray was out of proportion, that its size made them expect more product than its package actually contained. So the Phoenix-based firm contacted Flexpak (www.flexpakcorp.com), the designer of the original tray, and Flexpak promptly responded with a new tray design.

The dimensions of the original container were 5”W x 7”H x 2”D. “I just showed Flexpak the size I wanted, which was one inch smaller in width,” says Lee Allen, co-owner of Allen & Cowley. “We initiated this dialogue with Flexpak in September, and they got back to us quickly with four concepts. Within about two weeks they presented us with a mock-up in need of only slight alterations that fit the cookies.”

In applying 3D solid modeling parametric design processes, which Flexpak calls Pro/Engineering™, Flexpak developed an innovative design using traditional thermoforming technologies. The redesigned tray ingeniously staggers the cookies one next to the other without touching. A supporting rib structure maintains the individual spacing and is designed to fit Allen's box specifications. For the original tray, Flexpak had designed a two-column configuration, six cookies on each side.

“Our mission was to redesign a tray with the same cookie count, but in a smaller container,” says Ed Berger, vice president for business development at Flexpak. “Yet we needed to maintain ample spacing to minimize sugar crystals from coming off the cookie, ultimately providing the customer with a quality product.”

Pentafood fit for the job

The design created by Flexpak went from the drawing board to the production floor with help from Klöckner Pentaplast (www.kpfilms.com).

Says Berger, “They have provided quality products, they met our required lead-times, and the quality of their films allows us to operate our machines at optimum efficiency.”

Flexpak chose Pentafood® FD-M180/14 vinyl film for the job, using the same thermoforming system responsible for the original tray, a Model 2500 from Sencorp (www.sencorp-inc.com). It is outfitted with custom tooling created in-house at Flexpak. The updated cookie trays are created in an efficient four-step thermoforming process.

Initially, a pin chain takes the film to an oven where it is heated on both sides. It is then indexed to a formation station where the customized tool is mounted to create the “staggered” shape of the tray. There, it is vacuum formed using pressure and mechanical assistance. The product is then indexed to a cutting station where it is die-cut to finished container specifications.

“The trays nest very well, maximizing quantity count per carton,” says Berger. “Of course, quality film has a lot to do with the consistent flow of film material into the staggered cavities that hold the cookies.” Trays are sent to the Allen and Cowley's warehouse where the cookies are hand packaged by members of the 45 person staff employed there.

During the 2005 winter holidays, the cookies' original two-column tray packaging was still on the shelves. But in January 2006, the new smaller box and redesigned tray made its shelf appearance. “The packaging re-launch coincided with the depletion of the original tray inventory. We started supplying Allen & Cowley with the redesigned tray in December 2005, in time for January shipments,” says Flexpak's Berger.