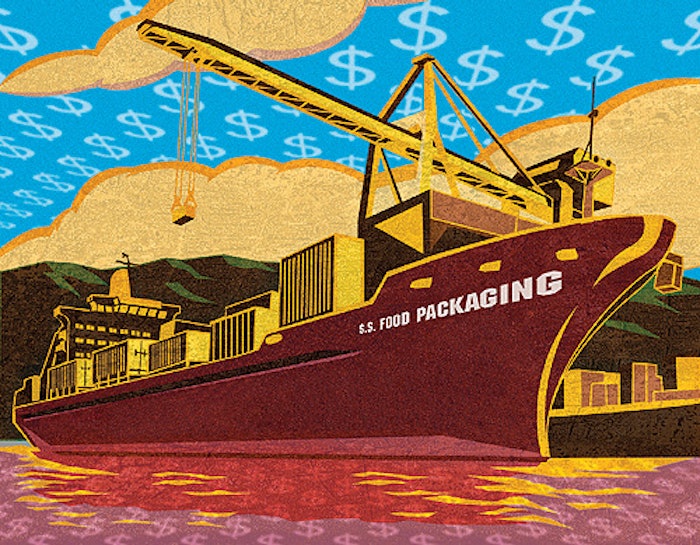 If you are importing packaging materials for food products, get ready for uncustomary complications at customs. The costs of getting packaging off the docks, onto the trucks and trains, and all the way to the factory are going up. So are the administrative complications, as a result of the rules the Food and Drug Administration (FDA) is writing for the Public Health Security and Bioterrorism Preparedness and Response Act of 2002, which takes effect December 12, 2003.

The first reality is that any company that imports finished food packaging—and all the permutations that make up that category are as yet unclear—will have to notify the FDA electronically by noon the day before the packaging hits an American border crossing or port of entry. Companies will likely designate customs brokers to do that notification.

The second reality is that for packaging buyers the cost of imported and domestic food packaging is going to go up. Customs brokers will charge a pretty penny for completing and staying on top of the Bioterrorism Act paperwork. Importers of finished packaging will have to pay those new charges and so may importers of packaging “constituents,” those upstream components such as rolled paperboard and adhesives, just to pick two examples.

So far, the food industry has focused on the impact of prior notification on importers of food. The impact on food packaging hasn’t yet caused too much heartburn. However, the Society of the Plastics Industry, the Flexible Packaging Assn., and some others have been making the argument to the FDA that Congress never intended that finished food packaging, much less its constituents, be included in the prior notice program.

By and large, most packaging people seem to believe that the volume of finished food packaging imports is low. For example, not one of the trade associations involved has compiled statistics on imported, finished packaging.

Had the associations done this, they could bolster their case. A cursory spin through the Department of Commerce’s import statistics turns up product categories that appear to contain food packaging subcategories, although they are rarely labeled as such.

Take the Paper and Paperboard category. It has over 100 subcategories. A quick look through 10 of them finds three that appear to include, partly or wholly, finished food packaging. One is vegetable parchment paper, in rolls or sheets. Imports in 2002 were $11.7 million. Trays, dishes, plates, cups and the like made of paper or paperboard accounted for $13.7 million. Molded or pressed articles of paper pulp weighed in at $26.1 million.

The whole point of paying more attention to where imported food packaging and foods come from is to prevent incidents where terrorists poison food overseas before it is imported into the United States. The prior notice requirement is the most controversial of three stemming from the Bioterrorism Act; the other two involve registration of facilities that produced food and packaging, and record-keeping of where the food packaging comes from and goes to.

The Bioterrorism Act explicitly mentions food packaging as being covered by the record-keeping provision. So the industry cannot make an argument that it is not covered. The application of the facility registration provisions to food packaging is less of a big deal because registration is a one-time thing. But companies that import food packaging have to notify the FDA each time a shipment lands on U.S. shores.

Moreover, as opposed to the record-keeping requirements, it is not at all clear that Congress intended prior notification to apply to food packaging. Rep. John Shimkus (R-IL), who “managed” the Bioterrorism bill for House members during the House-Senate conference in May 2002, said at the time: “Section 307 dealing with prior notice of imported food shipments should not be construed to apply to food packaging materials or other food contact substances if, at the time of importation, they are not used in food.”

Of course, as is the case sometimes with congressional statements, that language isn’t particularly clear and leaves the FDA plenty of wiggle room. In a meeting in February, FDA officials used the example that the liner inside a box of breakfast cereal would be covered by the rule. The cereal box itself would not be covered.

Not everyone buys the FDA’s interpretation of the Bioterrorism Act. Marla Donahue, president of the Flexible Packaging Assn., considers finished food packaging to be packaging that is formed, filled and sealed, and ready for distribution to the intended consumer. Therefore, she adds, cereal box liners and similar packaging cannot reasonably be classified as “finished food packaging” because they will be subject to further handling, storage, and converting before they can serve their intended purpose.

Whether the FDA buys this argument—backed by SPI and others representing packaging manufacturers—remains to be seen. The industry seems to have a better chance of convincing the FDA to exempt more upstream forms of food packaging.

For example, at the February meeting, an FDA official said that imported polymers, additives, or monomers wouldn’t be covered. But Ralph Simmons, the FDA packaging expert at Keller and Heckman, the Washington law firm that represents SPI and packaging manufacturers, argues that this interpretation is in effect cancelled out by the language in the FDA’s proposed rule that says that “components of immediate food packaging” are covered.

What about imported rolls of paperboard and the like? John Burke, president of the Foodservice & Packaging Institute, Inc. says some of his members import rolls of paperboard from Canada. “Institutional food packagers haven’t done heavy importing in the past. But we are starting to see more polystyrene coming in from Asia,” notes Burke. “Additional costs from customs agents could chip away at this.”

Just as no one knows how much food packaging is imported, no one knows what additional costs will accrue as a result of the prior notice mandate. A considerable amount of information will have to be gathered on each import shipment.

This notice must contain the name of the individual and the firm submitting the notice, the entry type and U.S. Customs entry number associated with the import, the FDA product code, the identity of the article of food being imported, and too much else to list here. Additionally, the notice must be updated if the port of entry or arrival time changes one hour, if earlier, and three hours, if later, than the original predicted arrival time.

Just imagine the poor warehouse guy at the produce company in the Salinas Valley in California sitting on the dock with his chin in his hands worrying about whether the ship with the vegetable wrap from Moldavia hit a storm in the Pacific, and whether it will arrive at the Portland port at 10 p.m. instead of 10 a.m. And what if the product codes were mismarked? Yikes!