Two notable packages uncovered at Pakex 98, held recently in Birmingham, England, both come from food marketers. One is for soup, the other for a product designed to look like Chinese take-out food.

Can a film-sealed, thermoformed polypropylene bowl lidded with a clamshell of polyvinyl chloride move soup out of the appetizer segment and into the snack category? The Sauce Co. of Scunthorpe, Lincolnshire, England, aims to find out. Last fall it used just such a package to launch Soup to Go(TM), a chilled soup with 18 days shelf life from date of manufacturing. According to managing director Paul Smith, "The package is a great way to move soup away from the starter and into the snack category. Its value increases to that of a bagel or a sandwich." Anson Packaging (Haddenham, Ely, England) thermoforms both the bowl and the clamshell. The clamshell houses a spoon and crouton package. The clamshell features tabs on opposite ends of the oval that slide into slots in the bowl's handles. A paperboard band displays graphics, preparation instructions and ingredients while helping hold the components together. The Sauce Co.'s primary business is supplying soup to the foodservice sector. As a result, it was able to use three of its existing vegetable-based formulations for last fall's launch in the new retail container. The retail price is between $1.70 and $2.20. "Initial reaction to the concept has been positive," according to Smith. Since soup is considered seasonal by many U.K retailers, the product is currently off the market with a return planned for fall. Also uncovered at Pakex was a paperboard pail for Chinese-style foods. Although instantly associated with Chinese take-out in the U.S., the squared-off paperboard pail does not trigger the same associations in other countries. For instance, aluminum containers with crimp-on paperboard discs are the rule for Chinese take-out sold in the U.K. So why was the paperboard pail the package of choice when U.K. food marketer Maysan Foods recently launched its single-serve China Box rice/sauce combination entrees? Because the 13- to 25-year-olds targeted by Maysan have been constantly exposed to this package format via movies and TV shows imported from the U.S. Maysan's package represents 18 months of development work with Mayr-Melnhof Packaging (Chester, England). The Ready-Wave(TM) container technology actually belongs to Fold Pak Intl. (London, England), but MMP has exclusive rights in the U.K. to produce the containers. The carton consists of solid bleached sulphate with a special, but unidentified, barrier coating. MMP also created the graphics that were designed to attract targeted consumers. The offset printing is done in four colors. China Box is being marketed as a microwaveable product. But the container is also able to withstand conventional oven temperatures of 375° to 400°F, according to Francis Renfrey, marketing director for Mayr-Melnhof. "The coating creates a container that can withstand high temperatures and be liquid- and grease-proof," he notes. In use, consumers access the contents (net weight 3.25 oz) by removing the paperboard tear-strip on top. They then open and pour the contents of a dry ingredient packet over the rice. Next, boiling water is added to a fill line marked on the carton. Contents are stirred thoroughly before microwaving for two minutes. "It provides instant takeaway in a lunch box," says Tommy Foo, owner and managing director of Maysan Foods, which is in Newcastle Upon Tyne. "Initial market response has been very positive." Pails are supplied to Maysan already preformed. They are closed and glued via equipment from Trimcote Ltd. (Gainsborough, Lincolnshire, England). a shrink wrapper from Wrapid Packaging (Bradford, England) applies an overwrap from Cryovac (Duncan, SC). 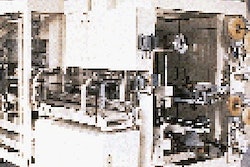 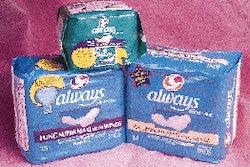