To meet rapid business growth, this maker of stains and sealants adds new conveyors and automated wrappers, improving its speed and handling efficiency.

Jim ButschliJim Butschli
3. Pallets are wrapped at rates of 18 RPM, or a throughput of 50 to 65 pallets/hr.

For many of us around the country, winter can’t end soon enough. Beside ushering in warmer weather, spring gives us a chance to tackle some much-needed outdoor projects. Enter Ready Seal Inc.

The Lewisville, TX, company is a privately-held manufacturer of penetrating stains and sealants used in the treatment of woods in decks, outer walls, fences and other exposed locations. In the 25 years since it was founded, this family-owned Texas company has grown steadily from a local firm selling to contractors into a major supplier of its products across North America, as well as to the Caribbean market area and to locales as far away as Fiji.

“We make one product,” says Mark Mauldin, Ready Seal VP. “It is a combined stain and sealant that penetrates wood and provides a longer-lasting color and protective coating than products remaining on the wood surface. The product is available in a range of colors, and its durability and ease of application have been the source of our success.”

Though it began small, Mauldin reports that Ready Seal has experienced major sales growth in recent years—56% in 2016, 40% in 2017, and a projected 100% growth for 2018. This brings benefits to the company, but challenges to the company’s entire production operation. This is especially true at the end of the production line, where products need to be moved immediately, either being palletized for immediate shipment or for storage while awaiting later shipment.

“Our biggest need was for speed at the end of the line,” Mauldin says, “and automation was going to provide that.”

Product comes off the end of the Ready Seal production lines packaged in either 5-gal buckets or 1-gal pails. The company ships both unit pallet loads of product, or mixed pallets containing both sizes. Depending on existing orders waiting to be filled, pallet loads of product might go directly to a stretch wrapper for preparation for immediate shipping, or be wrapped for storage and later shipping.

In its early days, Ready Seal built pallets and then moved them to an area where they were secured by being wrapped by hand. This was a labor-intensive process, both in the hand wrapping but also in moving unsecured loads of buckets and cartons of product to the palletizing area and then transporting them by forklift to the relevant shipping or storage area some distance away. Hand wrapping also provided minimal film stretch, meaning loads ready for shipping were not as solid as they would be if secured with machine-stretched film.

“That was our second need,” Mauldin says, “to secure loads more effectively to prevent damage during shipping.”

As sales grew, the company acquired two automated stand-alone rotary arm pallet wrappers. This helped increase throughput, but product still had to be moved from the pallet loading area to one of the wrappers, and then a considerable distance to the appropriate shipping or storage area. Wrapping was faster and more secure, since these automated wrappers prestretched film 150%, providing a more secure pallet load (while simultaneously reducing Ready Seal’s film cost).

But as Ready Seal’s growth continued, the labor involved in moving product to and from these wrappers began to create bottlenecks. In 2016, Mauldin was surfing the Internet looking at various available pallet wrapping systems, and found the Pro Mach End-of-Line website, which included a selection of Orion wrappers and accompanying powered conveyors.

“It was immediately obvious that these were complete systems,” he says, “with powered conveyors moving pallets into and out of the wrapper, increasing throughput speed and virtually eliminating the need for manual labor.”

Mauldin contacted Orion’s Dallas-based sales manager Mark Collins, who surveyed the Ready Seal facility and its operation and created drawings designing a system able to move pallet loads with powered conveyors directly to an automated wrapper and then out of the wrapper to a pickup area. From there, loads are moved directly to the dock area for shipping or to the rack area for storage.

The heart of the first Orion system Ready Seal bought is an MA-DX rotary tower stretch wrapper that can wrap full loads at 18 revolutions/min, enabling it to wrap between 50 to 65 loads/hr. It is fed by Orion-made powered conveyors moving loads at rates to 40 ft/min. It features Orion’s Insta-Thread® film delivery system that prestretches film at a standard rate of 260%.

Orion engineers designed the Ready Seal installation in a U-shape configuration to fit into the company’s production area. Pallets are received from a palletizer located at the head of one arm of the U shape. From this location, powered rollers move the load to the first corner, where chain drives then change the movement of the pallet 90 deg to the left for 15 ft, then again 90 deg as it is conveyed into the wrapper. In this way, the pallet always stays in the same alignment as it moves, making it immediately accessible for a forklift to remove after wrapping.

While in the wrapper, the pallet is wrapped from 2 in. above the top of the conveyor roller to as high as 80 in., depending on the load size, guided by the wrapper’s sensors. When wrapping is complete, rollers move the load off to a pickup area where it can be transferred to shipping or storage.

“The system was configured to meet our specific needs and our space limitations,” says Mauldin. “Orion designed it to fit into a busy production area, and when it arrived, we were able to install it with no problems.”

As the company enjoyed continued growth, it purchased another Orion MA-DX system in mid-2017 to handle product coming out of storage to be rewrapped before being shipped to customers.

“This system is installed in an area between the storage racks and the shipping docks,” says Mauldin, “and is configured in a straight line. It works in the same way as the first system, with powered rollers moving the pallets through the wrapper. The only difference is that we added a top-sheet applicator to keep dust and dirt off the loads. We had added top sheets by hand on the original system, but this applicator saves even more labor time.” At the end of the wrap, loads are tagged for shipping and moved to the loading dock.

In both cases, after the systems were installed, Orion’s representative Associated Packaging provided startup support and training.

“What we were looking for was a way to handle pallets faster and more economically,” says Mauldin, “and that is the result we got. We also got more secure loads, lower film costs and reduced labor requirements.”

During the design phase, Orion assessed Ready Seal’s facility and configured both systems to work within the existing physical layouts. “Essentially, what we got was a ‘plug and play’ installation,” says Mauldin. “There were no challenges installing the systems and there have been none since.” 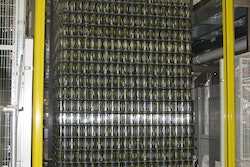 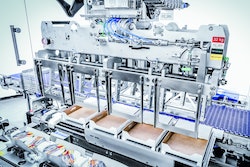