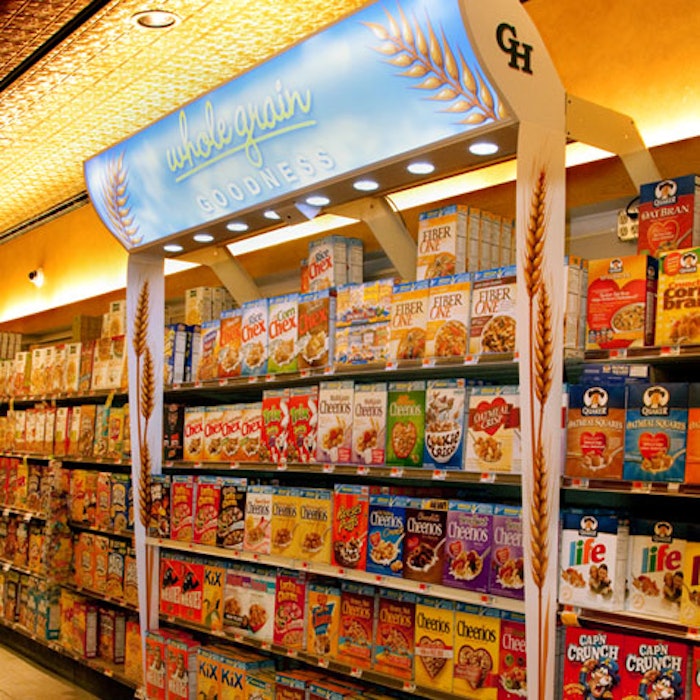 An in-aisle display fixture and the right product messaging can significantly increase brand and category sales and influence brand conversion—while reducing the time shoppers spend making product selections. Success is possible even for brands in center-of-store aisles as mundane as cereal.

These findings were validated in an independent shopper test study, conducted late in 2010, by CART (the Center for Advanced Retail & Technology) at the independent Green Hills supermarket in Syracuse, NY. The results suggest that consumer packaged goods companies and retailers can influence purchase intent by rethinking in-aisle merchandising and communications strategies.

The study spanned six weeks at the supermarket and focused on General Mills cereals, which compete in an aisle where cereal buyers typically are brand loyal. First, baseline data were collected for three weeks in the store and in the cereal aisle. General Mills cereal packages were merchandised in a traditional cereal-aisle configuration, in which competing brands are grouped together based on factors such as package size, flavor, etc.

A three-week test period followed the baseline work. All the General Mills cereal brands were grouped together in a “Smart Showcase” display measuring five shelves high and 8 feet wide. The lighted, acrylonitrile butadiene styrene and steel display unit, visible from both ends of the aisle, featured a product-healthfulness message, “Wholegrain Goodness.”

During the test period, 9,756 shoppers visited the cereal aisle. While shopping in both the baseline period and during the test period, they were videotaped using ShopperGauge technology, which incorporates RetailNEXT®, an in-store shopper-monitoring system from BVI Networks, the display unit from RockTenn Merchandising Displays, and floor graphics from an unnamed third-party manufacturer, General Mills approved the release of the survey findings but did not commission or participate in the study.

Comparisons of the baseline and test data revealed a number of insights:

• On-message brand-blocking is important not only in engaging the shopper, but also in helping them to quickly understand the shelf set and select the right product. A critical finding was that both an in-aisle display and brand messaging reduce what Jon Kramer, chief marketing officer at Rock-Tenn, refers to as the shopper’s “baffle factor.”

• Just as important, the average amount of times shoppers spent in front of the display decreased 7 seconds from the base period. They were able to navigate the cereal selection and choose the product they wanted in a shorter period of time.

• The “Wholegrain Goodness” brand message on the display converted more shoppers to buyers. This was determined by calculating the percentage of shoppers who purchased from the General Mills selection versus the rest of the cereal aisle.

In short, Kramer, says, “This test showed us that optimal on-shelf messages convert more people to purchase. They stopped and purchased more cereal in the aisle.”

Kramer concludes that the study, which will be conducted soon in the pet and beverage aisles, provides important information for both CPG companies and retailers to arm themselves with for creating better merchandising strategies that engage shoppers.