Club stores stay 'hot' with packaging a key to sales

Recent developments focus on the effective use of display pallets and new ways of reining in costs. It’s a singular outlook on “shelf impact.”

Jim Peters
A key club-store packaging rule is to have pallets with 360-degree display that catches the shopper's attention from any side. P

Club stores continue their hot growth. And the unique environment they create makes packaging a critical component in any strategy aimed at generating sales in these outlets. Factors that must be considered include these:

• Pallets need enough pizzazz to sell brands in a drab merchandising environment where packaging is often the only selling tool.

How hot are club stores? Industrywide, sales growth exceeded 10% in the past year; that includes increases in the total “ring” in existing stores and sales from new stores. Annual sales of the “big three”—Costco, Sam’s Club, and BJ’s Wholesale Club—approach $90 billion. Of all retailers in the United States, only Wal-Mart stores exceed that dollar volume.

No wonder package development draws a lot of attention in this environment. “Club stores are about the only retail channel that CEOs of top packaged goods companies visit,” notes Mike Richmond of Packaging & Technology Integrated Solutions, a consultancy that works with marketers to improve their club-store packaging. “They don’t go to Kroger, and they don’t go to Home Depot. But the CEOs do go to Sam’s and Costco.”

One of the things they see is that pallets are a central element in making packaging work in the club store environment.

“At club stores, your pallet is your shelf,” says Lance Holly of New Creature, a retailing consultancy specializing in the high-volume retailing arena. “You have to make it look good because shoppers can walk by it more easily than a display in a Wal-Mart or a Target. The shopper has to look at the pallet and know what it is. It has to meet the three-second rule.” Holly should know: He’s a former Sam’s Club buyer.

The pallet is the ‘retail shelf’

According to Holly, one factor in making the pallet an effective “retail shelf” is to build it with the goal of having three-and better yet four sides deliver visual impact. That’s because packaged goods marketers have virtually no control over the way the pallet is displayed. It may be beneath a rack, it may be on an end cap, or it may wind up in the middle of an aisle. It needs to deliver visual impact no matter how the club store displays it.

A corollary factor driving the 360-degree pallet approach is the way club stores display pallets along aisles. Costco primarily displays pallets on the 48-inch side of the standard 40- by 48-inch pallet. Their rack systems accommodate that orientation. Sam’s Club, on the other hand, primarily displays pallets on the 40-inch side. Rather than having different pallets for each retailer, packagers need to develop pallets that works both ways.

“The packager has to consider every element in the pallet,” Richmond explains. “Sometimes pallets for club stores are assembled to reach a certain product value such as $2귔 worth of merchandise. So there may be dunnage and space-fillers in the pallet. How do you handle that ‘white space’ inside the pallet? If you just use brown corrugated, the result is that it looks bad and you won’t get the sales.”

Club stores are a focus of display pallet development, but packagers need to extend their efforts to pallets destined for mass merchandisers, too. Often, these retailers also rely on pallets as merchandising tools for special promotions.

A part of that total solutions strategy is also to look at ways of creating pallets with a minimum of pallet debris to handle. Club stores, like mass merchandisers, work with a bare minimum of store help, and they want to discard the least amount of packaging materials.

“The only thing [club store managers] want their employees to handle is the pallet jack and cash,” quips Holly in emphasizing the dislike for palletizing materials that must be disposed. “They don’t want case cutting. They don’t want people moving packages. Just drop the pallet and sell.”

Focusing on the pallet is only part of a successful club-store strategy. Club stores also create special requirements for primary and secondary packaging. In some areas, there is an inherent conflict between what the retailer wants and what the consumer wants.

“Club stores want the big packs with the big dollar rings. They also want something unique. They don’t always want the conventional multipacks,” says James Sorensen, vice president client services for Sorensen Associates, an in-store research company. That often that translates into larger size packages—three pounds of a pasta product in a pouch or a carton rather than three one-pound packages joined in a multipack. Unfortunately, the consumer may prefer a different approach.

“Consumers prefer smaller packages—bundle packs,” Sorenson goes on to say. “Consumers are willing to go down in size and find something with a smaller ring, even if the club stores want a larger package.”

Part of this conflict stems from the fact that club stores aim at two different kinds of customers: small businesses and ordinary households. Club stores target small businesses where bulk containers—the three-pound sizes—appeal to buyers. Larger households may purchase these bulk containers, too, but a significant number of them prefer multipacks of several smaller packages adding up to the three-pound target.

Costco traditionally has had a larger percentage of members who are small businesses compared to Sam’s Club. Businesses make up as much as 60% of Costco members. Sam’s Club, however, has emphasized business customers in recent years, a move that observers say has spurred its growth.

That strategy has an impact on packaging, pushing some product categories into simpler, less-expensive packaging. The belief at Sam’s, according to Lance Holly, is that small business owners shopping at a club store want the lowest possible cost and are not interested in paying any extra costs for packaging. Sam’s sees wringing every fraction of a cent out of packaging costs to meet that objective.

One category already following that strategy is janitorial supplies. Cases are printed in one color—black—with graphics as simple as possible. The ready-display shippers carry straightforward type with generic product descriptions such as “Large Cotton Mop Heads.” Holly believes such graphics result from a directive from Sam’s Club to vendors.

The use of straightforward type is common in club stores, where legibility is stressed. A common approach is to print a generic product description across the lip of ready-display shippers. Typically, it would be in three-inch, block capital letters that shoppers can read from the 12-foot-plus distances from which they first see cases.

However, be cautious in this approach. “Be careful not to cheapen the design just to improve legibility,” offers Bill O’Connor, president of Source/Inc., a design firm with an extensive portfolio of club-store packages. “Graphics have to maintain the value of a brand—especially if you have the clout of a Herbal Essence. The packaging has to speak about the quality of the merchandise.”

One packager that adheres to that strategy is Tyson Foods. Its ready-display shippers dominate sections of freezer cases in club stores. Rather than relying on simple, direct-print type on corrugated, Tyson affixes four-color labels to the ready-display shippers. They extend the width of the shipper and extend the full three-inch height of the lip at the bottom of the case. They add the kind of graphic impact that O’Connor suggests is mandatory in club stores.

Cost pressures on consumer items, too

The challenge in club stores isn’t just about graphics, it’s also about costs. And one way to drive down costs is through packaging automation.

West Liberty Foods, West Liberty, IA, is a good example. The firm turned to sophisticated automation to package a lunchmeat kit that met volume and price criteria for Sam’s Club. The kit is sold through deli sections at Sam’s Club, and it holds a total of 4.5 lbs of three different sliced meats—smoked ham, smoked beef, and smoked turkey. It also holds three varieties of cheese to round out a party-pack for holidays and festive occasions.

The primary packaging has to support a retailing strategy that delivers a ready-to-serve tray from the deli case. In doing that, West Liberty Foods delivers the meats arrayed on a coated 15- by 15-inch polypropylene tray that is nitrogen flushed and sealed with a flexible lidding stock to deliver a modified-atmosphere package.

The sophistication is in creating the meat tray using slicers from Weber North America. The operation uses three Model 903 slicers; each slices one variety of meat and drops it in a circular, folded configuration onto conveyers. The conveyors are, in simplest terms, robotic arms that array the sliced meats in a circular pattern. The first conveyor creates the bottom layer of meat; then, the second conveyor places the next meat variety atop the first, creating a second tier that is slightly “stepped in” from the diameter of the lower tier. The third conveyor performs a similar operation.

The trio of meats is then indexed onto a paperboard tray and automatically loaded into the polypropylene barrier tray. The completed tray then goes into an S45 tray-sealing machine from Ross Industries where the package is flushed with nitrogen and the UV light and oxygen-barrier lidding stock is sealed to the tray.

The slicing, positioning, and sealing operation runs at a rate of seven packages per minute, according to Andy Jaspers, director of R&D for West Liberty Foods.

Packaging the cheeses isn’t quite as cutting edge. Each of the varieties runs through a Weber slicer and is packaged on a Reiser Repak horizontal form/fill/seal unit, where each package is nitrogen flushed.

“We assemble trays of meat along with pouches of cheese in the final shipping case,” Jaspers explains. “We put in one tray with the meats, and right beside it we put in three packages of cheese—Swiss, cheddar, and pepper jack. It is a manual packing operation, and we get four kits into each case. Each kit is in its own layer and makes one complete meat and cheese deli-tray.”

At the club store deli, an employee removes a meat package and the cheese packages from one tier in the shipper. The deli employee removes the lidding stock from the polypropylene tray used in shipping, removes the meats that are on the paperboard platform, and puts the platform with the meats onto an in-store deli tray. The employee then removes the three cheeses from their pouchs and arrays them on the in-store deli tray. A snap-fit lid goes over the tray of meat and cheese, creating a ready-to-serve package. Shoppers then buy the entire kit for parties and other occasions.

No matter what the tactic, packagers have to learn new ways to deal with issues that are specific to club store and other merchandisers who rely on mass displays to sell products.

See sidebar to this article: In my humble opinion... 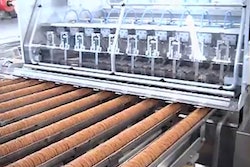 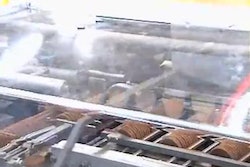