Bookstore chain Borders Group moves to a customized loose-fill system for distribution of its products to stores nationwide. Yearly savings are in excess of one million dollars.

Marci Merola
Loose-fill dispersion at Borders (above) is activated by a footpedal. A central conveyor moves cartons into position to be fille

It's hard to believe that the expanded polystyrene (EPS) peanut could save a company a million dollars. But that's what's happened at Borders Group, Inc., the Ann Arbor, MI-based corporation comprising Borders Books and Music and Waldenbooks. Formed in 1995, the corporation is the end result of reorganization by then-parent company Kmart Corp. Although the two are operated as separate companies, their distribution centers are jointly run. Waldenbooks had been using EPS loose-fill peanuts for distribution of its books and accessories for years, but with the merger came a move to use kraft paper instead. "The people in store operations wanted to go with paper because they were concerned with the housekeeping problems of peanuts, and also environmental issues," says Pete Dubuisson, director of distribution at Borders' Replenishment Distribution Center in Nashville, TN. "For a while, at least two years, we were using paper." But when the high cost of paper became a concern, "We decided to look at the situation again," says Dubuisson. He calculated that if the distribution centers switched from kraft paper to an EPS loose-fill system provided by Free-Flow Packaging Intl. (Redwood City, CA), they could save 65% in material costs, 20% in labor costs and 15% in freight. According to Borders Group, this change would save $1.8 million a year. Free-Flow Packaging is also known as FP Intl. Still, the decision to switch to FP Intl.'s loose fill system had to be carefully thought out. After all, the company's eight distribution centers ship more than 6 million cases yearly to at least 1ꯠ stores. So implementing the system would be no simple feat. There were two major concerns at hand: First, the retail stores were not laid out to handle large volumes of loose fill; second, employees questioned the environmental soundness of EPS loose-fill peanuts compared with paper. FP Intl. was in-strumental in addres-sing these concerns, and eventually, says Dubuisson, Borders decided to switch. Borders elected to use Flo-Pak, FP Intl.'s 100% recycled loose fill. To address employees' concerns over the use of EPS, FP Intl. distributed literature explaining how Flo-Pak is produced from used PS packaging, comprising 35% post-consumer material and 65% plant scrap, according to FP Intl. The literature also addressed how the loose fill could be reused, and it described "The Peanut Hotline," a national reuse program for loose fill sponsored by the Plastic Loose Fill Council (Oakland, CA). To accommodate Borders' small workspace requirements and clean-up concerns at the retail level, FP Intl., in cooperation with consultant Made in the Shade (Moorpark, CA), designed a loose-fill unpacking/storage unit with a unique collection area that keeps loose fill from falling on the floor. The consulting firm also erected and shipped these systems to Waldenbooks and Borders Books & Music stores. The distribution centers received special treatment, too. "Free-Flow went to each distribution center to look at specific spaces available and what the peak processing capacities were," says Dubuisson. "Then they configured and installed the overhead storage and dispensing system specifically for each center." Variations come with placement of overhead EPS storage bags and conveyors. Borders Group finished implementing the system into its distribution centers and stores around May of '96, says Dubuisson. Dubuisson explains how orders are filled: "Items are manually placed into shipping cartons. They convey from the individual picking zones to a central location or locations where the peanut bags are located. So as the open carton arrives, the operator will either reach up and press a hand lever or press down on a foot pedal to dispense the peanuts. Once they do that, the valve opens up and the peanuts flow by gravity into the carton," he says. "Then the carton proceeds to an automatic taping machine." Cartons are then shipped to retail stores. At the retail level, Borders Store employees use the unique FP-designed unpacking unit to unpack cartons. Called the Flo-Vac SRT(TM), the system comprises a 36" x 48" table with a grated top over a collection area, an overhead storage bag, and a flexible vacuum hose. Employees turn cartons upside down so that loose fill falls into the collection area below and products remain on top. "There's a vacuum hose connected below [the table] that routes the peanuts upward to the storage bag hanging from the ceiling," Dubuisson says. "That bag also has a nozzle so that if you're shipping merchandise, you can press a hand lever and the loose fill will flow out into the shipment." FP Intl. has also helped solve the problem with unpacking of CDs and music items. "When we get music in the stores," Dubuisson continues, "we like to unload them right on the selling floor, whereas books are loaded onto shelves in the back rooms. Because the cartons are on the floor, we have a problem with peanuts on the floor in the sales area. "FP has developed portable units that actually vacuum out the carton as you open it," he explains. The portable system, the Flo-Vac III, consists of an electric vacuum unit with a long flexible nozzle that is said to fit standard, wheeled 55-gal trash cans. Each can holds up to 7 cu' of loose fill. Each store was equipped with one or more of the units, says FP Intl. Leftover loose fill that is not reused by Borders Group is sent to nearby pack-and-ship stores where agreements have been made to accept it for reuse. All in all, Borders is pleased with the performance of the Flo-Pak systems. "They've met all of our expectations," says Dubuisson. 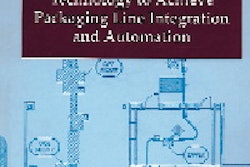 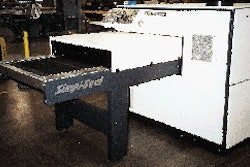 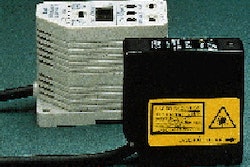