As baby boomers continue to age and adherence packaging becomes more important than ever, one clever company built a 134-axis servo-driven system to crank out lots and lots of blister-style adherence packs. 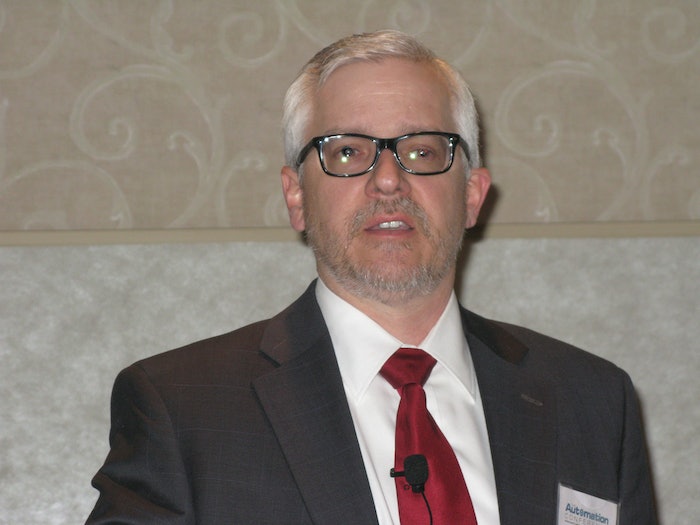 That company is MWV,  whose Lee Miller, Director of Engineering Machinery & Automation, talked about the machinery’s development at The Automation Conference, produced by Summit Media Group May 20-21 in Chicago.

As Miller explained, MWV’s Shellpak adherence packaging concept came out about eight years ago and became popular in Walmart stores. It’s essentially a blister pack that combines calendar information so that when patients push a dose of medicine out of its blister pack, they have a visible reminder on a calendar that that dose has been administered. Now MWV has migrated from Shellpak’s blue polystyrene outer shell to Shellpak Renew’s paperboard shell. Why? Because customers prefer it, it’s more sustainable, and it permits higher operational throughput.

Essential in this transition from Shellpak to Shellpak Renew was the design and development of a three-part packaging system capable of inserting blister packs into the paperboard shells, inserting shelled blisterpacks into cartons, and palletizing cartons robotically—at 300 blister packs/min. The integrated full-line packaging solution that emerged includes a total of 134 axes of servo motion. According to Miller, the only way to build such a machine affordably was to use a servo architecture that did not position drives in a control cabinet as is traditionally done. Instead, MWV opted for an on-motor drive system from Bosch Rexroth  and a one-cable solution for communication and power. By Miller’s calculations, in a traditional installation where drives are in a cabinet, 8,100 feet of cable is required to power and drive X number of servo motors. By using on-motor drive systems, MWV needs  just 1,400 feet of cable for the same number of servo motors. An additional benefit is that with on-motor drives, the controls cabinet that is required is dramatically smaller and it requires no air conditioning.

The fully integrated system that emerged was installed at a pharmaceutical plant in December 2013—pretty impressive considering that specifications for the system were only finished in April of 2012. It consists of the MWV SPR2000 Shellpaker, the MWV CTR1000 Cartoner, and a KUKA  palletizing cell. In addition to operating at 300 blister packs/min, it requires minimal time for packaging format changeover, it requires just five operators, and it is currently running at about 90% uptime.