At Heineken South Africa and Microsoft Europe, efficiency-minded suppliers help make processing and packaging logical extensions of each other.

Packaging machinery OEM Krones and folding carton converter Mediaware would seem to have little in common other than the fact that both are headquartered in Europe. But a closer look at their activities reveals an interesting common denominator: both are capitalizing on business opportunities where customers are seeking a tighter integration of processing and packaging.

Let’s start with Krones, a German firm with age-old roots in the beer and spirits industries that more recently has blossomed in the juice, water, dairy, and carbonated beverage industries. Its latest area of interest is in the IT space, and much of Krones’ emphasis has been on tightly knitting together not just processing and packaging but even raw ingredient handling and logistics.

Heineken’s new Sedibeng brewery, on the outskirts of Johannesburg, South Africa, is a good example of what Krones has been up to. From processing, to packaging, to a full-coverage Manufacturing Execution System (MES) interfaced with Heineken’s own SAP Enterprise Resource Planning (ERP) system, the Sedibeng Brewery is a model of tightly integrated manufacturing methods.

To meet Heineken’s requirements, Krones developed the software for a route management system. The DynaRoute intelligent route management system, deployed here for the first time, controls the flow of beer from the tank farm to the packaging lines. The routing algorithm uses the source and destination specified to automatically compute all paths and parameters required for any desired product-transfer operation, including all upstream processing and downstream packaging operations.

IT components at the Sedibeng plant include MES Beer Production and MES Packaging. Both have standard interfaces like B2MML or XML to permit fluid communication with the ERP system above them.

The MES is between ERP and the plant floor. ERP communicates with MES, which in turn tells the PLCs out on the plant floor what needs to be done, just as it’s defined in S95, the international standard for the integration of enterprise and control systems. Part of the Krones MES Beer Production solution is a module called OPI (Operational Performance Indicator). The performance of the brewhouse and filtration processes are monitored by the MES and rendered quantifiable as an OPI, one of Heineken’s specific corporate variables. The tracking and tracing functionality of the MES also enables batches to be completely tracked, from the bright beer tank to the grain intake. The MES Packaging software module for the filling and packaging section was developed on the basis of empirical feedback from a Heineken installation that took place about two years ago in Sevilla, Spain. It consists of the Krones LMS (Line Management System), plus the Krones production data acquisition system LDS (Line Documentation System), in which all important production and process data are recorded and easily accessed for analysis.

Processing is completely integrated with packaging through the controls system. The LMS communicates with MES Beer Production so that, in effect, the packaging lines automatically ask the processing systems which tank do I draw from? This way the right beer goes to the right filler at the right time, and it’s done with so little operator involvement that the chance for operator error is greatly reduced. This represents a significant improvement over more conventional process-to-packaging interfaces, where readying a filling line for the next production order would be done with much more operator involvement. An operator might have had to pull up a menu on the filler’s HMI screen and pick the tank from which beer is to be drawn. Or pipes might have had to be switched manually, based on production order information communicated on paper, or clipboard, or dry erase board.

Among the benefits Heineken enjoys by having processing and packaging so tightly integrated is that they can automatically calculate the precise number of bottles that have to be depalletized to empty a given tank.They know from MES Beer Production how many hectoliters are in the tank and they calculate how many layers of bottles need to be removed from pallets in order to empty that tank. In the past the operator at the depalletizer would have to base his actions on estimates, so there were always too many bottles depalletized for a production run. That meant the empty bottles had to be removed from the line to make way for the next production run. This inefficiency is now eliminated.

This is but one example of how the MES application at Heineken goes beyond being a mere data reporting mechanism and actually offers tools that help operators control things in the plant and bring new levels of efficiency.

Another fascinating example of P2P integration is found in the package converting space. The product is Microsoft’s Windows 7, and the package is a folding carton. The following is adapted from a case history report written by InfoTrends Inc.  “Processing” in this case doesn’t involve food or beverage or pharmaceuticals or shampoo—the consumer packaged goods we usually think of when discussing P2P. But Microsoft makes a product and packages it just as surely as any other CPG company. And it has found a way to integrate manufacturing and packaging that is as seamlessly automated as anything out there today. Much can be learned from this print-on-demand application.

The carton converter is Mediaware, an Irish firm that is using not only a digital printer but also an entirely digital workflow to let Microsoft handle short runs for multiple countries and their varying languages.

The competing bids for the Microsoft contract offered solutions bound by the old rules of conventional analog offset print technology. Competitors relied on the old business model, printing short runs in analog for the best unit price they could offer and storing excess prints for possible use with later orders.

Mediaware, on the other hand, put together a workflow of the future. It’s seamlessly integrated with Microsoft’s order entry, manufacturing, and delivery operations, and it was critical to meeting and exceeding expectations and requirements. Key contributors behind this remarkable implementation are Xerox and Stora Enso, the firms that jointly developed what’s known as the Gallop digital print packaging line. Here is the basic sequence for each of the hundreds of folding carton print jobs Mediaware has delivered to Microsoft since October 2009:

• Initially, Mediaware takes a forecast from Microsoft and downloads the artwork from Microsoft’s global repository into Mediaware’s document library within the Xerox PrintCise program.
• ModusLink, Microsoft’s tier 1 kitting partner in Waltham, MA, places an order to Mediaware in the form of a .CSV that automatically generates a component of the overall bill of materials. • The .CSV file is dropped into Mediaware’s MIS system. Mediaware’s proprietary ArcLink program automatically generates a work order and places it into PrintCise.
• PrintCise automatically retrieves the artwork from the library, adds variable information (country of origin, printer ID, and bar code verification), and drops the job on the Xerox iGen4 digital printer complete with a job ticket.
• The iGen4 feeds via Internet Printing Protocol (IPP) back to PrintCise the status of the job in real time.
• After printing, coating, die-cutting, and gluing, weight verification acts as a final quality control to confirm that the appropriate number of folding cartons was produced. PrintCise outputs a value to a weighing machine. If the value meets the actual weight, a delivery label is released. If not, the job goes into quarantine for evaluation.

The Mediaware workflow is so automated that human hands normally do not touch the carton until it is ready for insertion into the folder/gluer. The jobs are segregated into two queues, one for each of the two carton sizes required, limiting the need to change the settings on the folder/gluer.

Mediaware’s hairman Simon Healy emphasizes that while this is a business solution that has met Microsoft’s expectations, it has tremendous viability for a broad range of folding carton applications from retail to pharmaceutical. “Pharmaceutical companies, in particular, have some of the same business needs that top software companies have,” says Healy. “They have a regular use of small-format cartons, they sell internationally, and they have a high need for secure print.”

We can expect to see some noteworthy extensions of this print-on-demand technology in the pharmaceutical business some time soon. 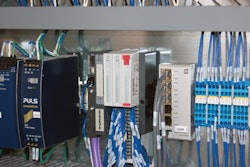 Case packer is 'sophisticated' yet rugged 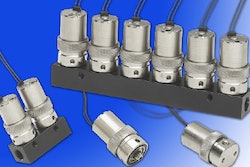 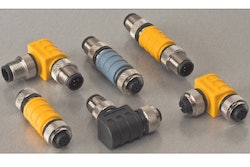