Reports on OTC drug labeling, Codex meeting, fighting obesity with labels, and the Senate's passing of an allergen bill. 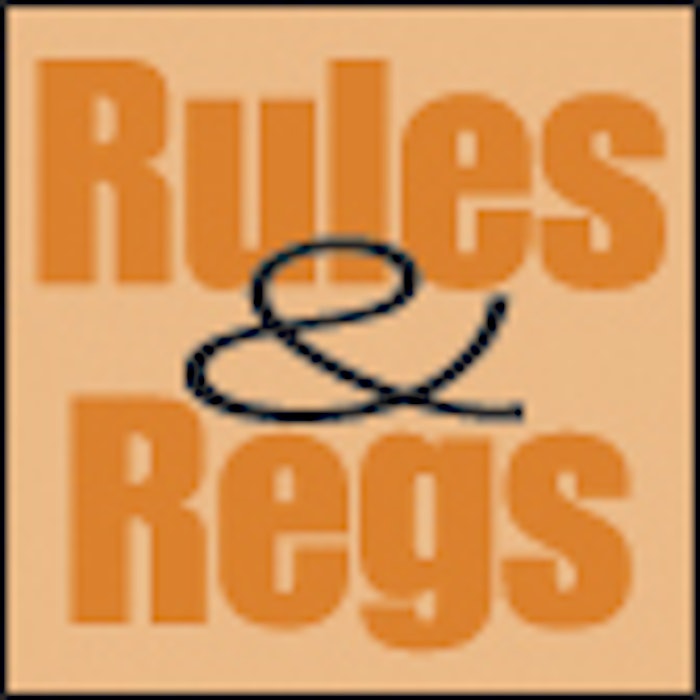 OTC drug labeling for calcium and other ingredients

• calcium content per dosage when the product contains 20 mg or more per single dose;

• a warning statement that anyone with kidney stones or on a calcium-restricted diet ask a doctor before using if the product contains more than 3.2 g of calcium in the maximum daily dose;

• magnesium content per dose when the product contains 8 mg or more per single dose;

• a warning statement that anyone with kidney disease or on a magnesium-restricted diet should ask a doctor before using if the product contains more than 600 mg of magnesium in the maximum daily dose;

• potassium content per dose when the product contains 5 mg or more per single dose;

• a warning that anyone with kidney disease or on a potassium-restricted diet should ask a doctor before using if the product contains more than 975 mg potassium in the maximum daily dose.

In 1996, FDA issued regulations requiring such labeling for OTC drugs taken orally. It asked for comment on whether the regulations also should apply to rectal laxative, vaginal, dentifrice, mouthwash, and mouth rinse drug products. It noted that a substantial portion of daily sodium intake can come from these products, particularly if used often. At this time, FDA is proposing to extend mandatory sodium labeling only to rectal drug products.

The Senate unanimously passed the bill that will make it easier for consumers to spot potential allergens in food products. The bill requires manufacturers to use plain English when listing common food allergens in the ingredient list on food labels.

In addition, allergens in spices and flavorings must be disclosed. Most allergic reactions to foods are related to eggs, fish, milk, peanuts, shellfish, soybeans, tree nuts, and wheat. A similar bill is pending in the House.

The Codex Committee on Food Labeling will meet in Montreal on May 10-14, 2004. Among the agenda items to be discussed are labeling provisions in draft Codex standards; draft guidelines for the use of health and nutrition claims; guidelines for the production, processing, labeling, and marketing of organically produced foods; and labeling of foods and food ingredients obtained through certain techniques of genetic modification or genetic engineering.

FDA plans to revise food labels as part of its antiobesity campaign. The number of calories will be given greater prominence in the Nutrition Fact Panel, probably by using larger type and indicating what percentage of the daily recommended calorie intake it represents.

In a letter to food manufacturers, FDA warned that it will aggressively police serving sizes on labels, noting that companies should "label as a single serving those food packages where the entire content of the package can reasonably be consumed on a single eating occasion." The agency also will consider allowing health claims for foods that meet FDA’s standard of "reduced" or "low" in calories.

Food manufacturers generally praised FDA’s actions, although the NFPA said nutrition labeling requirements need to be thoroughly researched and consumer-tested, so consumers don’t have a harder time understanding the label. In addition to labels, FDA needs to link label information with messages designed to help consumers understand how to eat, not what to eat, the association said.

The Center for Science in the Public Interest said FDA’s proposals are "perfectly sensible" but that the agency was merely "rearranging the deck chairs on the Titanic." CSPI called for major actions rather than small steps.