From ideas about sustainable packaging to insights into what consumers age 60 and over would like to see in beer packaging—lots can be learned from IdeasBrewery.com. 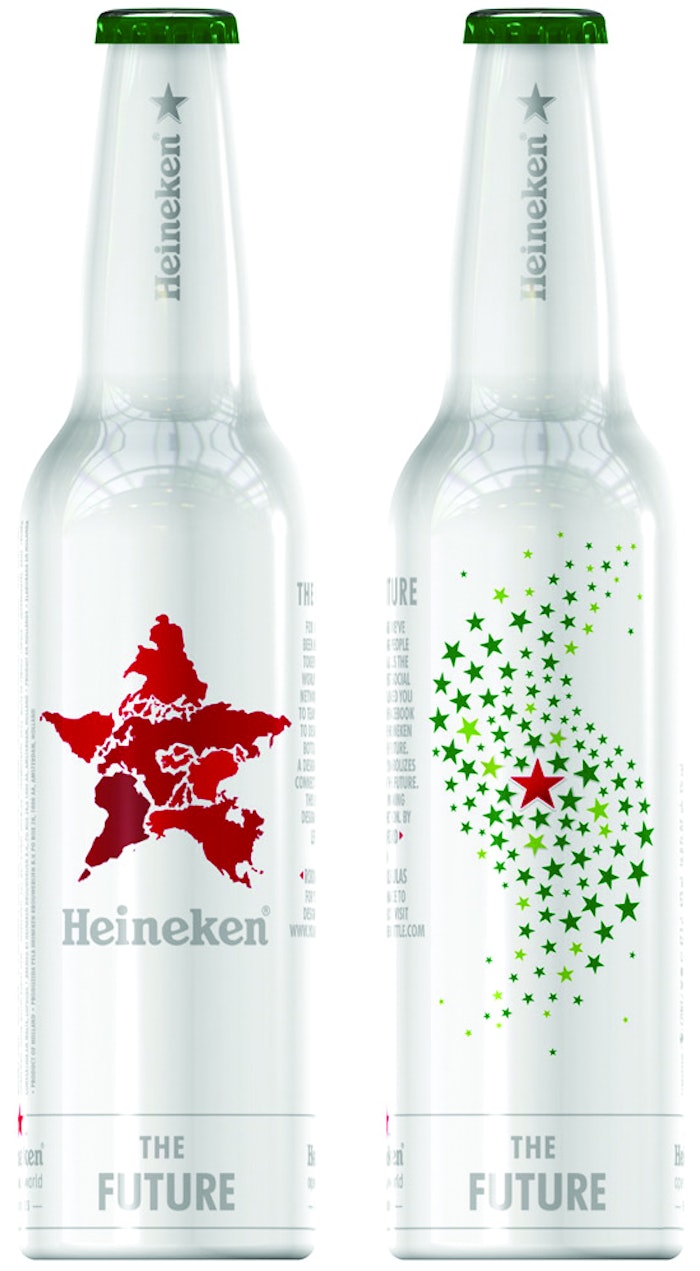 Shown here is the winner of the futurebottle.com challenge in 2012 (Photo A)

A recent press release from Heineken piqued my interest because it described how that firm is using a dedicated Web site called IdeasBrewery.com to leverage crowdsourcing in its approach to innovation generally and to package design in particular. So I made a few phone calls hoping to learn a little more. I wound up learning a lot more—about crowdsourcing, brand building, and innovation—thanks to interviews with Mark van Iterson, head of the Heineken Brand Design and Concept team, and Heineken Innovation Program Manager Ellen Bark-Lindhout. Arranged here in a Q&A format is the essence of those conversations. One bit of background first. The global innovation challenge currently running on IdeasBrewery.com seeks ideas on how to reinvent the beer drinking experience for those who are older than 60. Heineken describes this group as a “liberated” generation of consumers who enjoy more freedom from jobs, children, and stress and who strive more for quality of life, wellbeing, and self-development.

Packaging World:
How long has Heineken been engaged in crowdsourcing and what do you get out of it?

Van Iterson: We’ve been crowdsourcing for more than 10 years now. What’s different about IdeasBrewery.com is that we bring a highly formalized and structured approach to it. We get input from design professionals, packaging materials experts, and industrial designers. Not to mention the fact that it has produced some package designs that have gone into commercial production and been distributed worldwide.

How unusual among your peers would you say it is to use crowdsourcing in the way you do?

Bark-Lindhout: It’s difficult to address what others are doing, especially since crowdsourcing is an up-and-coming thing that’s still accelerating. IdeasBrewery.com was only launched last year. We think it’s a great way to engage consumers with the brand. Our innovation projects have always involved consumers, but usually on a much smaller scale and at a later stage in the project.

Why the current focus on the 60+ demographic?

Bark-Lindhout: We’re interested in all demographic groups, and this is one that we felt we needed to learn more about. It represents a sizeable portion of the population. In fact, one-third of the population of Europe will soon be 60-plus. It’s a time when people generally start drinking less beer. So why not gain insight from around the world into what motivates this group. How do they socialize, how do they differ from other groups, do they want containers that are larger or smaller than what we usually offer, are there carrying or opening features they’re looking for, and so on.

The most striking thing about IdeasBrewery.com is how interactive it is. Are there other programs or initiatives at Heineken that are similar?

Van Iterson: To mark the 140th anniversary of Heineken, in 2012 we issued an open call for bottle designs on Facebook. Designers wishing to submit entries could go to yourfuturebottle.com to enter. The design brief focused on the idea of the Heineken brand being the world’s oldest social network, since we’ve been connecting people over a beer for 140 years. So we asked people for a design envisioning that kind of connection over the next 140 years. In the spring we had judges from Heineken as well as outside people from New York and Tokyo pick a winning design, which was submitted collaboratively by a design student from Mexico and a designer from Australia (see Photo A). The design takes all the continents of the world and arranges them into the Heineken star. This bottle was available commercially late last year as a limited-edition item tied into the holidays. We liked the concept so much that we’ll use it in a number of ways going forward.

What about the Heineken Ignite bottle?

Van Iterson: That came out of our participation in Milan Design Week in Italy, where we presented our vision of a club of the future. One component of that club is a glass bottle with LEDs, micro-sensors, and wireless networking (see pwgo.to/069). It flashes lights in time with music or in response to the motions of the person holding it. You might compare it to a concept car at an auto show. But it worked so well at the concept level that we’re bringing it out for commercial use in clubs.

Was the futurebottle.com a one-time thing or did you bring it back for 2013?

Van Iterson: We brought it back and just recently announced the winner of the 2013 version (see photo B). This time the winner came from Sao Paolo, Brazil, and it involves a technical innovation in the inks that are used. They have a temperature-sensing capability that will alert the consumer when the beer needs to be chilled. It’s a good example of how crowdsourcing helps us learn about new materials that can be used in packaging. We plan to launch it in 2014.

Getting back to IdeasBrewery.com, I see that the challenge preceding the 60+ Insights Challenge was the Sustainable Packaging Challenge.

Bark-Lindhout: Yes, we wanted to look at sustainable packaging from three different angles: materials, transportation, and behavioral change that might stimulate more consumers to return bottles for recycling. We got about 150 entries, and the interesting part about it is that it’s very transparent. Everybody can see each other’s ideas. This surprises some people, who think we would want to keep such things confidential. But we think that if it is open and transparent, we can inspire other potential idea submitters. There’s even a place on the site for commenting on the submissions of others.

What was the winning entry in the Sustainable Packaging Challenge?

Bark-Lindhout: It’s a concept where you scan your bottle when you return it for prizes that are randomly assigned to the bar code on certain bottles. There’s a smart technology involved. We haven’t commercialized it but we’re looking into it, not so much for use in the Netherlands where recycle rates are quite good already. But in other parts of the world it could be very suitable.

What happens to those who win one of the challenges?

Bark-Lindhout: That’s the part that gets very interesting, because we bring the winner and some of the runners-up to Amsterdam and work collaboratively with them to develop their ideas further.

Some who have tried crowdsourcing find it too chaotic. Do you find that to be the case?

Van Iterson: While crowdsourcing is a terrific source of ideas—from agencies, consumers, ink manufacturers—it’s still our responsibility here at Heineken to analyze and synthesize the ideas that come in so that we can effectively take them to the marketplace. One of the biggest challenges is sorting through the many ideas that come in.

Van Iterson: Before, it was all about consistency and heritage. Now it’s more about standing out and creating excitement and engagement. We shouldn’t forget the foundation of consistency that is the Heineken heritage, and yes, we should strive to be iconic. But packaging is such a rich tool to communicate with, so we look for ways to do more than be consistent. Crowdsourcing helps us do this. It results in innovations and limited editions and whatever else we can think of. Our corporate tag line is “open your world.” If that’s true, then we must take crowdsourcing and innovation very seriously and put our money where our mouth is.