CEO says ‘plastic problem is horrific and calls for a change, making Bon Appétit the first U.S. foodservice company to make this commitment. 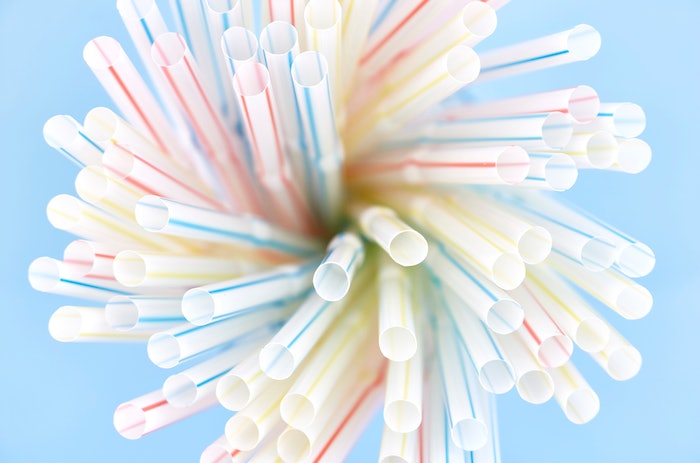 Costing a penny or less each, used once then discarded, plastic straws are the tip of the single-use-plastic iceberg, clogging landfills, waterways, and oceans and poisoning wildlife. That’s according to Bon Appétit Management Company, which cites eco-cycle.com’s statistic that Americans use 500 million plastic straws each day, very few of which are recyclable. Bon Appetit adds that more than 90% of all plastics are not recycled.

Beginning May 31, in keeping with its promise of “food service for a sustainable future,” Bon Appétit banned plastic straws and stirrers companywide in its 1,000 cafés and restaurants in 33 states. The phase-out will be completed by September 2019. Notes Bon Appétit, it is the first foodservice company—or major restaurant company—to make this commitment in the country.

“The plastic problem is horrific,” says Bon Appétit CEO and Co-Founder Fedele Bauccio. “When I heard the stats and learned how much damage is being done by straws—a product of convenience—my gut reaction was, we have to change this!”

“Bon Appétit’s move to eliminate single-use plastic straws sends a resounding signal to U.S. companies that the time for change is upon us,” says Kate Melges, Greenpeace USA’s oceans campaigner based in Seattle, who leads Greenpeace’s Ocean Plastics work. “Its policy shows strong leadership within the foodservice sector, and most importantly proves to all companies that rely on throwaway plastics that it can be done. We can no longer rely on half measures to tackle the plastic pollution crisis. Companies must reduce their plastic footprints to save our communities, waterways, and oceans. This decision provides a tremendous foundation for Bon Appétit to build upon.”

Last month the University of Portland became the first U.S. university to ban plastic straws, with more campuses on the way. In addition to being a client of Bon Appétit, UP is also Bauccio’s alma mater. “This proves it can be done, so why are we still using them anywhere?” he challenged Bon Appetit’s senior leadership team.

The purchasing group leapt into action. In fiscal 2017, the company purchased 16.8 million plastic straws and almost 420,000 plastic stirrers. (Bon Appétit has long set wooden stirrers as its standard, purchasing 9.1 million of them in fiscal 2017, but until now had not banned the plastic version.) Paper straws will be available to guests with physical challenges or who strongly feel they need a straw.

Jason Blake, Chief Sustainability Officer for PepsiCo Beverages North America, shares how the company is incorporating sustainability in every area, with a focus on innovations in packaging that will help the company reach its carbon reduction goals.
Anne Marie Mohan
May 24th, 2021
More in Sustainability