A “Return to Retail” pilot for pet food flexible packaging had an unexpected benefit for store owners.

The Pet Sustainability Coalition (PSC), a US-based group with members that include more than 200 global companies throughout the pet industry supply chain, recently saw initial success with its Flex Forward pilot and is now entering a second phase.

What Is Flex Forward?

Flex Forward aims to create recycling and upcycled solutions for flexible packaging produced by the pet industry. In 2020, a regional pilot tested the collection, recyclability, and full-circle product potential to inform potential for an industry-wide expansion. The first phase of the project focused on 135 retailers to collect a minimum of 5,000 lbs. of used flexible multi-laminate pet food packaging—testing the “return to retail” collections model—with hopes of being able to recycle the packaging into functional products.

Participating retailers received collection vessels, associate training, digital content and incentives to facilitate and encourage pet owners to return to the store to recycle used packages, all at no cost.

An unexpected benefit of the return to retail program was an increase in store traffic, according to Melissa Bauer, Director of Sustainability at PSC.

In addition to the participating retailers and the PSC, other partners in the program include brand sponsor Earth Animal, Pet Food Experts Distribution, recyclers, and several U.S.-based manufacturers.

Next steps in the pilot include testing collected materials to see if they can be used as a raw material in production. The flexible packaging will be turned into pellets, with hopes of formulating them into materials and fabrics to be used in beds, toys, and other pet products. Traditionally, end market use has posed a challenge for the industry.

NOVA Chemicals Corp, a supplier of polyethylene resins, is providing funding and expertise to help with this circularity-focused phase.

PSC estimates 99% of all pet food and treat bags in the United States are disposed of in a landfill rather than recycled, amounting to about 300 million.

The organization says the challenge is the “near impossibility” of separating out recyclable material from bags made by co-extruding and laminating multiple layers of plastic film using current technology.

The Future of Flex Forward

Once the pilot is complete, PSC will look to hone its model and replicate the program on a larger scale. A big focus of the pilot is looking at levels of engagement of retailers and consumers in circularity programs, and the response so far has been overwhelming, Bauer says.

“We are working with everyone from big boxes to small, independent retailers,” she says. “I receive emails almost every day, asking ‘when is this coming to my store?’ Everyone is really falling over themselves to try to get this program in their stores.”

Consumer response also has been positive. Originally, PSC estimated that it would take six months to collect the 5,000 pounds of material needed for its analysis, and it collected the amount—during pandemic-related closures—in four.

“Before we started, we heard that consumers don’t bring back packaging, and that consumers and retailers don’t care about sustainability,” Bauer says. “What we found was the exact opposite—we easily collected the targeted amount.”

According to PSC, consumers participating in the pilot’s first phase brought back pet food bags at four times the national average for regular plastic bag return.

Bauer notes that while average consumers may not have the move to mono-materials top of mind, they are focused on the concept of sustainability. “We had consumers offer to pay retailers to keep Flex Forward going,” she says.

PSC’s biggest takeaway for pet food manufacturers is to recognize that consumer attitudes around packaging processes are changing. “Based on the shopping trends of consumers and the demand of retailers, for brands, sustainability is no longer optional,” says Bauer.

A return to retail strategy for flexible packaging requires pet food manufacturers, materials suppliers, retail companies, consumers, and recycling experts working together. PSC will be releasing progress reports for the next phase of its Flex Forward pilot at www.petsustainability.org/sustainable-packaging. 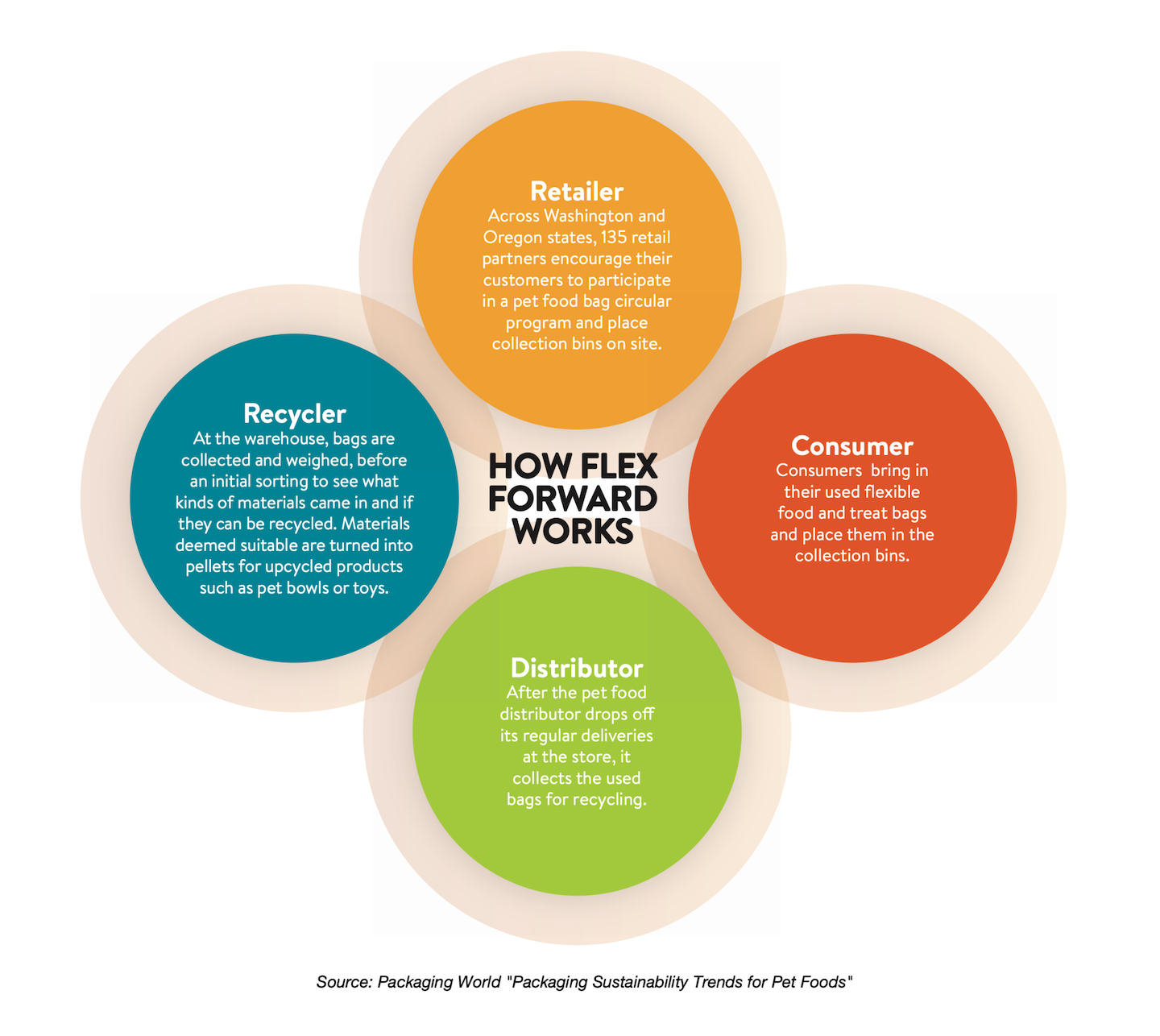