New data from European Bioplastics indicates dynamic growth of the bioplastics market through 2024, driven by an increasingly eco-conscious environment and the development of innovative new materials. 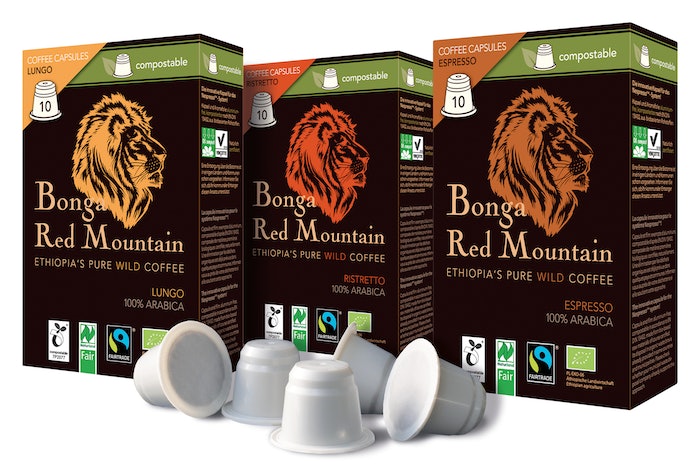 Bonga Red Mountain compostable coffee capsules for Nespresso from Original Food, Germany, are made from specially-developed PLA bioplastics made from corn or bioplastics. Photo courtesy of European Bioplastics.

In 2017 and 2018, Packaging World provided a two-part article that detailed the different categories of bioplastics, their stages of development, and their uses. While some of the market statistics may have changed, the information on the biopolymers themselves is a useful primer for those interested in learning more about these materials. Read “A Bounty of Options for Biopolymers” and “Biopolymer Materials and Technologies Flourish.” 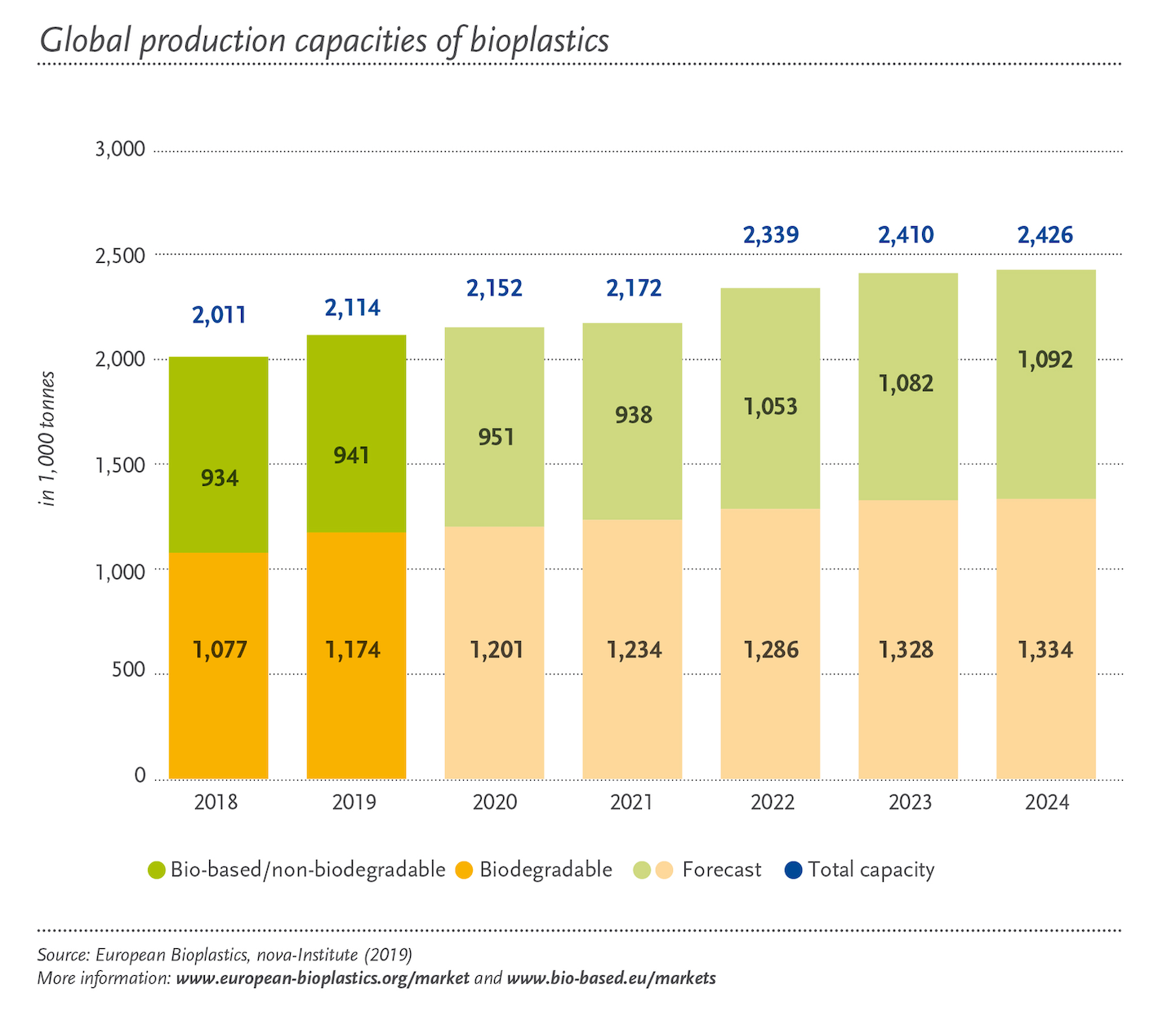 Global production capacities of bioplastics, 2018-2024.Re the current stats from European Bioplastics, they indicate that global bioplastics production capacity is set to increase from around 2.3 million tons in 2019 to 2.6 million tons in 2024. Innovative biopolymers such as polypropylene and PHAs (polyhydroxyalkanoates) are driving this growth, the data indicates. PHAs are an important polymer family that entered the market at a larger commercial scale, which continues to increase. One early supporter of the development of packaging made from PHA is PepsiCo, which is working with Danimer Scientific to introduce a flexible pouch for its snack foods by 2021. In 2018, Brad Rogers, PepsiCo Global R&D Director – Foods Packaging Discovery, shared with PW his insights on how the company planned to reach this goal. According to European Bioplastics, production capacities for PHA are set to more than triple in the next five years. These polyesters are bio-based, biodegradable, and feature a wide array of physical and mechanical properties.

Meanwhile, production capacities for bio-based polypropylene are set to almost sextuple by 2024. In July 2019, renewable diesel producer Neste of Helsinki, Finland, and plastics, chemicals, and refining company LyondellBasell announced what Neste said was the first parallel production of bio-based PP and bio-based low-density polyethylene at commercial scale. The growth of bio-based PP, suggests the association’s data, is due to the widespread application of PP in a range of sectors. PP is a very versatile material that features excellent barrier properties. High-performance PP grades are an ideal replacement for several conventional fossil-based plastics, especially polyethylene.

According to the market data, bio-based, non-biodegradable plastics, including the drop-in solutions bio-based PE and bio-based PET, as well as bio-based polyamides, currently make up around 44%, or almost  (almost 1.1 million tons) of the global bioplastics production capacities. The production of bio-based PE is predicted to continue to grow as new capacities are planned to come on line in Europe in the coming years.

However, intentions to increase production capacities for bio-based PET—a material first introduced by Coca-Cola in 2009 in its PlantBottle package for Dasani and subsequently used for a number of applications, including haircare and food packaging—have not been realized nearly at the rate predicted in previous years, but have actually declined over the years. Instead, the focus has shifted to the development of polyethylene furanoate. PEF is comparable to PET, but it is fully bio-based and furthermore features superior barrier and thermal properties, making it an ideal material for beverage bottles, the report says.

Although the European Bioplastics report noted that the PEF is not expected to be available until 2023, recent news indicates that Stora Enso may be producing PEF at pilot scale as early as the first quarter of 2021. The company announced on Dec. 10 that it is investing EUR 9 million to build a pilot facility for enabling the production of bio-based plastics as a barrier in transparent packaging. The pilot plant will convert plant-based sugars into the renewable building block required to make PEF and will be located at Stora Enso’s Langerbrugge Mill in Belgium. 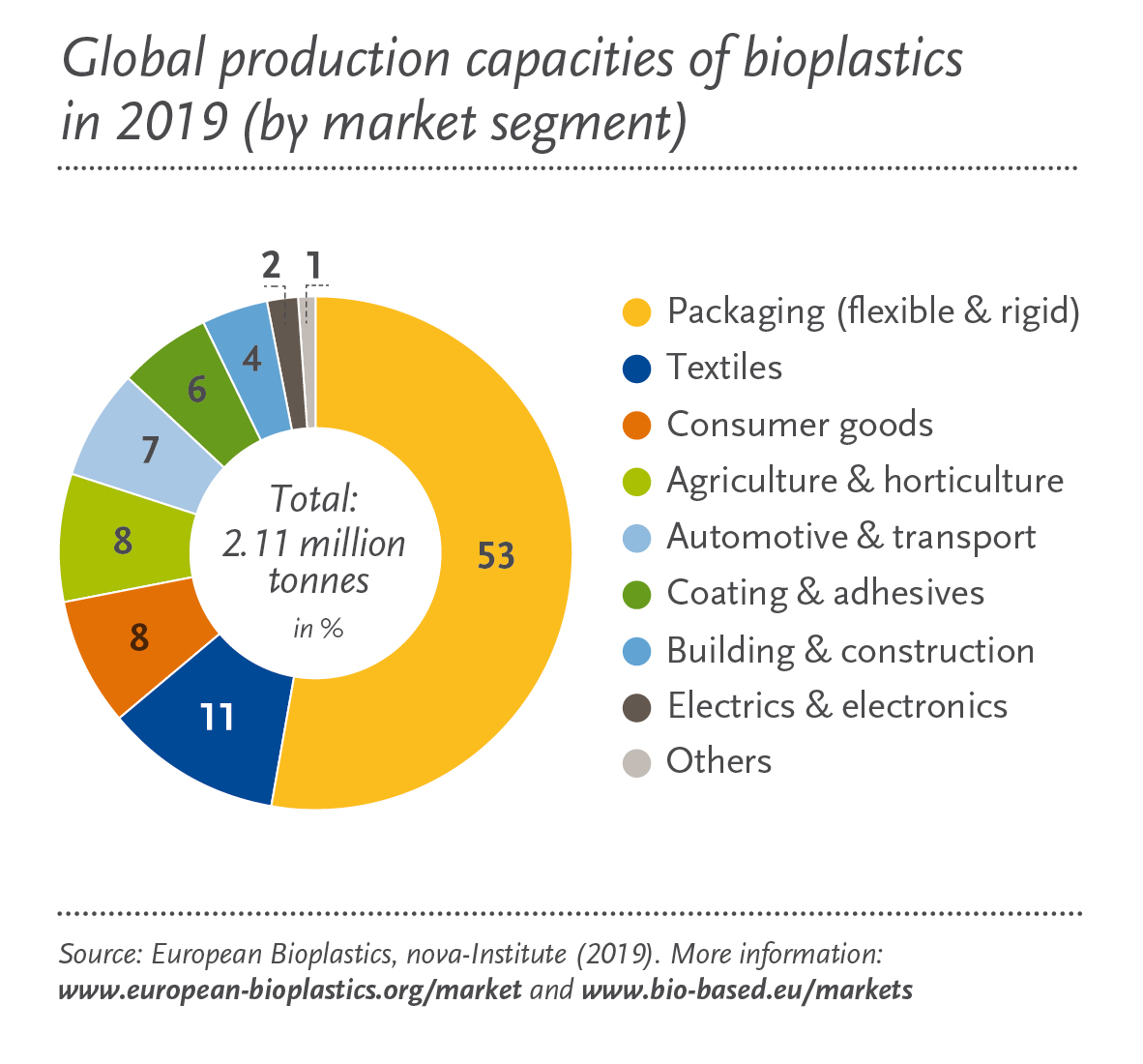 Global production capacities of bioplastics in 2019 by market segmentIn terms of applications for bioplastics, the data reveals that packaging remains the largest field, with almost 53 percent (1.26 million tons) of the total bioplastics market in 2019. The data also confirms that bioplastics materials are already being used in many other sectors, and the portfolio of applications continues to diversify. Segments, such as automotive and transport or building and construction, significantly increased their relative share in 2019.

With a view to regional capacity development, Asia remains a major production hub with over 45% of bioplastics currently being produced there. Presently, one-fifth of the production capacity is located in Europe. This share is predicted to grow to up to 30% by 2024.

One criticism of plant-based bioplastics such as sugarcane and corn has always been the land needed to grow the renewable feedstock, which the data notes is estimated to be 1.7 million acres in 2019. This, however, accounts for only around 0.02% of the global agricultural area of 12 billion acres. Despite the market growth predicted in the next five years, the land use share for bioplastics will remain at only around 0.02%.

“The data shows once more that there is no competition between renewable feedstock for food and feed, and the use for bioplastics,” says Francois de Bie, Chairman of European Bioplastics. “Ninety-four percent of all arable land is used for pasture, feed, and food.”

The market data update 2019 was compiled in cooperation with the research institute nova-Institute (Hürth, Germany).  The data for the global production capacities of bioplastics is based on the market study, “Bio-based Building Blocks and Polymers,” by the nova-Institute (2020).