The Coca-Cola Company goes commercial with its new plant-based PET bottle, containing up to 30% renewable resources, with a goal of producing 2 billion bottles by year-end 2010. 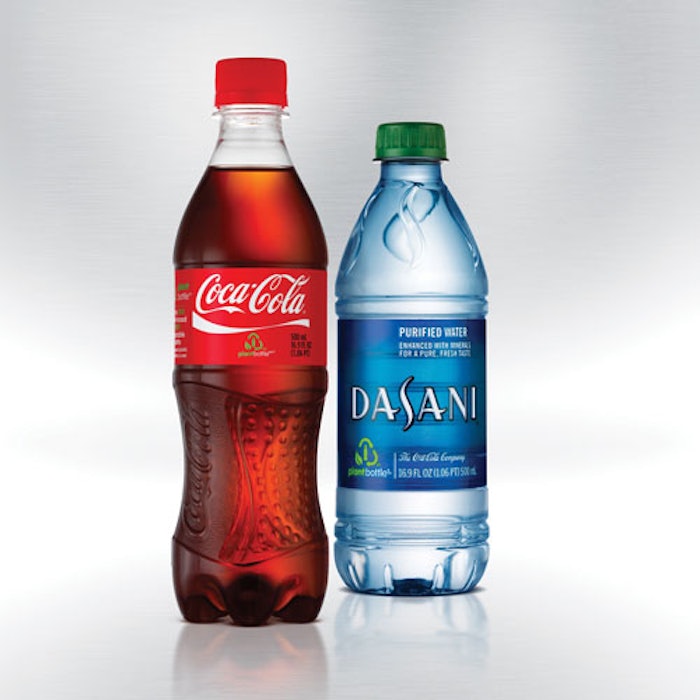 The Coca-Cola Company has announced that beverages in its PlantBottle™ packaging are beginning to arrive on store shelves in select markets throughout the world. The company says the debut of the bottle initiates its journey toward a goal of producing 2 billion of the special PET plastic bottles by the end of 2010.

PlantBottle PET plastic bottles are made partially from plants, which reduces the company's dependence on a nonrenewable resource—petroleum. Other benefits, according to Coca-Cola, are that it is 100% recyclable, and preliminary research indicates that, from the growing of the plant materials through to the production of the resin, the carbon footprint for the PlantBottle is smaller than bottles made with traditional PET.

"Today, we are taking a major step along our sustainable packaging journey as The Coca-Cola Company becomes the first-to-market with a recyclable PET plastic bottle made partially from plants," says Muhtar Kent, chairman and CEO, The Coca-Cola Company. "From Coke brands in Copenhagen to Dasani water in the Western United States, we are starting to roll out the first generation of the bottle of the future."

Throughout Denmark, Coca-Cola, Coca-Cola Light, and Coca-Cola Zero in 500-mL and 2-L sizes are now available in the PlantBottle packaging. In December, a variety of products, including Coca-Cola, Sprite, Fresca, and Dasani, will be offered in Western Canada in the PlantBottle, which will also be used for products at the Vancouver 2010 Winter Olympic Games. And for select markets in the Western U.S., including Seattle, San Francisco, and Los Angeles, PlantBottle packaging will be used for sparkling brands and Dasani in several sizes, starting in January. Future launches are being planned in other markets, including Brazil, Japan, and Mexico, and for China's Shanghai Expo in 2010.

PlantBottle samples also will be featured at the company's investor event, "A Growing World of Refreshment, A 2020 Vision," which begins later today [Nov. 16] in Atlanta.

"The PlantBottle is precisely the kind of innovation that demonstrates how businesses can help address climate change and reduce stress on our precious natural resources," says Kate Krebs, director of Sustainable Resources for The Climate Group. "While Coca-Cola is just beginning to bring its plant-based PET plastic into the mix, this is a revolutionary solution that has the potential for long-term, meaningful benefits."

PlantBottle production process
PlantBottle packaging is currently made through a process that turns sugarcane and molasses—a byproduct of sugar production—into a key component for PET plastic. The sugarcane being used comes from predominantly rain-fed crops processed into ethanol, not refined sugar. Ultimately, the company's goal is to use nonfood, plant-based waste, such as wood chips or wheat stalks, to produce recyclable PET plastic bottles.

"Coca-Cola is currently sourcing raw materials for its PlantBottle from suppliers in Brazil, where third parties have verified that best-in-class agricultural practices are the norm,'' says Dr. Jason Clay, senior vice president of Market Transformation for World Wildlife Fund. "Preserving natural resources through sustainable agriculture is essential for businesses like Coca-Cola as they search for ways to alleviate environmental challenges."

While the bio-based component can account for up to 30% of the resulting PET plastic in PlantBottle packaging, the percentage varies for bottles that also contain recycled PET. For example, Denmark uses recycled content in its PlantBottle packaging. The combined plant-based and recycled content makes up 65% of the material, Coca-Cola says, with 50% coming from recycled material, and 15% from plant-based material.

For the PlantBottle packaging in the U.S. and Canada, up to 30% of the content in the PET plastic comes from plants.

"While the PlantBottle introduction and market launch put The Coca-Cola Company on the forefront of bio-based packaging innovation, we are continuing to strive to make an even better bottle," says Scott Vitters, director of Sustainable Packaging, The Coca-Cola Company. "Our vision is to continue innovating to achieve a bottle that is made with 100-percent plant waste material while remaining completely recyclable."

As robot usage increases, package design should take into mind ease-of-use for this technology, in all points of a product’s life cycle.
Kim Overstreet
Nov 18th, 2021
More in Package Design