The 2017 event breaks records for attendance, exhibitors, and exhibit space. 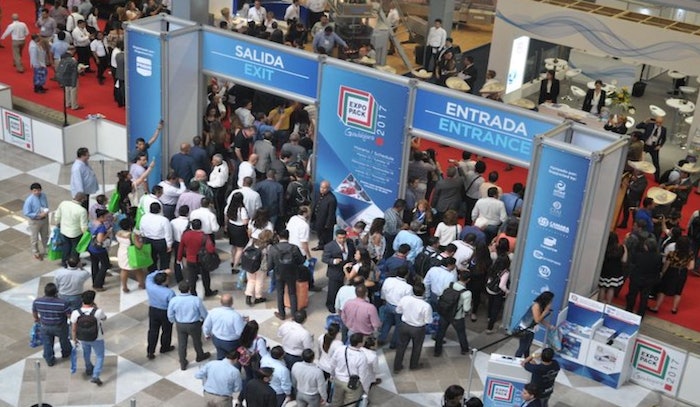 EXPO PACK Guadalajara continued its maturation from a regional show in Western Mexico to a truly international event, welcoming nearly 16,000 attendees to the Expo Guadalajara June 13–15. Just as impressive as the 45 percent rise in attendance from 2015 was the increase in diversity with over 40 percent traveling from outside the immediate Jalisco area, including international attendance from Guatemala, Cuba, Costa Rica, Colombia, El Salvador, Honduras, Ecuador, Argentina, Brazil, Chile and Peru.

“This year’s event confirmed our belief that like EXPO PACK México in the even years, EXPO PACK Guadalajara has taken the mantle of the leading packaging and processing event in Latin America in the odd numbered years,” says Jim Pittas, COO of show producer PMMI, The Association for Packaging and Processing Technologies. “It exceeded our expectations in attendance, exhibitors and total event floor space.”

All told more than 21,000 packaging and processing professionals from 16 countries descended among 757 booths spread across 140,000 net square feet of exhibit space—triple the size of 2015. International pavilions included Brazil, Canada, China, France, Italy, Spain and the United States. PMMI was represented by 160 member exhibitors, with more than half —82— in the PMMI pavilion.

EXPO PACK General Director Gerardo Barajas opened the show with high expectations based on research from the Mexican Packaging Association (AMEE) that indicated steady growth in the Mexican packaging and processing market. The total production of the Mexican packaging industry increased 4.6 percent over the previous year and is expected to grow 5 percent by the end of 2017. This data served as the impetus for many educational opportunities for attendees including a standing-room only conference session from MILA Managing Director Luis Doménech that outlined the causes of the current stability in the Mexican market and presented a series of strategies for success. Doménech described the market as ripe for investment with multinational consumer packaged goods companies, an exploding beverage sector and an increasing desire for automation driving growth.

After PACK EXPO Las Vegas 2021 led the way in bringing the industry together, PACK EXPO East returns to Philadelphia looking to build off of its largest show ever in 2020.
Sean Riley
Dec 14th, 2021

Packaging and processing community ready to reconvene in Las Vegas for first time in over 18 months.
Sep 21st, 2021
More in PMMI news