Cargo Cover Science: Is It All About the “R”?

We typically see a high emphasis placed on the R-value in temperature-controlled shipping materials. But does a higher R-value always equate with better protection in the real world? 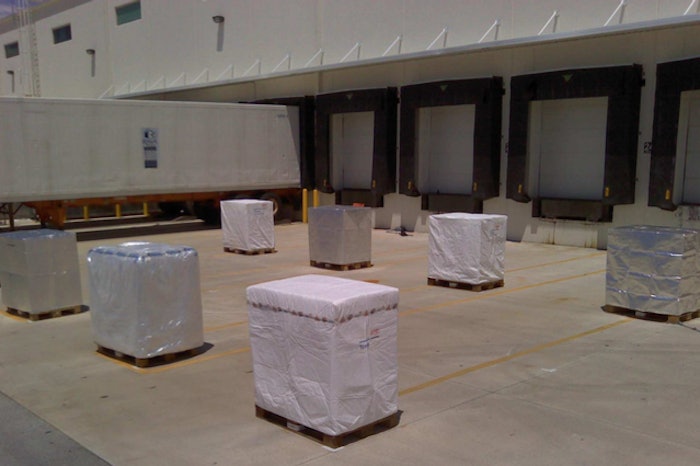 Thermal chamber results are important but you may have to look at solar exposure as well.

It’s no secret that handoffs are a risky part of a cold chain shipment, particularly when they involve outdoor handling, such as on the tarmac. A team at DuPont Protection Solutions set out to analyze heating and thermal protection during cold-chain breaks, and test whether cargo cover properties resulted in the expected performance.

R-values are used to compare the insulation properties of materials, and are simply the material thickness divided by its thermal conductivity, in units of m2K/W. In the case of multi-layer structures, the R-values of the individual components can be added up to give the total R-value of the whole structure. Though these values are a useful comparison tool, Brabbs was clear in his message: “They’re important, but they’re not the whole story.”

As a side note, Brabbs offered some words of caution when looking at R-values. You must be aware of the units when comparing R-values, as some are quoted in m2W/K per centimeter (or per inch) for the material, rather than in the standard units for a specific insulation layer of a given thickness. Additionally many R-value test methods originating from the construction industry have an air gap built in, as there would be in a wall or roof cavity. If an R-value test includes an air gap, you have to deduct the contribution of that air gap from the quoted R-value, since you will not have a significant air gap with a cargo cover. The worst case is zero air gap.

Brabbs discussed the two experiments they ran at DuPont to compare the effect of covers on controlled room temperature (CRT) shipments exposed to high temperatures with and without solar exposure. They tested 6 different cargo covers of varying R-value (measured according to ASTM C518 with no air gap) and reflectivity (measured between 400 and 1050 nm wavelength) on identical pallets of low thermal mass preconditioned to 20°C, using high temperatures from either an environmental chamber or from strong solar (Florida) exposure. In the outdoor experiment, pallets were widely spaced to avoid shadowing of neighboring cargo and the team monitored several environmental conditions, including wind, solar radiation and temperature.

In the 40°C environmental chamber, the experiment showed performance of the cargo covers largely correlated with measured R-value. (A thick thermal blanket and high R-value Tyvek® Xtreme™ W50 performed best, but the thermal blanket also retained heat for longer when the cargo was returned to a cold store.)

But in the outdoor 34 - 36°C experiment, where solar radiation played more of a role, the order of performance was quite different: more reflective covers performed best. The thick thermal blanket with the highest R-value, but relatively low reflectivity, performed poorly in comparison to more reflective covers, and still had a longer recovery time. A thin, highly reflective Tyvek® Solar™ W20 cover with a very low R-value did fairly well, while Tyvek® Xtreme™ W50 (high R-value, high reflectivity) provided the lowest peak temperature and fastest recovery, which is important to minimize the use of stability budget in case of an excursion.

“You would expect that the performance is best when you have high reflectivity in cases where cargo is waiting outside,” said Brabbs. The hypothesis was confirmed: once cargo is out in sunlight, cover reflectivity becomes an important factor in keeping temperatures low.

Brabbs noted that if product literature mentions reflectivity, you should also look at the wavelength range over which this is measured. He explained that the team looked at many metallized covers some of which claim up to 95% reflectivity, but they found that such figures do not accurately characterize their performance over a wide spectral range. Most of the energy in solar radiation is in the visible and near infrared (approximately 400 nm to 1000 nm) region and so it is high reflectivity over this range that is most effective under solar exposure conditions.

Brabbs offered the following words of advice for those looking into cargo covers: