Most Americans associate counterfeiting with consumer goods rather than meds. Sanofi introduces three levels of package protection to battle counterfeits. 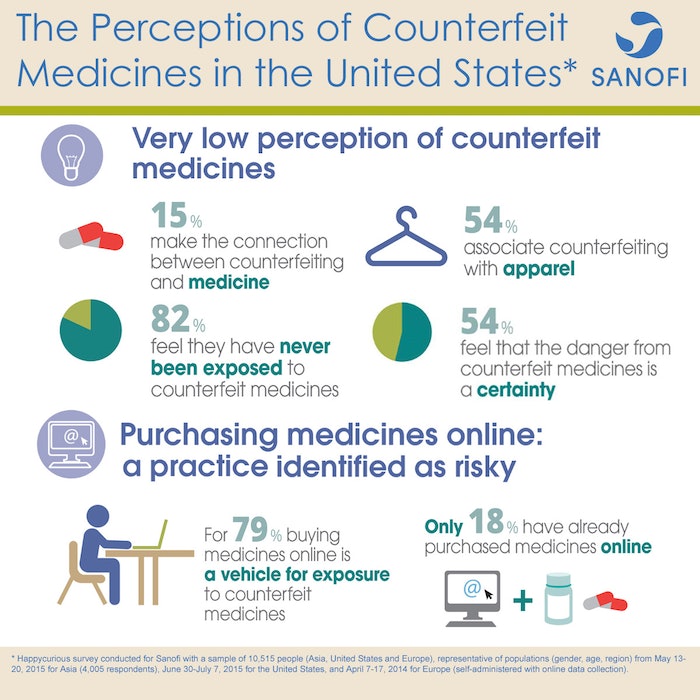 Most Americans associate counterfeiting with consumer goods rather than meds. Sanofi introduces three levels of package protection to battle counterfeits.

The findings show that only 12% of Americans feel that they have enough information on counterfeit medicines, and in most cases, are more likely to associate counterfeiting with consumer goods rather than medicines.

“Counterfeit medicines are a crime against public health and a growing global crisis that affects all types of medical products and any therapeutic indication. They can cause ineffective treatment, sometimes serious side effects, and in the worst cases, the patient's death," says Geoffroy Bessaud, Associate Vice President Anti-Counterfeit Coordination, Sanofi. "The findings of this study demonstrate that the burden is still too poorly perceived by populations as a whole, and underline the need for the public at large to be better informed about the risks involved."

Among the study’s findings:

• Only 15% of American respondents made the connection between counterfeiting and medicines, while 54% linked the issue more with apparel and 43% with luxury goods.

• Fifty-four percent of Americans considered that the danger from counterfeit drugs was undisputable, while 40% felt that it was potential.

• Forty-one percent of respondents said they had no information about counterfeit medicines, and only 12% felt that they had been given sufficient information.

Looking at exposure to counterfeit medicines via the Internet, Sanofi’s study noted the following:

• Eight out of every 10 Americans feel that the greatest risk of exposure to counterfeit drugs stems from the purchase of medicines online (79%).

• Sixty-two percent feel that there is also a risk when traveling abroad.

• Yet they also believe it possible that counterfeit medicines might be found in traditional retail channels in the U.S. (59%).

• Only 18% of Americans had already purchased medicines online and three-quarters were not aware of the fact that there was a risk involved (74%).

With typical foresight, 77% of all Americans travel with their own medicines, and almost 50% keep these products in their carry-on luggage whenever they fly (47%). As most of them feel that buying medicines abroad is a risky business, only 16% of U.S. travelers actually do it, and 78% of them only buy from pharmacies.

Under these conditions, 70% of Americans feel safe about buying, although this feeling of security varies according to destination: 83% when buying in Europe, but only 50% when purchases are made in Asia.

Sanofi has introduced three levels of protection for its medicines to defend the integrity and tamper-proof seal of each box, and to ensure product authentication and traceability. This level of precaution extends beyond regulatory obligations.

Sanofi set up a central coordination unit as early as 2007, assembling the internal centers of expertise that are potentially affected by fake drugs: Industrial Affairs, Safety, Medical and Regulatory Affairs, Legal, Public Affairs and Communication. This operational and territorial grid is conducive to greater responsiveness and allows the implementation of concrete actions in the fight against counterfeit medicines.

In 2008, Sanofi created the Central Anti-Counterfeiting Laboratory (LCAC), located at a pharmaceutical site in the city of Tours to analyze suspected counterfeit products. Approximately 4,000 samples are sent to the laboratory each year from all over the world, forwarded by health authorities or seized by police or customs authorities.

The company is also developing platforms designed to alert the general public by way of a website that aims to provide information and advice to raise vigilance over fake medicines and a mobile app for travelers called "travel tips."

Sanofi actively cooperates with national and international authorities to identify illicit platforms and to help take down illegal networks that threaten public health and safety with counterfeit medicines.

• Sixty-two percent of tablets purchased on the Internet in 2011 were apparently counterfeit medicines. (3)

• Ninety-six percent of online sales sites for medicines are purportedly illegal and more than 50% of medicines purchased from websites that conceal their physical address are probably counterfeit drugs.(4)

• Each year, approximately 100,000 to one million deaths occur due to counterfeit medicines.(5)

• The estimated figure is 10% of the pharmaceutical market worldwide around $200 billion.((6))