Respondents identify packing and loading as having the least efficient workflow. Solutions may include new technology such as faster labelers and bar-code scanners. 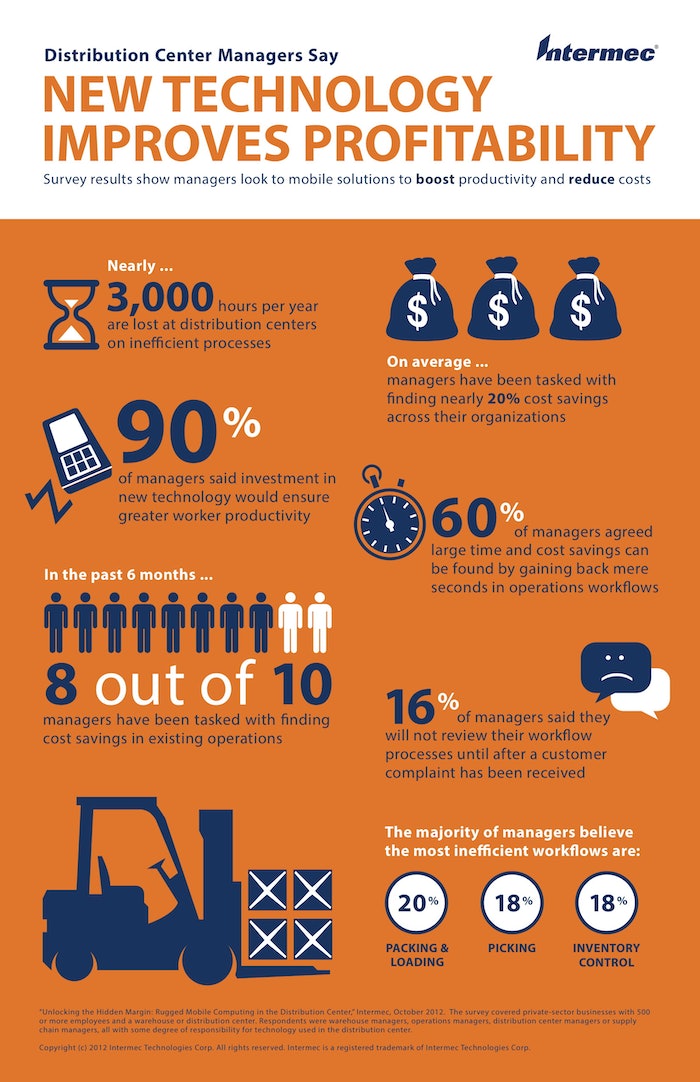 The warehouse and distribution center is under increasing pressure to reduce cost and increase margins. Recent Intermec research carried out by Vanson Bourne reveals that in the last six months alone, nearly eight out of 10 (79%) warehouse managers have been tasked with finding an average 19% cost saving from existing operations. Despite this mounting pressure to cut costs and the need to find efficiency gains in every process, managers admit to losing time and money through known inefficient workflows.

The survey base of 250 supply chain, warehouse, and distribution managers stated that, over an eight-hour shift, each worker loses an average of 15 minutes of productivity in an inefficient process. For a small to medium-sized warehouse with 50 workers, this quickly adds up to nearly 3,000 hours a year, and could be a significantly higher number in larger organizations. (The research revealed that the average worker loses an average of more than 15 min/day, or 58 hr/yr, or 8 working days/yr. Assuming a warehouse with a minimum of 50 warehouse workers, this equates to 2, 899 hours a year.)

Although most managers have been tasked with finding cost savings, close to one in three (30%) have not conducted a review of workflow processes in their distribution center within the past year. This is the first step in identifying areas for improvement.

This belief is born from the data produced by companies that have recently conducted a workflow process review, who say that inventory control (53%) and picking (47%) are the two areas where cost savings could most easily be achieved.

Strong resistance to change
Perhaps surprising, the research shows that in companies that are yet to take action to improve workflow productivity, there are high levels of resistance to the idea of carrying out a full review.

Managers who have not held a review in the past year, say that only compliance (28%) or poor performance (27%) would prompt them to do so today. The latter point is in stark contrast to those companies that have recently conducted a review, and implemented process improvements as a result, who say that they are mostly motivated by compliance issues (26%) or continuous improvement programs (22%) and rate poor performance as a very low (9%) driver for their action.

Most shocking of all in a world in which every customer’s business is hard won, and even harder kept, are the nearly one in five companies (16%) who say they will not review their workflow processes until after a customer complaint has been received.

Meeting cost targets: every second counts
Nearly all respondents appear to agree on the key to achieving the goal of greater efficiency. When asked how to improve performance across the warehouse and distribution center, the overwhelming majority of managers (89%) said they believed investment in new technology would enable them to claw back their lost time and ensure greater worker productivity.

There is also increased awareness of the value that shaving just seconds off workflow processes can bring. Nearly two-thirds (60%) agree that "large time and cost savings opportunities can be found in gaining back mere seconds in operations workflows.” Examples of how to achieve this include having workers take fewer steps, investing in faster label printing and quicker bar-code label scanning, and eliminating battery changes mid-shift.

Says Bruce Stubbs, Intermec industry marketing director for Distribution Center Operations, “Warehouse managers are faced with significant cost saving challenges, which means they can’t afford to let such levels of time wastage continue. Businesses should be looking at every workflow in detail, on a regular basis, to claim back the minutes and seconds they need to achieve these savings. As this research shows, reviewing their technology infrastructure may be the perfect place to start.”