Italian chocolate manufacturer Perugina has exported chocolate-covered cherries to the U.S. at Christmas time for several years now. But this year for the first time the Christmas tree-shaped package that holds the foil-wrapped delicacies comes with an added component: a polyvinyl chloride band. 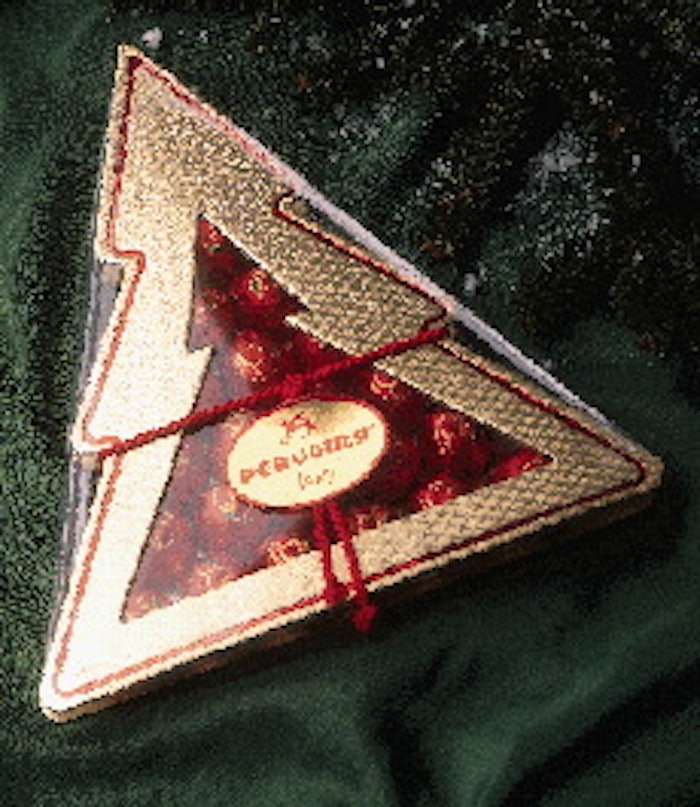 "Perugina wanted the package to have a more prominent tamper-evident feature," says Morton Simkins. He's president of Simkins Corp. (Philadelphia, PA), the contract packager that packs trays and bands the candies for Perugina. While there hadn't been problems with pilfering in the past, consumers today are super-conscious when it comes to tamper-evidence, adds Simkins.

Simkins personnel load 21 individually foil-wrapped chocolates into a triangular-shaped PVC tray, which is glued to a decorative lamination of 75-pt newsboard and embossed foil. A PVC top with another paperboard/foil structure glued to it is friction-fit into the tray holding the candy. A cord ties the package together. The 2-mil PVC band, made by Integrity Seal (Wilkes-Barre, PA), is hand-applied along the three edges of the triangular pack. The band is then shrunk in a tunnel to fit snugly around the holiday package. While Simkins wouldn't reveal volumes, he says the package "has been very successful."