The American Robotic Industries Association (RIA) announced that Esben Østergaard is the recipient of the Engelberger Robotics Award 2018. 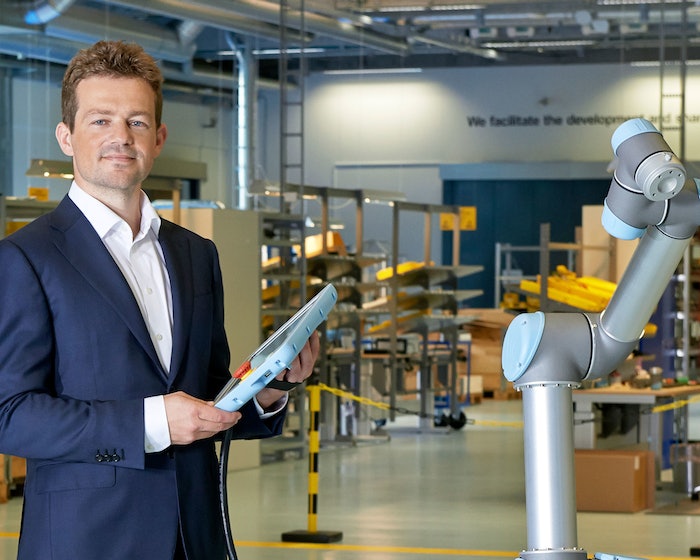 Østergaard spearheads the development of Universal Robots’ collaborative robot arms representing one of the most significant technology breakthroughs coming out of the robotics community in decades.

President of RIA, Jeff Burnstein, calls the Universal Robots CTO a visionary in defining a new category of robotics. “His work in the field of collaborative robot applications has allowed robots to enter previously unthinkable sectors in just about every industry,” says Burnstein.“Esben Østergaard’s emphasis on robots that work side-by-side with people and are easy to use has created enormous interest among many small and medium sized companies who never even considered robots before. In a world that is increasingly characterized by people and robots working together, Esben’s pioneering technology advances play a pivotal role.”

Universal Robots’ 2008 launch of the world’s first commercially viable robot able to operate safely outside enclosures alongside people came at great financial risks in a market unaccustomed to human-robot collaboration. Yet Esben Østergaard and his team prevailed by offering the industry a robot that was not only safe to work with but also lightweight, easy to use and flexible. These accomplishments have placed Universal Robots as the unrivaled market leader of collaborative robots – also referred to as “cobots” – with a current 58% share of all cobots sold worldwide, posting a rapid 72% growth in 2017.

“I’m deeply honored to win the award named after Joseph Engelberger, who revolutionized industrial manufacturing with robotics,” says Esben Østergaard. “Engelberger’s view that a robot should be able to handle a range of tasks in a factory aligns with Universal Robots’ core mission, and I’m a great admirer of his work.”

Esben Østergaard leads a team of developers that became the first to launch user-friendly, yet sophisticated, 3D robot programming via an intuitive tablet interface. This has enabled users with no previous programming experience to quickly set up and operate the UR robots.

He also developed the robot’s force and safety control features, which ensure that if the robot collides with a person, the robot automatically stops operating and does not cause bodily harm, adhering to the current safety requirements on force and torque limitations. These features have eliminated the need for safety guarding in a vast majority of the UR robot applications currently installed and remain a trailblazer for the “collaborative robot” concept.

Safety, however, according to Esben Østergaard, is just “the cost of entry” in the cobot market. He continues to propel UR’s frontrunner position by constantly raising the bar for what the term “collaborative” entails; the label not only means humans can collaborate directly with the robots potentially with no safety guarding between them. The term also addresses the ease of use; a robot is not truly collaborative if it’s not affordable and easy to work with.

“We want to place control of factory automation back into the hands of operators, instead of replacing people we want to give them a tool to do their work more efficiently,” says the Engelberger award winner. “We want to remove them from working like robots to becoming robot programmers and handling more value-added tasks. Doing this will perhaps be the best long-term result derived from leveraging collaborative robots,” explains Esben Østergaard calling this new era, the 5th industrial revolution.

“This redeployment of human creativity interspersed with the robot’s repeatability addresses the market evolvement and customer requirements demanding a high degree of product individualization. It’s qualitative change both in the products made and for the people making them.”