The $4.2 billion deal is expected to improve ABB access to North American industrial customers, while strengthening its position in the market for energy-efficient industrial motion products. 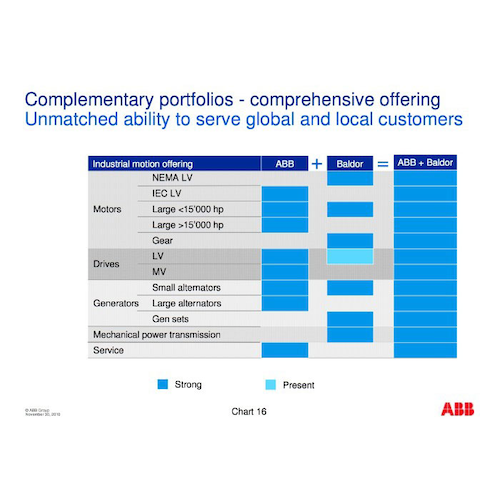 Joe Hogan, chief executive officer (CEO) of ABB Ltd., thinks that his company’s $4.2 billion acquisition of Baldor Electric Co., announced on Nov. 30, has a chance to do just that. “I don’t think there’s ever been two companies coming together that have such expertise and capabilities in motors and drives at one time,” Hogan said during a conference call for analysts, investors and media.

“Remember that we (ABB) have the world’s largest low-voltage drives business, and John (McFarland, Baldor Board chairman and CEO) and his team have the most successful NEMA industrial motors business,” Hogan continued. Such a choice combining two leading brands for motors and drives from a single vendor is “a different opportunity than what’s been presented in the past,” he contended. Hogan noted too, however, that the combined company will “put together anything that makes sense for customers. If they feel that they want to mix and match, we’ll mix and match.”

Hogan confirmed during the conference call that ABB plans to maintain the Baldor brand name. “Baldor has a great brand, and you won’t see us get in the way of the Baldor brand at all,” he said. “We want to make sure that it’s enhanced as much as possible.” ABB also said that it plans to locate its motor and generator business headquarters for North America in Fort Smith, Ark., where Baldor is headquartered.

In a Nov. 30 press release announcing the deal, ABB, the Zurich, Switzerland-based power and automation technology supplier said that it has reached an agreement with Baldor, a major supplier of industrial motors, by which ABB will acquire Baldor in an all-cash transaction valued at approximately $4.2 billion, including $1.1 billion of net debt.

Under the terms of the definitive agreement, which has been unanimously approved by both companies’ Boards of Directors, ABB will commence a tender offer to purchase all of Baldor’s outstanding shares for $63.50 per share in cash. The transaction represents a 41 percent premium to Baldor’s closing stock price on Nov. 29, 2010. The Board of Directors of Baldor will recommend that Baldor shareholders tender their shares in the tender offer. The deal is expected to close in the first quarter of 2011.

ABB noted in its release that the transaction closes a gap in its automation portfolio in North America by adding Baldor’s NEMA motors product line (for National Electrical Manufacturers Association) and positions the company as a market leader for industrial motors, including high-efficiency motors. Baldor also adds a growing and profitable mechanical power transmission business to ABB’s portfolio.

The company expects the transaction to substantially improve access to the industrial customer base in North America, opening opportunities for ABB’s wider portfolio, including energy-efficient drives and complementary motors. This move comes at a time when regulatory changes in the United States and other parts of the world will accelerate demand for energy-efficient industrial motion products. ABB further expects the acquisition to strengthen its position as a leading supplier of industrial motion solutions, and will also enable it to tap the potential in North America for rail and wind investments, both of which are expected to grow rapidly in coming years.

“Baldor is a great company with an extremely strong brand in the world’s largest industrial market,” ABB CEO Hogan. “Baldor’s product range and regional scope are highly complementary to ours and give both companies significant opportunities to deliver greater value to our customers.”

John McFarland, chairman of the Board and CEO of Baldor, commented: “Our Board of Directors believes this transaction is in the best interest of our shareholders, our employees and our customers. It demonstrates the value our employees have created and the strength of our brand and products in the global motors industry. We are excited about the opportunity to join ABB’s worldwide family as we have always respected ABB. We are very pleased that ABB will locate its motor and generator business headquarters for North America in Fort Smith, and we are confident that the combined global platform will be well positioned to capitalize on meaningful growth opportunities in the future.”

McFarland will stay with the combined business to support a successful integration. And he agrees with Hogan’s comment that the Baldor acquisition by ABB could lead to more frequent selection of single-vendor motor-drive combinations by U.S. manufacturers. Baldor customers today purchase about $500 million worth of drives per year. “I’d say that the drives product line that we currently have is pretty limited compared to what ABB has, and it’s especially limited in the large, expensive drives that we often have an opportunity to quote, but don’t have a product to quote,” McFarland observed during the conference call with editors and analysts. “We sell lots of medium-voltage motors. They’re often used with someone else’s medium-voltage drive (because) we don’t have a product. We’re excited about having a product in the future.”

“ABB is well known in the marketplace for premium, innovative and advanced products. We have respected them as both a market participant and a value-added supplier for many years,” said Ron Tucker, Baldor’s current President and chief operating officer (COO), and CEO designate. Tucker will run Baldor, including the mechanical power transmission products business and ABB’s motor and generator business in North America, after the transaction is completed.

“ABB and Baldor will be able to offer our North American and global customers an unparalleled range of high-efficiency industrial products and services to help them meet their new demands,” said Ulrich Spiesshofer, Executive Committee member responsible for ABB’s Discrete Automation and Motion division, into which Baldor’s business will be integrated alongside the existing Motors and Generators business. “We expect to achieve over $200 million in annual synergies by 2015, consisting of more than $100 million annual cost synergies and at least the same global revenue synergies. We estimate two-thirds of these synergies will be realized by 2013. We intend to build on Baldor’s excellent North American position to sell energy efficient drives, larger motors and generators. Together, we will accelerate the expansion of Baldor’s mechanical power transmission product portfolio into the global process automation market using ABB’s strong channels in this sector.”

During the conference call with editors and analysts, Hogan reiterated the importance of increasing penetration in discrete manufacturing markets in North America. To that end, Baldor’s network of 35 representatives, 400 field sales people and 4,000 distributors is expected to boost ABB’s presence and sales penetration for motors and drives. ABB expects synergies from the combination of companies to amount to $200 million by 2015. Global sourcing alone is expected to amount to $75 million, while cross selling products is expected to increase revenue synergies by $65 million, adding up to about 70 percent of total synergies. Combining product lines fills ABB’s offering out into a complete motor and drive offering, according to Hogan.

Under the terms of the merger agreement, the transaction is structured as a cash tender offer to be followed as soon as possible by a merger. The tender offer is expected to commence in December and is subject to customary terms and conditions, including the tender of at least two-thirds of Baldor's shares on a fully diluted basis, and regulatory clearance. 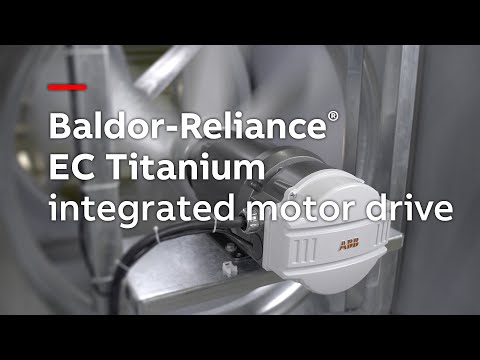 A crucial component of automation advancement, yet one that is lacking at most manufacturers, is the deployment of IIoT connectivity across an entire enterprise, including key areas such as receiving, warehousing, and shipping.
Kim Overstreet
Sep 11th, 2020
More in Home

One of the first craft brewers in New England, Harpoon Brewery aims to spear new business while distinguishing itself in the crowded craft category with a new package design that leverages iconic assets.
Anne Marie Mohan
Sep 7th, 2020

Limited-edition Vote 2020 labels on bottles of Jones Soda feature voting-themed graphics and copy along with a QR code that allows consumers to register to vote from their smartphones.
Anne Marie Mohan
Sep 3rd, 2020

Transforming large, rigid containers into convenient, at-home dispensers, this closure is differentiating feature for islanders seeking to stock up on water during pandemics and hurricanes.
Matt Reynolds
Sep 3rd, 2020

Contemporary new graphics that focus on the unique taste of milk-based nutrition brand Nurishment along with a new bottle format are designed to appeal to larger consumer base.
Anne Marie Mohan
Sep 2nd, 2020

A new report from UK packaging consultancy, ThePackHub, provides analysis and insight from a global perspective. The review includes a summary of more than 140 of the latest refillable and reusable packaging innovations from around the world.
Sep 2nd, 2020

Convenience and Flavor are the Focus of new Guacamole Package

A switch from a tray to a festive bowl that can go from fridge to table along with new graphics that highlight the real ingredients of Wholly Guacamole’s Hass avocado dips result in sales that surpass expectations.
Anne Marie Mohan
Sep 1st, 2020