In one final look at the recently concluded Ipack Ima 2018, we review a newly developed paper-based substrate and a high-speed system for block-bottom bags of short-goods pasta.

The new paper-based material should appeal to brand owners seeking flow wrap material that is sourced from renewable resources rather than from petroleum. Leading the development of this new material was machine builder Cavanna, a maker of flow wrappers as well as a range of other packaging systems. But key contributions came from Sacchital Group and Taghleef. From Sacchital comes Natura Paper. Specific details on just what Natura is were not part of the promotional materials handed out at Sacchital’s Ipack Ima booth. We were assured that Natura is FSC-sourced, airtight, and offers high-quality printing. We’re also told that it’s a range of packaging materials that are recyclable according to the Aticelca Protocol. And we’re told that Sacchital’s production process guarantees a high degree of recyclability, thanks to the correct ratios between paper, film, and adhesives. Adhesive-laminated to this layer of Natura Paper is a layer of Taghleef’s PLA (polylactic acid), which brings an important heat-seal element without getting in the way of compostability. Shown here is a photo of a finished flow wrap pack in front of the Cavanna machine on which it was produced.

Elsewhere at Ipack Ima, Germany’s Rovema introduced a twin-bagger system capable of producing brick-pack style bags of short-goods pasta, for example, at 160/min. Ample signage plus multiple filled bags around the booth advertised the fact that Italian pasta maker La Molisana will become the first to put the machine into commercial production. According to Rovema, companies like Molisana have increased their capabilities where making pasta is concerned. This has required packaging machinery builders to up their game. In addition to having side-by-side vf/f/s baggers, the Rovema system had dual heat-sealers, dual top-folders, and dual labelers for application of the fold-down tape that gets applied to the bag tops. These pressure-sensitive labelers were from Herma. Also making a big contribution was Bosch-Rexroth, whose servo motors and overall controls components permit this fast and sophisticated machine to operate as it does. 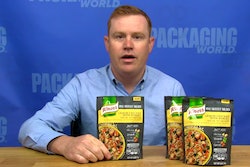 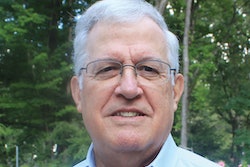 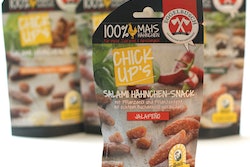