Predictably enough, flashes of Industry 4.0 were in evidence at drupa 2016.

From AVT, for example, the cloud-based ICenter is a next-generation solution for quality control automation and production performance insights. With the ICenter platform, printers can now offer brand owners around the globe consistent product quality as well as production reports showcasing these heightened quality standards. Comexi, meanwhile, introduced a smart factory concept called Comexi Cloud, a software solution that lets factories see and understand data and then process the data to facilitate optimal decision-making.

Significant systems at the Heidelberg hall were the Gallus Labelfire 340 and the Primefire 106. In beta tests today is the Gallus Labelfire 340, a high-resolution offset press for label production that integrates digital and conventional offset print as well as postpress. The digital printing unit enables cost-effective production of runs with variable data, versioning, and customization as well as short runs. The press has Fuji print heads and uses UV-cured inks. Heading for beta production in December and with a launch date scheduled for October of 2017 is the sheet-fed Primefire 106, which is described by Heidelberg as a “digital printing revolution.” Equipped with Fuji Samba™ print heads—which are said to combine the cost of Thermal Ink Jet (TIJ), the high throughput of Continuous Ink Jet (CIJ), and the operational flexibility associated with Piezo Ink Jet (PIJ)--the press is said to be especially suitable for pharma applications as well as for packaging in general. With Primefire 106, the inks are water-based, so applications in food are likely. The ink is delivered directly onto the sheets and then air dried. While the press is capable of 1.5 million sheets per month, it still has the digital flexibility that will let converters use it for small runs or prototyping.

In full collaboration mode at drupa 2016 were Dow and Nordmeccanica SpA. They launched a “revolutionary” lamination technology using both adhesive and machinery hardware advancements (see photo). Dow, making its first appearance as a drupa exhibitor, provided the SYMBIEX™ Solventless Adhesives, an ultrafast-curing adhesive technology, while Nordmeccanica pitched in with its Duplex SL One Shot™ lamination line. Until this technology emerged, the adhesive that was used to bind substrates together in an adhesive lamination usually consisted of two components blended and then applied by roller as a coating. As the two substrates come together at a nip point, they’re joined together as one. Among the downsides to this method is that once the two components react, they tend to adhere to the machinery and cause clean up and maintenance problems. More important, when conventional lamination takes place, slitting can’t be done for anywhere from 8 to 24 hours. Thanks to this fast-curing approach, slitting can be done just 90 minutes after lamination. Other benefits include

What would a drupa be without news from Landa? For 2016 the news—or at least part of the news--revolved around Nano-Metallography®. Like the other technologies under the Landa tent, this one relies on the manipulation of materials on an atomic, molecular, and supra-molecular scale. It’s designed to replace costly, inefficient processes used today, including foil stamping and metallized substrates. According to Landa, 1kg of Landa NanoFlake™ takes the place of 3,000 kg of waste foil. Landa Nano-Metallography technology also eliminates the need for a die and lengthy set-up times. So this process, says Landa, enables the production of metallized print at a fraction of the cost of foil printing. The Landa Metallography Modules are easily integrated inline into conventional print processes, including narrow web flexo, sheetfed offset, wide web flexo, and web-offset printing presses. At Landa’s drupa demonstration, the narrow web flexo press used was an XFlex X6 from Omet (www.printing.omet.com). The Metallography Modules create a monolayer of Landa NanoFlake™ metal on a donor roller while a trigger image is conventionally and simultaneously printed onto the substrate. The donor roll transfers the metal to the trigger image, using only the amount of metal required to create the metallic image. The result is a wide range of high impact metallic effects, using a minimum amount of metal. And all of this with zero waste, as the donor roll is replenished with Landa NanoFlake™ metal only in the areas of previous transfer.

drupa 2016 runs through June 10. The next drupa will be held in May of 2019, as show producer Messe Dusseldorf  has elected to move to a three-year cycle. 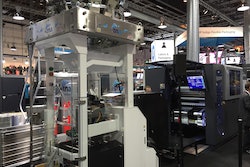 The first ever ‘packaging drupa’ 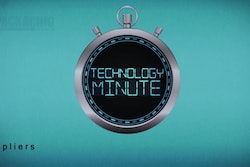 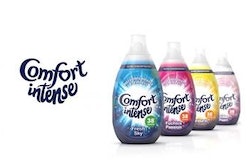 How to control shrink distortion