Coca-Cola, PepsiCo, Nestlé Waters among participating companies that will face packaging and manufacturing challenges to add calorie details to packaging. 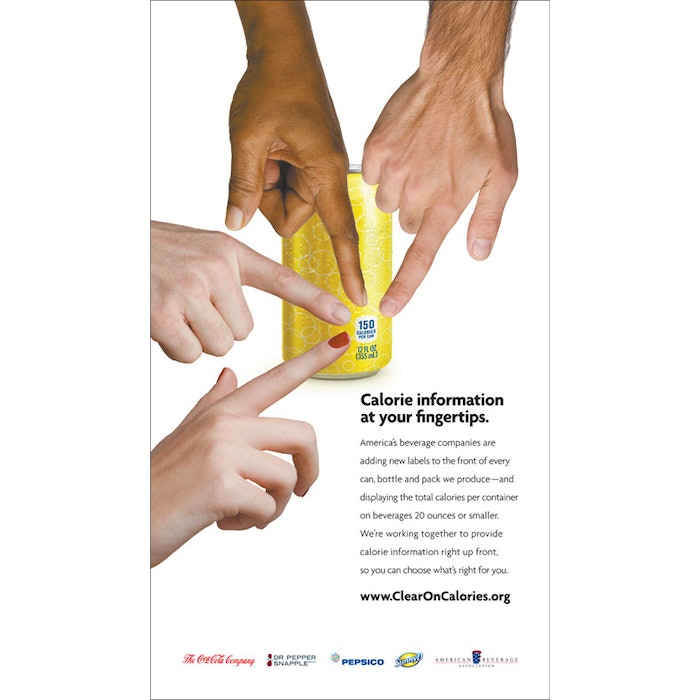 The full-page ad in the April 13 Chicago Tribune seen here immediately captured the attention of this packaging editor. The “Calorie information at your fingertips” ad points to the number of calories on the front of a beverage can and comes from the American Beverage Assn.

According to a press release from the association, “Consumers across America are seeing new calorie labels on the front of their favorite beverages, as America’s leading nonalcoholic beverage companies bring the Clear on Calories initiative to stores. The beverage industry’s voluntary commitment to make calories more visible and useful to consumers supports First Lady Michelle Obama’s efforts to help families make informed choices as part of an active, healthy lifestyle.”

Coca-Cola, PepsiCo, Dr. Pepper Snapple Group, Sunny Delight Beverages, Nestlé Waters North America, Cott Beverages, and Honest Tea are noted as participating companies in the initiative. “The Clear on Calories initiative has required a significant manufacturing, distribution, and resource commitment by the participating companies,” says the release. No doubt, be it in terms of package design, line adjustments, machinery, etc.

The American Beverage Assn. says: “America’s beverage companies are adding the new calorie labels to the front of every can, bottle, and pack they produce—and displaying the total calories per container on all beverages 20 fluid ounces or smaller. The labels began appearing on some beverages last fall and are now in stores across the nation. The companies expect to have the calorie label on the front of all of their major brands and more than half their product volume by June of this year—and on all brands and packages by early 2012 as committed.”

Displaying calories applies not only to product labeling on primary packaging, but also to company-controlled vending machines and fountain equipment.

Canada seems to be following suit, as reported recently in the Vancouver Sun.