Shipments of beverages in cans in Europe for the first half of 2001 showed 5% growth compared with a year earlier, according to Beverage Can Makers Europe. 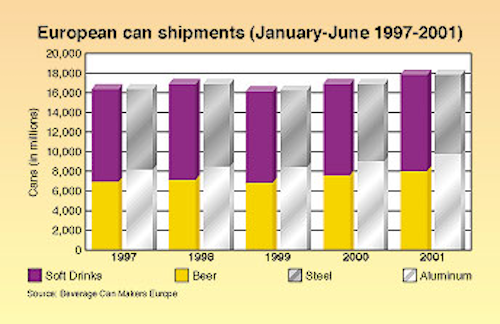 BCME is a non-profit trade organization made up of three companies that it says represent 95% of the European beverage can market: Rexam Beverage Can Europe + Asia, Crown Cork & Seal, and Schmalbach-Lubeca AG. Through June, 18 billion cans were shipped, 54% of them aluminum. BCME reports aluminum is up 9% this year; steel cans are up 2% compared to last year. Beer (6%) and soft drink (5%) markets are showing strong growth. The organization says Germany has overtaken the United Kingdom as the biggest beverage can market in Europe. BCME says worldwide two-piece beverage can shipments in 2000 reached 210 billion. The United States led the way with 114 billion, while 40 million were shipped in Asia, 35.5 billion in Europe, 14 billion in South America, and 7 billion in Africa. At its Web site, www.bcme.org, the organization provides market reports for individual countries in Europe. (JB)