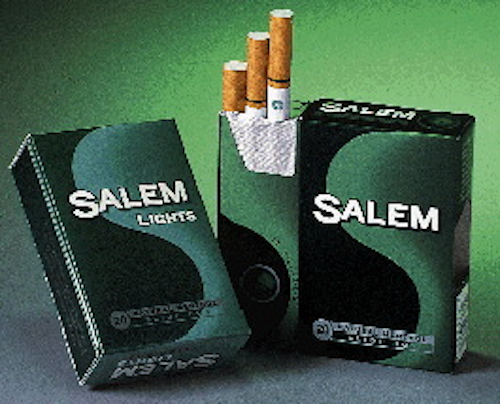 It's part of a new promotion campaign to try to reverse a steady erosion experienced by the 41-year-old brand in recent years. The new pack replaces a paper pack that RJ Reynolds calls its standard "soft pack." "The slide box is unique to RJR," Reynolds spokesperson Richard Williams tells Packaging World. It hasn't been used outside the company, says Williams, and within RJR it has only been used for a much smaller new brand that's been in test for the past year. The pack is gravure-printed in seven colors plus a lacquer coating. Several shades of green and black create a rich, upscale appearance. The company says it uses gravure for all its cigarette packaging. RJ Reynolds prints and manufactures the cartons in-house using 11-pt board from Westvaco (Richmond, VA). Although Williams confirmed the slide box represents an increase in the amount of packaging materials compared to RJ Reynolds' standard packaging, he declined to comment on costs. The selling price, $1.70 to $2.10 per pack depending on the market, will remain the same, Williams says.