Just about every year, when FDA issues its enforcement statistics, interpreters everywhere struggle with the same issue: What can one conclude from these numbers? 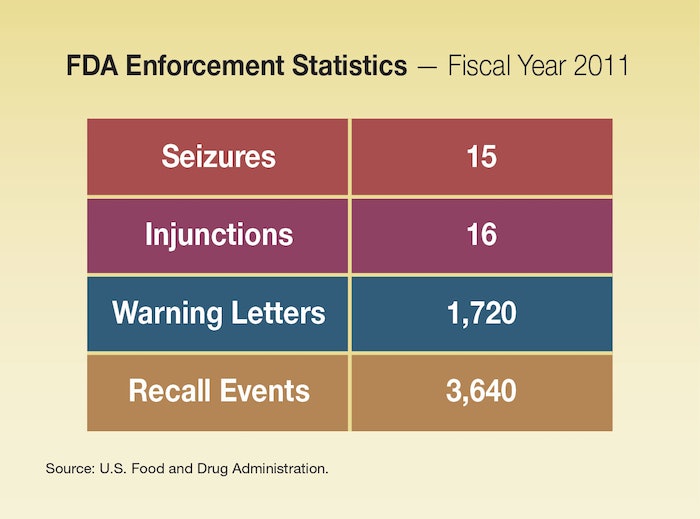 Just about every year, when the Food and Drug Administration issues its enforcement statistics, interpreters everywhere struggle with the same issue: What can one conclude from these numbers? Easy enough to look at the numbers, as we do this time for fiscal year 2011 in comparison to years previous. But determining how to read these particular tea leaves to tell industry’s fortune, that’s harder.

My own view is this: When numbers are generally up, it’s a comfortable conclusion that FDA’s getting “tougher.” Kind of. When down, less tough, kind of. Depends which numbers, and depends on why they are up or down.

Because, for example, if the numbers you are looking at are the stats for FDA’s judicial actions—seizures, injunctions, criminal prosecutions—those numbers are small by almost any measure, every year, especially in light of FDA’s huge mandate to regulate products making up about 25% of every consumer dollar. This year, there were 15 seizures and 16 injunctions. So if those numbers went up even 50% year to year, you’re still talking about only handfuls. Those numbers are small enough for one to say their ups and downs don’t send anyone in industry any particular signals at all one way or another.

No, to judge if you’re looking at a tougher or softer FDA, I contend you have to look at the number of inspections of manufacturing and distribution facilities, and the related number of Warning Letters (which commonly are preceded by inspections), as well as at specific initiatives they are undertaking, which might target your particular product or industry segment.

Inspections that lead to observations of violations, and even Warning Letters, by themselves have no teeth at all. Voluntary compliance is the central theme of how FDA works with industry, relying on industry to do the right thing even after being told something’s wrong. And most of the time, they do, if they are getting good advice. The number of recalled products, also an indicator of some blend of industry cooperation and agency pressure, didn’t change much from 2010 to 2011 (9,361 to 9,288).

And this year, the figures for the number of FDA inspections are not available.

Just like last year, in its published summary of the enforcement statistics from 2011, FDA for some reason didn’t include a raw number total or numbers broken down by product type, as they have done in the past. (For some context, they reported 15,954 inspections of all product types for fiscal 2009.) As part of a broader initiative to add transparency to information in their possession, they created new searchable databases about their various inspections, which is undeniably handy. But if those databases include totals, I am not able to find them. (Insert your joke here about computer literacy among aging columnists).

FDA was given the new responsibility to regulate tobacco a couple of years ago, and are starting to ramp up their activities using the new powers. The tobacco Warning Letters go to retailers who are alleged to have violated the law’s requirements to, for example, not sell to those under 18 and verify the age of customers.

The food-related increase is dramatic, and it coincides with the new FDA Food Safety Modernization Act of 2011, which enhanced FDA’s emphasis on food safety in a variety of ways, including increasing inspections and targeting higher-risk food operations for such inspections.

Say what you will about trends and patterns, but the most bottom of bottom lines, and the best indication for most companies of whether FDA is tougher, is the agency’s attitude toward your particular company. And on that score, it’s as true now as it always is, that it pays to be prepared and assure your compliance to avoid becoming an enforcement statistic.