The eyes have it: Snowfox Vodka bottle enhanced with cold foil

Canadian vodka brand Snowfox gets an updated label that uses cold foil to emphasize the icy blue stare of its namesake, a Canadian snow fox, along with a striking silver logo with paw print.

Piercing, ice-blue eyes: That’s the first thing you notice when looking at the new bottle label for Snowfox Vodka. Canadian brand Snowfox is a premium vodka with a hint of sweetness for the upscale market. The spirit was inspired by the purity of the Canadian arctic and its native snow fox, the face of which dominates the front of the new Snowfox Vodka label. It is cold-foil printing technology that gives the fox its arresting, ice-blue stare.

Port Royal Distillers Inc. introduced Snowfox Vodka in 2012. Recently the spirits producer sought partners to help it update the graphics for its bottle label to help increase shelf impact. The new visual identity is enhanced through the use of an over-printable cold foil, API 1000 TA from API Group, that is used for the fox’s eyes, a silver circular band that separates the fox graphic from the bottom half of the label, and the silver brand logo.

Spectrol Inc. prints the foil using a 10-color Gallus EM5 10S 20-in. flexo printing press and applies it to the front panel of the heat-shrink label. The label shows the Canadian snow fox in finely detailed close up, gazing out from above an icy blue labeled area. The cold foil produces a striking glow-in-the-dark effect, causing the electric-blue eyes of the snow fox to illuminate dramatically in low-lit areas such as nightclubs, drawing the attention of consumers.

On the lower blue area, the API foil produces an air of textured high quality by creating a doming effect on the drink’s name and by representing the second “O” in “SNOWFOX” as a paw print.

According to Pamela Wyatt-Ashcraft, API Regional Sales Manager, the advantages of API’s TA foil include its over-printability, its capacity for custom coverage, its brilliant gloss, and its compatibility with a wide range of UV adhesives. The only considerations in using the film, she says, are its shrinkability: “The 1000 TA foil has a shrinkability of 15 percent to 20 percent, so this needs to be kept in mind. Also, a large amount of foil in the neck area should be avoided.”

Explains Vishal Sahadeo, Account Manager at Spectrol, “Originally, we were using a different foil and experiencing some problems, but when we switched to the foil from API, everything clicked into place. We wanted to create an effect that wasn’t already available on the shelf, and the result, with the amazing blue eyes of the snow fox, certainly achieves this. It’s one of the most visually arresting labels we have ever produced.”

Snowfox Vodka is available in four Canadian provinces, with another four soon to be added. 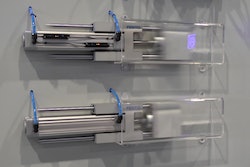 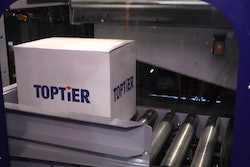