Consumers strongly prefer glass for beer and liquor. The ‘cold threshold' makes plastic ideal for water but not for beer. Soda lovers are divided on packaging choice. 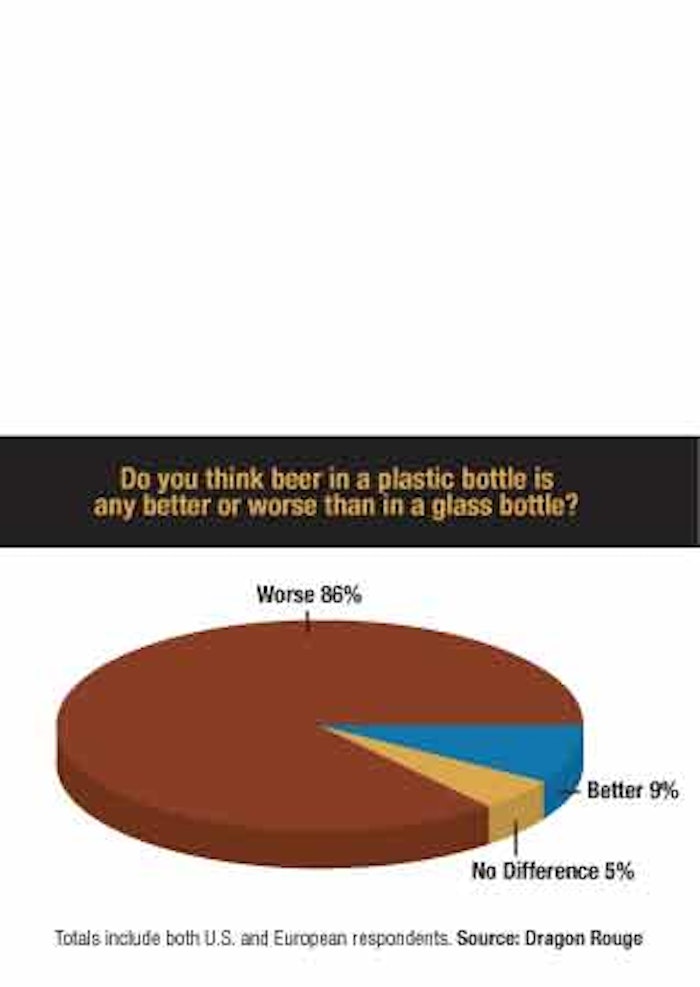 Despite attempts to market beer in plastic bottles, it naturally belongs in glass. Plastic bottles are best suited for water, but soft drinks are acceptable in either plastic or glass bottles, or aluminum cans.

So say consumers who responded to a recent electronic survey on beverage packaging. These and other top-line results from the survey indicate that consumers have some strong perceptions in associating what they believe to be the right beverage with the right package. These perceptions, in turn, can influence their purchase decisions.

Dragon Rouge (www.dragonrouge-usa.com), a New York-based global brand design firm, conducted an electronic survey of 100 consumers in the United States and Europe in May 2006. The objective was to assess perceptions and behaviors associated with beverages packaged in glass, plastic, and aluminum, and to determine consumer preferences. Key findings among U.S. consumers were the following:

• 89% opt for plastic bottles for water.

Another important finding was that 46% of the respondents said they have consumed beer in plastic bottles, mostly at sporting events. But in the opinion of 86% of the overall respondents, drinking beer from a plastic bottle is less desirable than from glass. Of the respondents who prefer glass to plastic for beer consumption, 40% believe that beer tastes better in glass bottles while 37% perceive that beer stays cold longer in glass bottles.

These findings are significant because they indicate that beer in plastic bottles has failed to catch on widely with consumers, despite plastic bottles' advantages of being shatterproof and lightweight, says Jonathan Asher, president of Dragon Rouge. Asher also notes that European consumers who responded to the survey cited recycling concerns as another negative for plastic beer bottles.

“The message for the brand manager is that if you're at a beer company interested in making a big push in plastic, you're going to have to do something to convince consumers that the benefits of plastic beer bottles go beyond being shatterproof and lighter,” Asher says.

“For the designer, if you're expanding into plastic beer bottles, you need to create a perception that says ‘colder, longer.” Asher recommends that designers consider showing this benefit through either structural design or graphic designs that connote “cold” on shrink-sleeve labels covering plastic beer bottles.

The study didn't address aluminum beer bottles, which have been making a splash on the market over the past year with festive label graphics that sell the “cold” benefit. However, they appear to be catching on in many countries. Anheuser-Bush says that strong sales of its Budweiser Select in 16-oz aluminum bottles are prompting the brewery to double its production capacity for the package by this fall.

But Asher says consumers may not be completely sold on all of the aluminum beer bottle's virtues. “Anecdotally, people are very taken with them. It's the hot, sexy thing. It certainly has the perception of cold, but there may taste issues with the aluminum.”

So if consumers perceive that beer doesn't stay cold enough in plastic, why do they overwhelmingly accept water in plastic bottles? Asher cites two reasons why. First, the “threshold of cold” is different for beer and water.

“On a hot day, you want beer really cold. But if you're drinking water on a hot day and it's just a little cold, it's going to be fine,” Asher explains. “Consumers say that there is a higher required standard of cold for beer.”

The second reason that consumers accept plastic water bottles is because it's all they know when shopping the bottled water aisle, except for glass bottles for sparkling water.

Consumers also approve of plastic bottles in spirits—under the right conditions. Some budget brands of whiskey, for example, are moving into plastic bottles in both very large sizes and in travel packs. Consumers are accepting because they believe that plastic signals a value purchase. However, they still associate premium brands of spirits with decoratively designed glass bottles.

The overall survey results noted little difference by age or sex, and the results on the whole were consistent between Americans and Europeans. However, Asher notes some exceptions. Soft drinks are consumed more often in plastic bottles in the United States, while Europeans are more likely to consume soft drinks out of glass bottles. Soft drinks are consumed about equally between the two countries in aluminum cans. Nearly half of the U.S. respondents to the survey said they have consumed beer in plastic bottles, but only a minuscule 10% of the European respondents said they had done so.