Heineken rolls out 24-oz 'keg' can

Heineken USA, White Plains, NY, recently introduced its Heineken lager beer in the United States in a 24-oz can that resembles a keg. 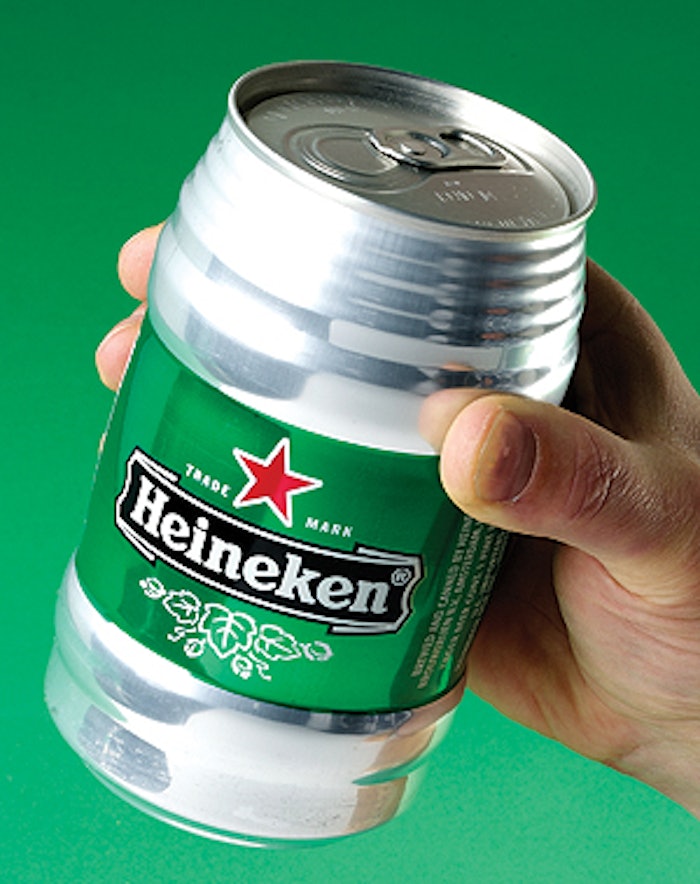 The two-piece cans are made at the Botcherby, England, plant of Crown Cork & Seal (Philadelphia, PA). Manufacturing is done via a blow-forming process that creates a can with a 307 (3 7/16”) diameter.

Unlike more common mechanical forming that uses a mandrel, the blow-forming process eliminates tooling touching the inside of the aluminum. Instead, air pressure expands a metal perform against a mold, similar to a plastic molding process. Crown Cork & Seal uses 0.35-mm-thick coil to make the can bodies, which have a wall thickness of 0.0055” to 0.006”. Ridges stretching around the can near both its top and bottom give the silver can a keg-like appearance. The aluminum is dry-offset printed in four colors around its waist area.

At this time, cans are produced at 60/min rates, according to Crown Cork & Seal. It’s believed that if the 24-oz cans do well in the market, they would be produced on higher-volume equipment, as is the case for the 12-oz keg can introduced in 1999 (see packworld.com/go/c065). That can is now made at speeds around 1ꯠ/min via the blow-forming process.

Meanwhile, the new 24-oz can is filled at Heineken Brouwerijen B.V., Amsterdam, Holland, reportedly on a new line that also accommodates other can sizes. After filling, the plant seams on a 300 (3”)-diameter aluminum pull-tab end.

“We were very pleased with the success of the 12-ounce can, and I think it put to rest the notion that you couldn’t do well selling imported beer in cans in the United States,” says Dan Tearno, vp of corporate affairs for Heineken USA. “This can was introduced last August, and is sold nationwide, primarily through convenience store and gas station channels.” —JB