Pewter isn't only for tankards 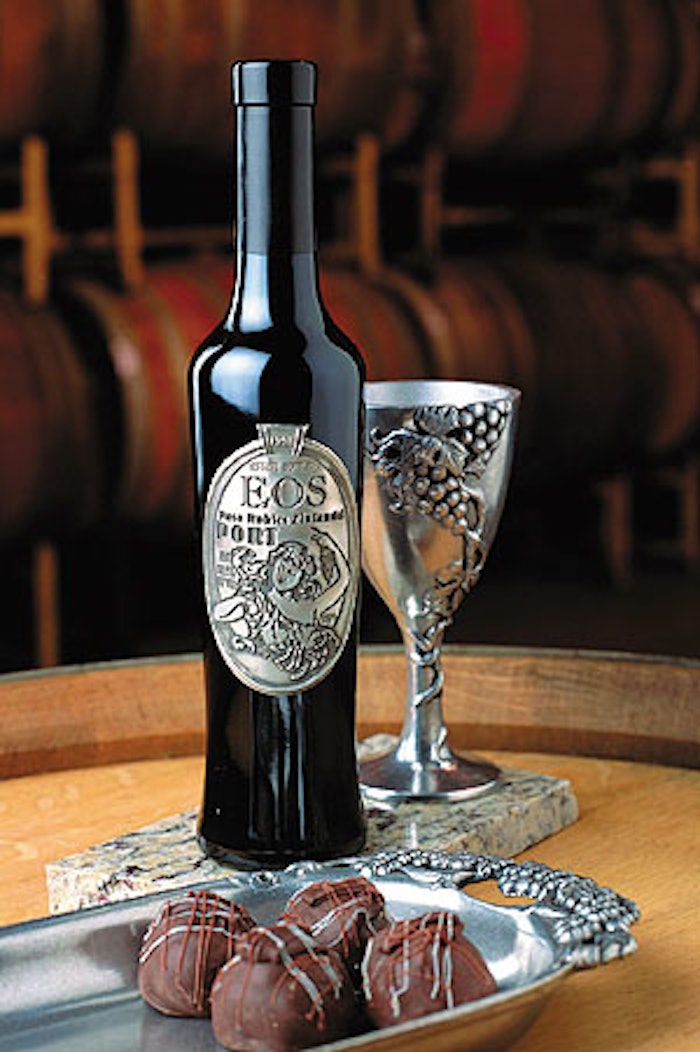 Tankards and picture frames made of pewter are common enough. But EOS Estate Winery, Paso Robles, CA, is using a pewter label on its bottles of port wine.

They have their reasons, according to Kerry Vix, EOS general manager and partner, At about $1/label, it’s not a material for the faint of heart or the faint of budget. But when EOS winemaker Steve Felten created this zinfandel-based port, Vix knew it demanded something special in packaging.

“We wanted something that people would have to pick up and say, ‘Ooh, wow, look at this!’” Vix reports. Along with his son Christopher, director of marketing, and graphic designer Mark Folkrod of Artfarm Studios (Atascadero, CA), Vix made up the team behind EOS Paso Robles Zinfandel Port and its unusual package.

Eos, according to Greek mythology, is the goddess of dawn, which personifies a new beginning or new start. So when the Vix family took over the winery, EOS became the flagship brand. It’s also an acronym for Exceptional Onological Series, and onology is the European spelling for enology, the study of wine. So it really has a double meaning for the central California Coast vintner.

Four years ago, Felten produced a scant four barrels of port, just as an experiment. The winery bottled those four barrels after it was aged for two years. “It sold very quickly through our visitor center and in our wine club,” Vix says. “So we knew we had a new product. In total, the barrels yielded just 200 cases of port.

EOS bottles the new port only in a 375-mL bottle that it retails for $27. So it’s not a product for mass consumption. In fact, the winery tightly controls where the product is marketed because it is a specialty.

But that price gives the winery the latitude to be somewhat extravagant in its packaging. The Vixes and Folkrod went to APM (Benicia, CA), a packaging supplier that has a showroom of bottles and other packaging components. Since port is not a product that has a predetermined bottle shape like Bordeaux red wines, the winery had few strictures about the bottle.

In the end, it selected an antique green bottle in a graceful tapered shape that APM imports from Italy. Once the bottle was chosen, Kerry Vix recalled that he had seen some samples of pressure-sensitive labels made of pewter, distributed by Demptos (Louisville, KY).

“The challenge was to come up with something dynamic that reflected the EOS brand image, while keeping within the constraints of the material,” says Folkrod. “Because the stamping die was flat, I determined that the graphic had to be simple, high contrast and with no tones whatsoever.”

Using artwork that Folkrod created and supplied, Demptos worked with its France-based label converter in refining the art and the dies for embossing and cutting to meet the requirements of the winery within the limitations of the process in France.

In fact, about the only requirement on packaging for the new product was its ability to be bottled on the packaging equipment at the winery. “Remember,” Kerry Vix advises, “this is really a fill-in product for us. It’s not like we package this all at once. When we have a slowdown on our regular bottling operations, we’ll fill the port. Then, when we find a couple of employees with some slack time, we have them do the labeling, which we have to do manually.”

EOS has the vintage year stamped into the shield at the top of each label. The basic art reflects an image of Eos, the goddess, in what Vix calls a “more youthful, playful” way than the true mythological matron of five sons. “We wanted a more youthful woman to project something that was more fun and filled with enthusiasm. That’s the fun part of mythology,” Vix says with a twinkle, “it can be interpreted.”

Vix also says that the 375-mL size is becoming more important to the wine business. It’s become more common in restaurants, airlines are also ordering the “split” size, and he says it’s also more popular at retailers that serve neighborhoods of apartment dwellers. EOS fills still wines such as cabernet, chardonnay, and zinfandel varietals in this size, so the bottling line had starwheels to fit the bottle.

“This product certainly pays for itself, even though the labeling operation remains manual. Part of that is because the label is supplied flat. It measures what Curt Alger of Demptos says is 0.22 mm thick, or approximately the equivalent of 8 mils. It’s made of 99.7% tin, with antimony and other alloy metals, he says.

Although Vix says the label shape was “dimensionalized” to adapt to the taper of the bottle, it wasn’t engineered for the specific bottle. “However,” says Vix, “it’s flexible enough so the person applying it can mold it around to conform to the bottle. It’s sturdy enough to have body and rigidity, but it’s malleable enough to be molded around the bottle.” And the adhesive is aggressive enough to hold the heavy label in place.

In round numbers, each label costs EOS about $1, “so we’re very careful about ordering them,” says Vix. “If we find we ordered too many, we’ll use the extra labels to adorn a press kit for a wine writer, for example.”

Still, he says the packaging more than pays for itself. “The packaging is obviously an attention-getter,” Vix concludes. “When we take it to the trade at a wine tasting or trade show, the first thing people notice is the package. And then they want to try the product.”

This year, EOS will produce about 40 barrels of its zinfandel port, still just the proverbial drop in the pewter tankard. But thanks to artful packaging, every bottle makes a strong statement wherever it’s seen.