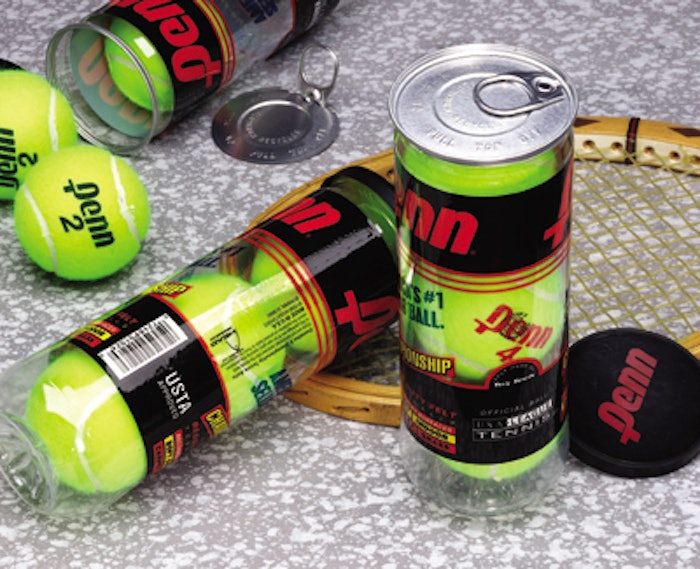 Like the trimming machine that preceded it, the Belvac Model DT/FT 200 represents the final step in manufacturing widemouth PET containers. It’s used to shape the finish of a container so that a metal end can be seamed on as a lid.

Costing about $145ꯠ, the Belvac machine was a sound investment. Since it was installed, O-I has gained a 20% increase in throughput and a 20% reduction in scrap. O-I can output over 100 million containers annually utilizing the trimmer.

But it isn’t just efficiency that’s been boosted since the new equipment arrived. According to Tom Vondrasek, O-I plant manager, quality of trim has also been improved. He adds that this is critical in ensuring consistent seal integrity from container to container.

At Phoenix-based Penn Racquet Sports, operations manager Terry Truett knows the value of reliable seal integrity. Penn’s tennis balls are packaged in containers made by O-I. During packaging, before the aluminum ring-pull end is seamed on, the container is pressurized. Without good seal integrity, the internal pressure could not be maintained, and the quality of the tennis balls would be compromised.

O-I supplies Penn with injection stretch/blow-molded PET containers that hold three tennis balls. The finish of the container is 2.5” in diameter.

For precise trimming of the container, the Belvac-patented trimmer technology has been incorporated into the DT Series to ensure burr- and step-free trimming for PET containers with diameters ranging from 50 mm to 100 mm, and heights between 80 mm and 240 mm.

Previously, O-I used a laser flange-trimming unit that rotated the container while a laser trimmed the excess from the top and the flange in one step. The new machine uses a dual-trim approach. On the first trim, the dome of the blown container is removed. The second trim uses a positive chuck that centers the container in place while secondary knives remove the flange to the desired specification. O-I runs the machine at up to 200 containers/min.

“The flange trimmer removes a last ring of plastic to create a flange similar to that created for a soda can, which allows for a lid to be applied and double seamed,” says Dave Andrulonis, director of food and beverage products. “The better quality in trim day-in and day-out gives our customer a more consistent container and allows them to be more efficient in their lidding operation.”