The productivity increases—7.8% for labor productivity alone, 6.4% for multiple factors—were the results from 808 respondents to a survey conducted by the Packaging Machinery Manufacturers Institute (Arlington, VA). Those respondents, the report notes, are from packaging-dependent industries in the U.S. market.

The multifactor measurement not only considers output per unit of labor, it also factors in wages and benefits, materials usage and costs, and capital input, including machinery and energy and related costs. Meanwhile, PMMI points out, the Bureau of Labor Statistics reported a 3.3% increase in total labor productivity for nondurable product manufacturing; that segment accounted for 95% of packaging machinery shipments in 1999, PMMI reports.

Some 88.6% of respondents said their companies used deliberate steps to improve productivity, nearly 93% focused their attention on labor costs and issues. Of those respondents, automation and training were the most often mentioned methods employed (see Chart 1).

While operator training was cited by slightly more than half, 43.8% had expanded existing company training programs. “The increasing reliance that packaging managers are placing on computer controls and more sophisticated systems,” says the report, “has clearly brought with it the need for better trained operators.”

During the debate leading up to the ergonomics proposal by the Occupational Safety and Health Administration, manufacturers were paying close attention. Over 44% of respondents reported efforts to improve worker ergonomics. Even though that regulation has since been overturned, the report says “Worker ergonomics is given considerable attention in the selection of new machinery by over half the sample.”

Work teams were another factor in improving labor productivity. A total of 52% reported that their companies have already established them or are in the process of developing them. And a resounding 91% of these respondents claimed that work teams have helped their companies increase packaging productivity.

As early as year 2000, three in every ten respondents noted that downsizing was being used to address labor costs. And outsourcing of packaging registered as another approach to the labor issue.

What were machinery issues?

For those respondents whose companies worked specifically on machinery issues (more than 95% of all respondents), speed and flexibility were the most prominent reasons for replacing machinery (see Chart 2).

However, improved maintenance programs and more operator training programs were often mentioned, as was retrofitting existing machinery. In fact, the report states that the number of retrofits performed in the U.S. has been steadily increasing, “largely as a result of the greater availability of retrofit kits offered by packaging machinery manufacturers.”

In looking at packaging material issues, the most frequently mentioned strategy was renegotiating purchase contracts, but nearly half the respondents reported their companies had redesigned packages and reduced scrap and rejects. Over a third said their companies shifted to better quality packaging material, while nearly four in ten said they had shifted to a cheaper material.

Another aspect studied in the survey was systems operation and performance, including a redesign of packaging lines and redesigned production schedules. 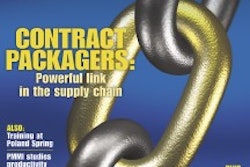 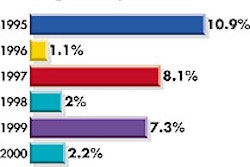 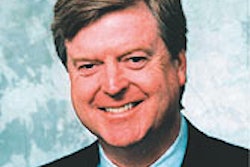