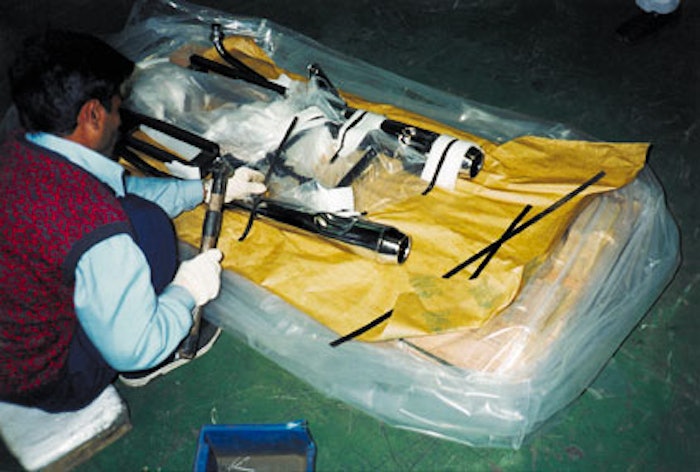 After first covering the pallet with a sheet of corrosion-inhibiting paper, a worker nails down the plastic strips that keep lar

Partially assembled motorcycles from Hero Honda Motors in Haryana, India (about 43 miles southwest of New Delhi), can be exposed to five weeks of hot, humid weather before they reach Honda dealers in Bangladesh, Sri Lanka and South America. The packaged parts suffer through salt air, fluctuations in temperature and humidity, leaks and condensation during their ocean voyage, all of which can speed the onset of corrosion.

At Hero Honda’s facility, 15 employees work to wrap and ship between 50 and 100 dismantled motorcycles per day. Zavenir provides precut sheets of 35# Uniwrap® A paper as required by Hero Honda for its different-sized parts. The most frequently used size is 36”x60”.

Preparing the motorcycles for shipment involves layering the multiple components of two motorcycles on the limited space of a 67 ?”x29 ?” wooden pallet. First, a worker places the pallet in a large, clear, low-density polyethylene bag. Then he covers the pallet with a sheet of Uniwrap A paper. Larger components like exhaust pipes are secured with thin plastic strips nailed to the pallet. The smaller components of the bike are secured in 72”x42”x30” corrugated shippers, then covered with Uniwrap A. Next, metal frames are nailed to the pallet, and the front axles and the back wheels of the two bikes are mounted on these frames, which hold the bikes in place. Another sheet of Uniwrap A is placed on top of the bike, and several workers pull the large LDPE bag over the two bikes. Finally, plywood is nailed to all four sides of the pallet and the top, making a complete wooden box ready for shipment.

When the parts are wrapped in the corrosion-inhibiting paper, the paper’s chemicals, which are attracted to metal, adhere to the parts and form a protective molecular layer on the surface of the metal. This protective layer prevents moisture, salt, dirt and oxygen from being deposited on the metal and causing corrosion. When the parts are unwrapped at their destination, the molecular layer quickly dissipates into the atmosphere, so cleaning isn’t necessary.

Srivastava says he’s saved money in labor since he’s been using Daubert VCI’s paper, plus he hasn’t experienced a single problem with corrosion on Honda’s motorcycles.

Chicago's own legendary STYX brings over four decades of hits for a good cause.
Sean Riley
Jun 20th, 2022
More in Home